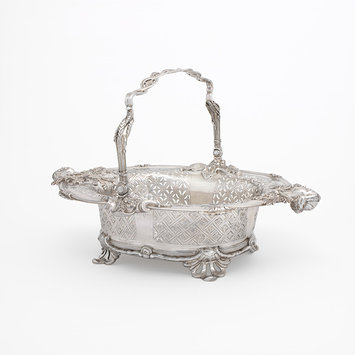 Trained as a silversmith in Liège, Nicholas Sprimont worked in London from about 1742. His interests ranged widely, and by 1745 he had begun to move into porcelain manufacture, meaning his plate is now extremely rare. This basket is one of a pair, the other being found in the Ashmolean Museum, Oxford. Both have clearly been well-used and much repaired.

When the Catholic King Louis XIV revoked the religiously tolerant Edict of Nantes in 1685, Huguenots (French Protestants) were forced to leave the country. Many were craftsmen who settled in London. Their technical skills and fashionable French style ensured the luxury silver, furniture, watches and jewellery they made were highly sought after. Huguenot specialists transformed English silver by introducing higher standards of craftsmanship. They promoted new forms, such as the soup tureen and sauceboat, and introduced a new repertoire of ornament, with cast sculptural details and exquisite engraving.

A silver, oval basket standing on four pierced stylised shell feet, with moulded auricular scrolls around the base. The straight sides of the basket are pierced and engraved with four panels of trelliswork and rosettes. The spreading rim has a head of Ceres between sheaves of wheat at each end; around the rim is a moulded border modelled at intervals with shells and foliage and with applied scrolls and flowers at the base of the handle. The swing handle is modelled with ears of wheat on the lower parts and is pierced and chased with ovals and ears of wheat above. The centre of the basket is engraved with similar trelliswork and rosettes and with two rococo cartouches in a drapery mantle, each engraved twice with a later monogram AFW.

Engraved with a monogram: AFW

Bread basket
About 1745
Trained as a silversmith in Liège, Nicholas Sprimont
worked in London from about 1742. His interests ranged
widely, and by 1745 he had begun to move into porcelain
manufacture.
London, England; Nicholas Sprimont (1716–71)
Silver
Museum no. Loan:Gilbert.734-2008 [2009]

Nicholas Sprimont worked in London for only about four years, from 1743-1747, before abandoning the goldsmith's trade for the manufacture of porcelain. (Schroder, p.284) 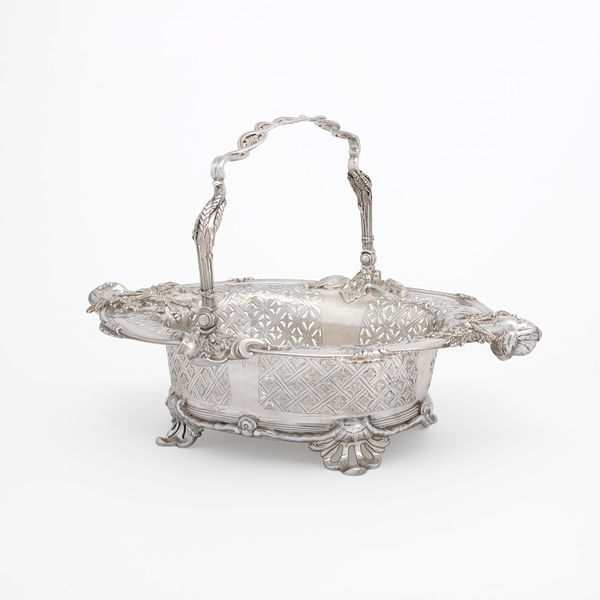