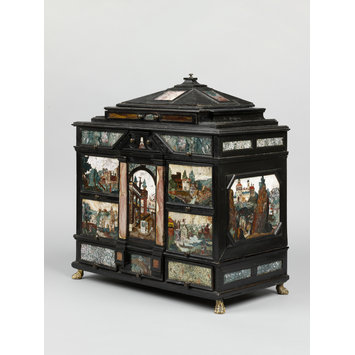 Pietre dure means ‘hard stones’ in Italian. Mosaics of hardstones, or commessi di pietre dure, were made during the Roman Empire and throughout the medieval period. But it was not until the Renaissance in Florence that the technique was perfected, under the impulse of Ferdinando I de’ Medici (r.1587-1609), Grand Duke of Tuscany who united the city’s workshops and channelled their creativity into one organisation, the Opificio delle Pietre Dure.

This cabinet was produced by the renowned Castrucci workshop. Originally from Florence, the Castrucci family settled in Prague and worked under the patronage of Holy Roman Emperor Rudolph II. Their use of native stones, most notably a wide array of jaspers, made their creations particularly prized in European courts. The quality of their work became a statement of the splendour of Rudolph’s dominion, expressed through his empire’s natural resources.

Holy Roman Emperor Rudolph II (1552-1612) invited the Castrucci family from Florence to settle in Prague, the capital of his Empire, and to establish a specialised pietre dure workshop at his court. They worked with indigenous stones, particularly colourful jaspers, mined from quarries across what was then the Holy Roman Empire, precisely from its western borders (now French Alsace-Lorraine) and Bohemia in the east.

Before establishing his own centre of production, Rudolph had commissioned work from the Grand Ducal workshops in Florence and from stone carvers in Milan, sending his imperial stones to be incorporated into their designs. He had a keen interest in mineralogy and his personal collection included stones from countries that were far from his own kingdom. Rudolph’s patronage of pietre dure, and importantly also his desire to utilise local imperial stones, extended the taste for hardstone mosaics beyond Italy .

Whilst the exact date upon which the Castruccis arrived in Prague is unknown, in 1592 Cosimo Castrucci is documented as ‘his majesty’s inlayer of hardstones’. After Cosimo’s death in 1602, his son Giovanni continued the production of works in pietre dure from the Castrucci workshop. He travelled frequently and established himself as a trader of stones between Bohemia and Florence via Idar Oberstein. It has been observed that the workshop’s output from this time repeated motifs and styles, tending to decoration rather than a desire to achieve the three-dimensional illusion of Cosimo’s landscape commessi.

The death of Giovanni Castrucci in 1615 was followed, just four years later, by the death of his son. Work on an outstanding commission for the Grand Duke of Tuscany, Cosimo II was completed instead by Giovanni’s son-in-law, Giuliano di Piero Pandolfini. This project illustrates just how desirable and renowned the Castrucci workshop’s pietre dure had become: now even the Florentine Duke, despite having his own court workshop, sought commissions from Prague.

The panels on this cabinet demonstrate how larger stones were used to denote foreground alongside smaller pieces to capture the receding perspective of the landscape. The Castrucci workshop was particularly expert in utilising the natural markings, patterns and shades of stones to depict contrasting light, shade, texture of surface and directional movement. In the top right commesso for example, the streaked jasper depicts the flowing water of a river.

It has been said that the commessi from Prague and from Florence have notable technical differences, which shows the independence of the Castrucci workshop from its Florentine counterparts. In Prague, the pieces of stone that were laid were of varying thickness, with ground undersides and bevelled edges. Due to these discrepancies, a thicker layer of adhesive was required to fix the stones to their slate supports than in Florence, where the stones were cut to a more uniform thickness. In Prague, holes were drilled into the slate backing, which likely helped the thick adhesive layer to dry.

The landscape scenes were inspired by engravings by the Flemish artist Aegidius Sadeler (1570-1629), in turn taken from designs by Pieter Stevens (circa 1567- died after 1624). Both artists were based at the royal Prague workshops in the early 17th century.

The left front of the cabinet is mounted with a view of Krumau/Cesky Krumlov in Bohemia with two hooded monks under a stone arch in the foreground.

Rudolph Distelberger attributed the panels to Cosimo Castrucci the Elder, circa 1610 when he examined them in Los Angeles in 1988. 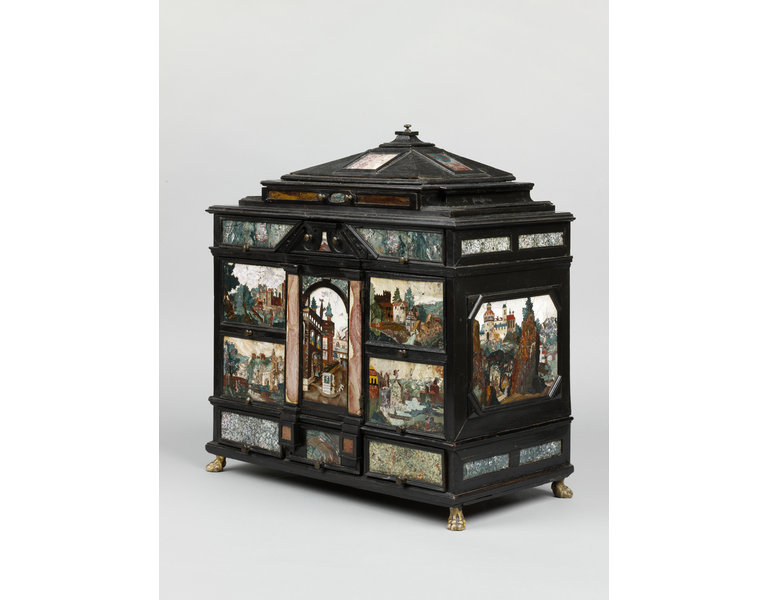