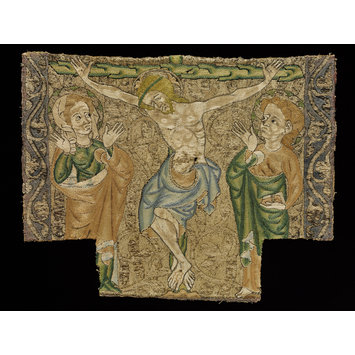 Embroidered on linen with coloured silks in split stitch with a patterned background in couched work of gilt thread.

The history of the object prior to acquisition is recorded in V&A Nominal file MA/1/S3781.It was acquired at the same time as T.57-1913 although of a different date. They were bought from A. E. Street, son of the architect G. Edmund Street. The justification for acquisition was as follows:

'These remarkable specimens of English embroidery were formerly the property of G.E. Street the celebrated architect (d. 1881) and are now offered on sale to the Museum by his son for £200 (RP 860M/13). They now form the front and back orphreys of a chasuble made of modern pink silk. The cross-shaped orphrey is of late 13th century work, thus belonging to the finest period of English embroidery. The centre panel represents the Crucifixion, with the Virgin and St John at the foot of the Cross. To the right and left are 3/4 length figures of SS. Stephen and Lawrence. The upright arm of the Cross is formed by a double band representing 6 standing figures under slender Gothic canopies. Three have crowns and sceptres; these are the ancestors of Christ, of the royal line of Judah. The other 3 are nimbed, and hold books. These are either Apostles (as witnesses of Christ), or Old Testament prophets - more probably the latter, who are sometimes represented nimbed as prefiguring the Apostles and foretelling the advent of the Messiah. The patterned background in gold thread embroidery is a very beautiful feature.

The short pillar orphrey is more fragmentary, of less importance, and about a century later in date. It represents the Virgin, St Helen and St Andrew under canopies.

I believe the cross-shaped orphrey to be the most important specimen of English embroidery which has appeared in the market since the Spitzer sale in Paris in 1893, when a fine piece, of the same period, was acquired by the Lyons Museum. Mr Street says that the piece he offers has been put by in a drawer for many years. There is no doubt that if he were dipsosed to advertise it widely he would obtain a far higher figure for it. In arriving at a valuation, Mr Street's statement (RP 655/13) that he is "prepared to let the Museum buy at a lower price than others" has been borne in mind. Col. Croft Lyons has kindly assisted in the negotiations, and you will remember that he expressed the keenest desire that these embroideries should pass into the Museum collections. Mr Street states that he is willing to wait for the money, but he wishes to know without delay whether they will be bought (RP 899M/13). It would be a great satisfaction if these embroideries could be definitely placed beyond the reach of those who, if they should hear of them, would be sure to make very tempting offers to Mr Street.. A. F. Kendirkc, 24 Feb.' Payment was deferred until the new financial year which began on 1st April.

Embroidered with silver-gilt thread and coloured
silks in underside couching and split stitch on linen. 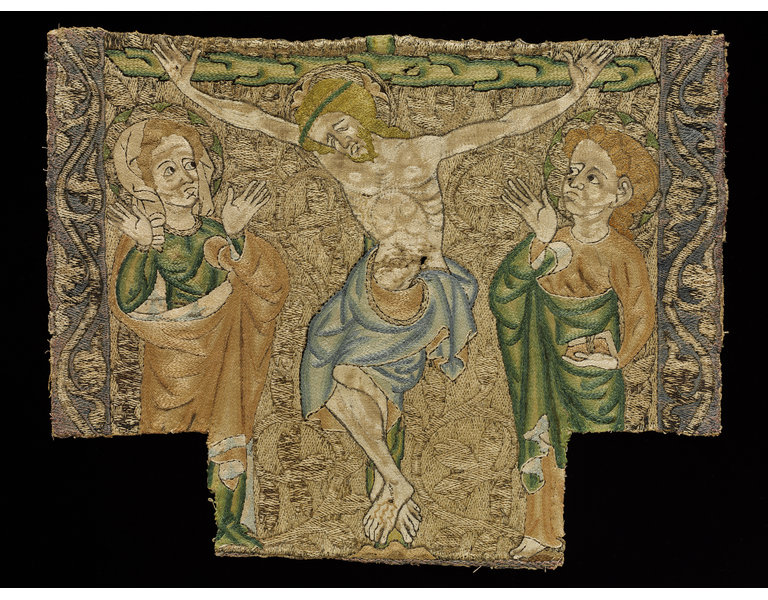