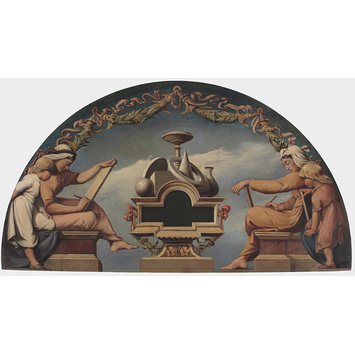 Two female figures and two children. Woman and child sat at each side facing in and drawing from composition of cones and spheres centrally placed against backdrop of sky. Scrolls and ribbons frame top of lunette.

Model Drawing was commissioned to decorate one of eighteen lunette-shaped recesses in the upper portion of rooms 100 and 101 (at that time the National Competition Gallery). The lunettes were removed just before the Second World War and placed in store.

Model Drawing, designed by Godfrey Sykes and painted by J. Emms, differs compositionally from the other lunettes in that the objects studied, rather than the artists, are placed firmly at the centre of the image. The cube, cone, sphere, disc, hoop and vase shape are arranged like a still-life on an elaborate table. The background of sky implies that this group is elevated, and above the table hang swags and fluttering ribbons. The props on the table were an important part of basic art-school education in the 19th-century, and represent the kinds of object, known as 'type solids', which were given to students to copy at the very beginning of their training, even before they began to draw from plaster casts of ornament or antique sculpture. By copying three-dimensional objects with pencil and chalk, students learnt how to create the illusion of volume in two dimensions with gradations of shading. Copying these basic forms was therefore at the very foundation of art-school training, and their exalted place in this lunette refers to their great symbolic significance.

Sykes's preparatory study for this painting (museum number 8142) has an inscription in the central cartouche which reads 'STAGE III / MODEL DRAWING', a direct reference to Regrave's National Course of Art Instruction. This inscription is absent from the oil painting. This was the first lunette produced for the Competition Gallery, and its qualitative difference from the others suggests that Sykes proposed a more rigidly programmatic decorative scheme than that which was eventually produced.

Godfrey Sykes (1824-1866) was a key figure in the decoration of the South Kensington Museum. Having begun his professional career as an apprentice to a Sheffield engraver, and later worked for himself designing showcards and silverware, in 1843 he enrolled at the newly-opened Sheffield School of Design. This was one of the government schools established to enable working craftsmen to learn the elements of design. Sykes was appointed assistant master at the school in 1856. His association with the Museum began in 1859 when he was recruited by Henry Cole to assist with the decorative schemes for the 1862 Exhibition (the successor to the Great Exhibition of 1851) and the new Horticultural Society's garden buildings. Sykes's use of terracotta for external decoration prompted the decision to use it for the new museum buildings. As John Physick notes, 'Sykes was so highly regarded that the Board decided that "his views on questions of decoration [were] to be adopted in future."' (Physick, p, 58.) Sykes went on to design elaborate decorative schemes for the principal parts of the new museum buildings: the North and South Courts and the Prince Consort's Gallery.

Only three years before his own early death in 1866, Sykes designed the tomb in Kensal Green cemetary of another artist whose work was exceptionally well represented in the Museum's collections, William Mulready (1786-1863).

Paintings; The Great Exhibition; History of the V&A Fabric of the Building 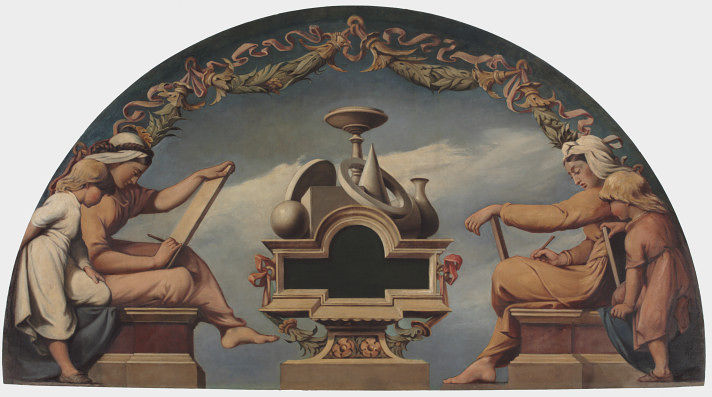