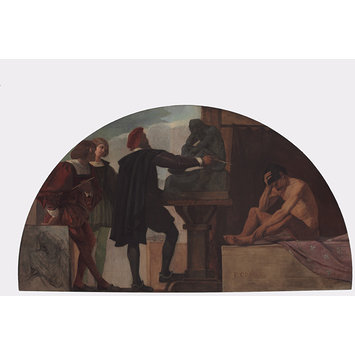 Three figures on the left in Renaissance costume. The right hand figure in this group creates a sculpture from seated nude model on the right. Signed 'E. Crowe' in bottom right corner.

'E. CROWE'
Signed by the artist in bottom right corner

Modelling from Life was commissioned in 1868 to decorate one of eighteen lunette-shaped recesses in the upper portion of rooms 100 and 101 (at that time the National Competition Gallery). The lunettes were removed just before the Second World War and placed in store. This painting, along with the eight others made for the west wall of room 101, was conserved and reinstalled in its original location in August 2010.

The various artistic activities represented in the paintings are set within relevant historical contexts; each takes place within the period and place considered to have fostered its inception or its apogee. So drawing the skeletal structure of the body is set in Renaissance Florence; still-life drawing is given a 17th-century Flemish setting; and landscape sketching takes place in 19th-century England. Eyre Crowe's Modelling from the Life follows this scheme by representing Michelangelo sculpting a male nude directly from the life. The model was posed by Sapper Nellis, one of the Royal Engineers who acted as clerks, storemen, model-makers, sweepers and firemen at the South Kensington site (Physick (1982), p. 84) .

Although born in London, Eyre Crowe (1824-1910) spent his early years largely in Paris, and in 1839 entered the studio of the celebrated French history painter Paul Delaroche. He later settled in London and registered at the Royal Academy Schools. The first painting he exhibited at the Royal Academy was a historical genre painting, Master Prynne Searching Archbishop Laud's Pockets in the Tower. He became secretary to his cousin, the novelist William Makepeace Thackeray, and accompanied him on a lecture tour of America in 1852 as his 'factotum and amanuensis'. After his return to England, Crowe built a successful career as a painter of genre and historical subjects, often drawing on 18th-century literature. He exhibited annually at the Royal Academy from 1857 to 1908, but never attained the rank of Academician. He was an 'honorary member' of the St John's Wood Clique.

From 1859 Crowe acted as occasional examiner and inspector of the Government Schools of Art. In addition to this involvement with the South Kensington Museum, he was asked to design mosaics of William Hogarth and Sir Christopher Wren for the 'Kensington Valhalla'. 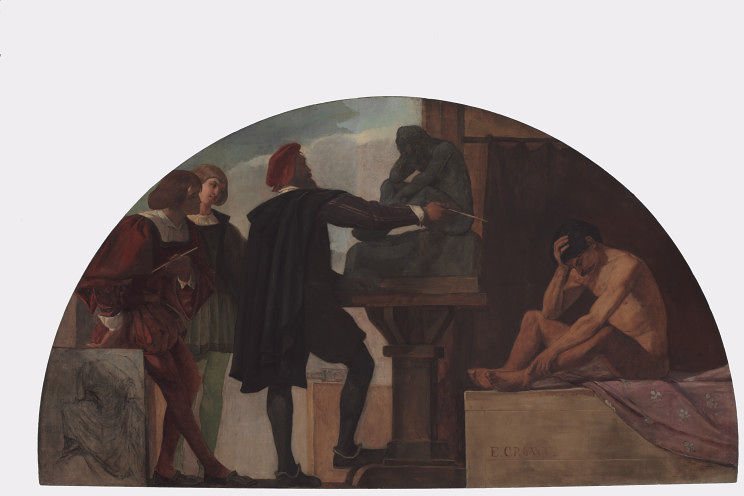