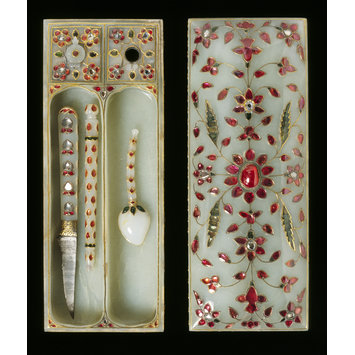 This pen box containing small utensils necessary for the preparation of pens and ink was almost certainly made in the ateliers of the Mughal court in the second half of the 17th century. Nephrite jade imported from Khotan was a rare material in the first half of the century, but following the re-opening of trade routes through Kashmir, it became increasingly available to the royal artisans. Such an opulent piece, set with rubies, emeralds and diamonds of good quality and shaped with considerable skill, was probably made as an emblem of office. It would perhaps have been given to a newly appointed Vizir, or Chief Minister.
The pen box was acquired in the mid-19th century by the great collector of Mughal hardstones, Colonel Charles Seton Guthrie, and sold by him to the Indian Museum, London, in 1868. In 1879, his collection was transferred with other parts of the Museum's collection to the South Kensington Museum, later renamed the Victoria and Albert Museum.

Rectangular box of white nephrite jade set with rubies, emeralds and diamonds in gold. The lower section has a central dividing rib and two small inkpots with hinged covers, one of which is missing. It contains a small knife, pen holder and spoon, all of jewelled jade. The knife has a steel blade overlaid in gold. The cover has a design of flowers, leaves and palmettes of rubies, diamonds and emeralds in gold; the large central blossom is set with rubies.

Mughal empire (Almost certainly made in the imperial workshops) 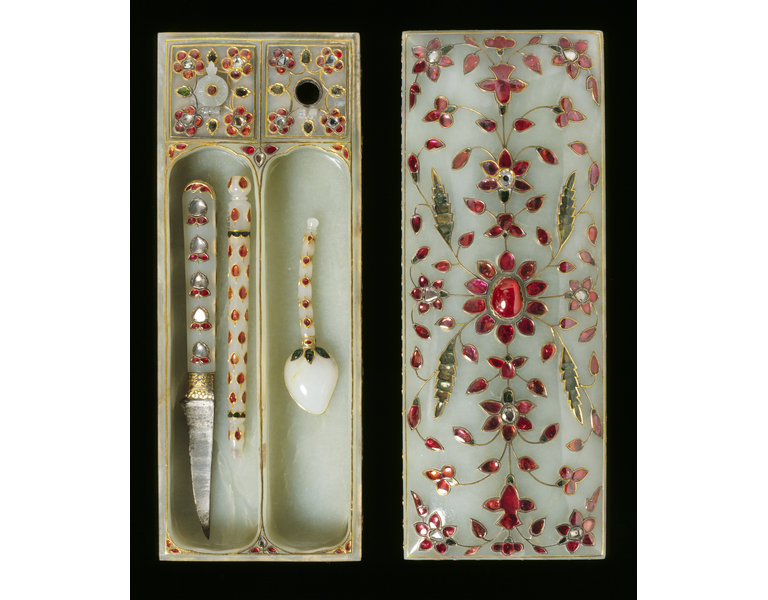