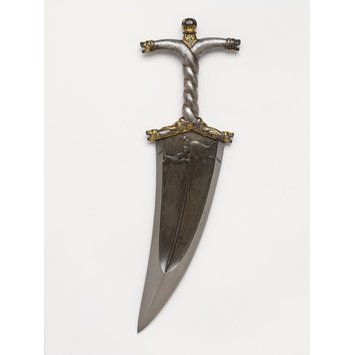 The form of this dagger, with its twisted grip and short quillons on the hilt, can be found in Mughal painting dating to about 1600. The blade is of watered steel – a high-furnaced metal with a surface finish resembling watered silk. It has a thick, armour-piercing point and is very finely chiselled on both sides with small scenes at the forte – the part of the hilt immediately beneath the blade. On one side, a figure mounted on an elephant spears an attacking tiger; on the other, an elephant and horse, both with riders, are shown fighting. Beneath the tiger are drilled numerals typical of those found on weapons dispersed from the royal armoury of Bikaner, Rajasthan. The dagger was originally overlaid with gold over much of the hilt and on the chiselled decoration of the blade, though much of this has worn away. The weapon is a rare survivor of what must have been a vast production of steel arms and armour for Akbar’s court, and for the Rajput kingdoms that capitulated to him. Abu’l Fazl, the historian of Akbar's reign, mentions several specialist arms and armour centres in his survey of the provinces of the empire.

The watered steel blade is finely chiselled at the forte on both sides with scenes depicted in miniature: on one side, a figure mounted on an elephant spears an attacking tiger; on the other, an elephant and horse, both with riders, are shown fighting. The quillons and finial have traces of gold, formerly overlaid on a cross-hatched ground.

Drilled numerals beneath the tiger are an old armoury inventory mark

Acquired on the London market in 1981. The drilled numerals are typical of weapons from the Bikaner armoury. 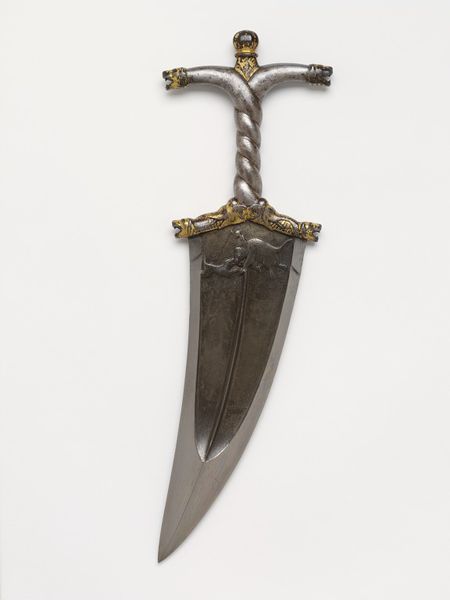