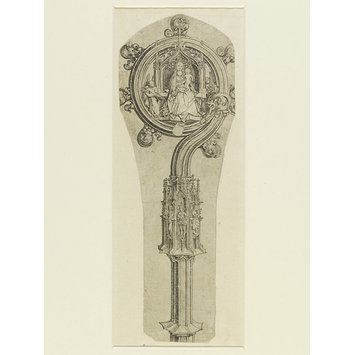 This engraving depicts a bishop's crozier. The curl of the crozier is decorated with seven crockets (although this print has been cut irregularly following the shape of the crozier and through three of the seven crockets). Four tiny male figures climb through the tracery on top. At the centre of the crozier are the crowned Madonna, seated on a throne between two angels playing a lute and an organ. The Madonna holds the naked Child who is standing and blessing. A blank shield rests on the bottom of the circle, ready to receive the bishop's coat of arms. The polygonal shaft of the crozier rises through an architectural section fitted with niches with small figures beneath Gothic arches with finials, showing St Margaret, a king with a sceptre and orb and St Barbara, standing on consoles.

The print has been cut in half at some stage and given A and B numbers (14001A and 14001B). The two halves have been stuck together.

Signed with the monogram 'M+S' in the lower centre of the plate.
The monogram of Martin Schongauer appears at the bottom of the print in the centre. The monogram consists of Schongauer's initials and a goldsmith-like hallmark composed of a small cross plus the crescent from his family's coat of arms. This signature occurs in two forms: a few plates, apparently all done in the early 1470s, have an M with vertical sides; the majority, as in this example, have an M with slanting sides. (The Illustrated Bartsch, Vol.8 Part 1, pg. 1).

'...[Max] Lehrs was also convinced that the 'Crosier' and the 'Censer' (.106) offered evidence that Schongauer had actually been trained as a goldsmith to some extent in his father's workshop - another reason for an early date.

It is certainly true that a goldsmith must work from a drawing, and that this print would offer the possibility of multiple copies of such a design; however, it has more recently been pointed out that neither documentary nor physical evidence exists to show, either that Schongauer had actually trained as a goldsmith or that the present design was ever actually used as a model by a goldsmith. In this regard it is useful to recall that painted and sculpted bishop-saints were much more numerous than real bishops and that each of them required an elegant crosier, often executed in gold leaf. Harmut Krohm (1994) has made the valid point that both the crosier and the censer were created by Schongauer as works of art in themselves, without reference to specific usage, and that they both were probably used as points of inspiration by other artists and craftsmen in just the same way as medieval model books had been used before the invention of engraving. ....'
(The Illustrated Bartsch; 8 Commentary, Part 1; .105; page 264) 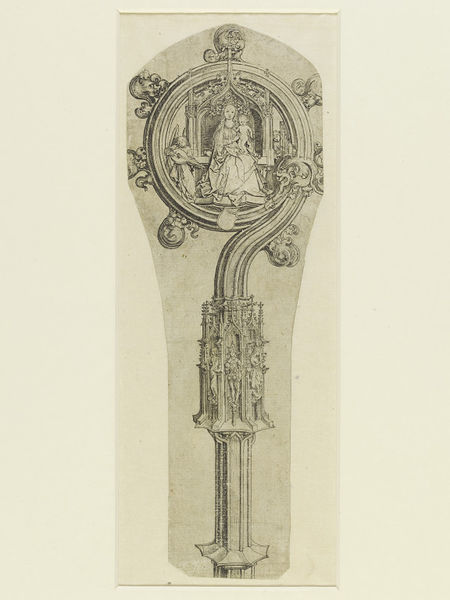