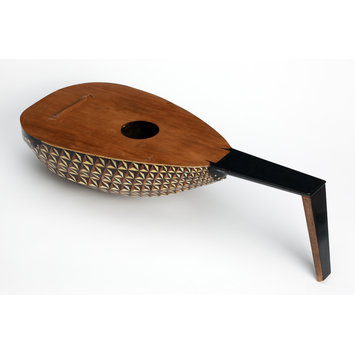 Instead of being composed of ribs of wood, as would have been more normal, the body of this lute is made up of a mosaic of woods forming a star pattern and held in position by ribs of parchment, glued to it from the inside. Marx (or Max) Unverdorben was of German origin and made lutes in Venice, where he is thought to have been a pupil of Laux Maler, the greatest luthier of his day. Unverdorben was active from about 1550 until 1580, and one of his lutes was included in the 1556 inventory of Raymund Fugger, a member of the famous banking family of Augsburg.

Lute body with modern, reconstructed soundboard and neck, but without stringing. Wtih a turned ivory peg to which a neck strap could be attached.

" ... only the body is original. This is constructed of a mosaic of ivory and two sorts of wood [three woods have been subsequently identified: walnut, yew and ebony.] in an overall star pattern, glued to strips of parchment. There is no supporting material, but the body is surprisingly rigid, though it has become distorted in places".

"During the course of the conservation/ restoration programme, it became apparent that certain instruments had been reconstructed during the l8th century in order to look 'modern'. For example, the lute by Max Unverdorben (Venice, mid-16th century) (193-1882) and also that by Laux Maler (Bologna, 16th century) (194-1882) were fitted with a guitar neck and belly to give them a more fashionable shape, able to play the contemporary music of that period. Unverdorben was probably a pupil of Maler. The Unverdorben lute differed from the Maler in that the bowl, decorated in ebony, fruitwood and ivory mosaic patterns, was built on a parchment mould, whereas the Maler bowl was built up on wooden ribs of sycamore. With time, the Unverdorben had caved in, while the Maler had split along the grain of the wooden ribs. On the Unverdorben, the base of the instrument had been pressed in (nearer to a guitar shape) and decorated with a pair of fan-sticks made of horn. These "foreign bodies" had to be removed before the re-shaping to the original line could take place. Once an internal lining of a later date was removed, a new pine lining (c .1 1/4” wide) was glued on the inside to hold the base out to its original line. After this work was completed a mock-u p neck and finger-board were constructed and fitted to this instrument and later a new belly in pine. Restoration of the damaged/ missing mosaic surface was undertaken in the relevant materials. The Maler was also given a new neck and fingerboard. These reconstructions, returning the two lutes to their 16th century shapes, were made for the benefit of students to enable them to gain an impression of how the instruments would have looked."

Unverdorben, Max or Marx (Made)

MarxUnverd.... in ....netia
Marx Unverdorben in Venice.
Label on inside of ribs

This instrument formed part of Carl Engel's collection, and was purchased by the Museum for £5 in 1882.

A new soundboard and neck were provided in 1964 and the former (non-original) elements retained.

Attribution note: The woods were identified by Michael Parfett, harpsichord maker, 22 May 2008. 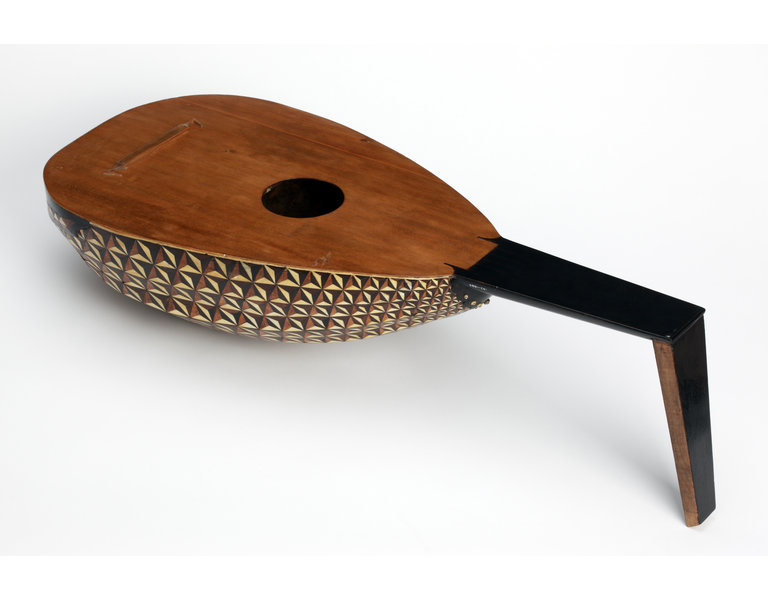