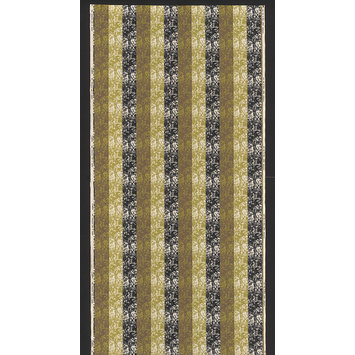 Set of 3 yards of printed cotton furnishing fabrics with printed textures derived from photographic enlargement of organic material such as leaves.

Historical significance: Winner of CoID Design of the Year award, 1957.

In the 1950s Reich widened his activities to include printed fabrics. He did the experimental work himself at Clifford Mill, and had the yardage printed in Scotland. A design for printed cotton from 1957 called "Flamingo" featured textures derived from photographic enlargement of organic material such as leaves. Produced in single colours with a dominant black skeletal image, it won a Design Centre award. This "texture print" led to the "Fotextur" range which featured in a Design Centre exhibition in 1960.

The idea behind the range, to create a set of curtains containing two or more colourways (colour printings) of a certain pattern, was probably too advanced for the consumer. It comprised designs in very large repeat based once again on Tibor Reich's photographic sources, in this case atomic structures. A pattern was produced in 14 colourways and each one included four tones of that colour, for added richness. Alternating lengths of two of these were then hung and used "like a paintbox", blending elements in any given interior, or used to create "moods" by expanding the spread of one or other coloured curtain.

Most of Reich's work, however, was commissioned direct for specific interiors or ranges of furniture. In 1951, as part of the Festival of Britain celebrations, he produced furnishings, "tapestry" wall-hangings and carpets - each named after a Shakespearean character - for the Shakespeare Memorial Theatre. Also in Stratford, he helped to furnish the Shakespeare Centre for its opening in 1964 and designed souvenirs for the centre, some of which are still produced today.

In the 1960s "Tibor" fabrics were in demand in Britain and abroad; the firm opened a showroom in Sloane Street in London, which moved later to Berners Street. The fabrics were used in Lotus cars, in cruise liners, on Concorde and for the Royal Yacht Britannia and the library at Windsor Castle. The name was linked with the furniture manufacturers G-Plan, Ercol and Gordon Russell, and with Russell Furnishing. For Gordon Russell, of Broadway, Worcestershire, Reich produced all-wool coverings that were superbly hard-wearing for domestic, office and contract ranges. They were used for items from classic dining chairs to "low seating" in vibrant colours for halls of residence in the new universities. Reich was awarded the prestigious Textile Institute's design medal in 1973.

He was active in other fields of design throughout his career, producing a series of black and white pottery designs called "Tigo" for Denby in the 1950s and several for carpets. These included his "marble" pattern for Wilton, an abstract expressionist design for I. & C. Steele and Co of Banbury and others for Stockwell Carpets. In the 1970s and 1980s he produced greetings cards based on drawn and photographic images, and recently, in collaboration with his son Alex Reich, he designed a first-day cover to commemorate the opening of the reconstructed Globe Theatre in London; commissioned by the Shakespeare Birthplace Trust, it was one of many he did for them.

In 1978 Tibor Reich closed the textile business which he had run, assisted by his wife Freda, for 33 years. The workforce had grown from half a dozen in 1945 to 80, most of them trained in the firm. His attention switched instead to his model car and transport collection, formed after the birth of his first son, Anthony, in 1948.

Text of obituary in The Independent, February 16th 1996, by Margot Coatts 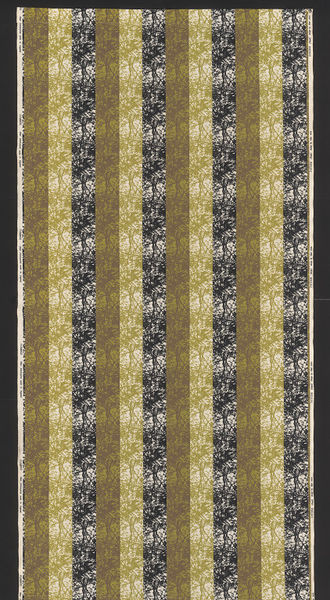