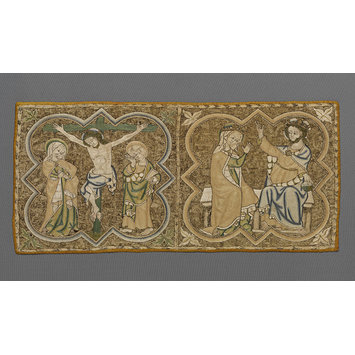 Burses were purse-like pouches used to contain corporals, the linen cloths used in the celebration of the Christian Mass. The surface of this example is embroidered, and is a fine example of Opus Anglicanum (Latin for 'English work'). Such high quality English embroidery was highly regarded throughout Europe. One side the burse shows Christ crucified with the Virgin and St. John, and on the other, the Coronation of the Virgin.

One side of the burse shows Christ crucified, the Virgin Mary and St. John; the other shows the Coronation of the Virgin, with Christ still displaying his stigmata; each within a barbed quatrefoil. The gold background is worked with a pattern of quatrefoils enclosing rampant and passant lions. The linen is embroidered with silver- gilt and silk threads in underside couching, split stitch and laid and couched work. Edged with a narrow border of feather stitches. The burse has been opened out.

Embroidered with silver-gilt thread and coloured silks in underside couching and split stitch, with laid and couched work, on linen.

From a farmhouse near Romsey, Hampshire. The previous owner from whom it was purchased "was under the impression it was worked by her grandmother". (from register)

This burse now forms a flat panel, having been
opened out at some time in its past.

embroidered, 1320-30, English, Cruxifixion and Coronation of the Virgin.

Christie, Grace, English Medieval Embroidery:
A Brief Survey of English Embroidery dating from
the Beginning of the Tenth Century until the End of
the Fourteenth. Oxford, 1938, cat. no. 82
no. 40, pp. 181-183
Browne, Clare, Davies, Glyn and Michael, M.A. (eds.), 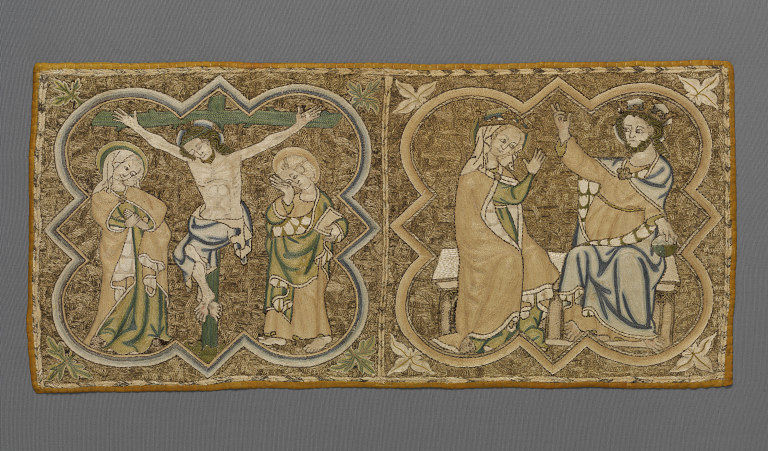