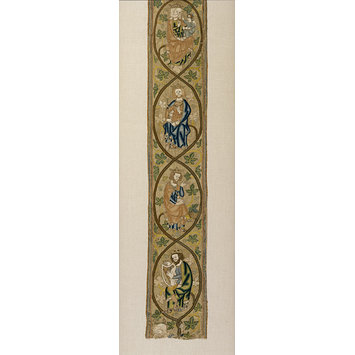 The orphrey depicts the Tree of Jesse (see also 37, 43, 63). Although the piece has been abruptly cut at the bottom (as also at the top), the partial figure of Jesse can still be seen. Above him, enclosed within the tree’s twining stems, are King David, two other kings (possibly Solomon and Rehoboam), the Virgin and Child, and Christ in Judgment. There is a seam in the orphrey above the figures of the Virgin and Child; although the pieces are carefully joined and apparently intended to match, it is clear that the upper piece, depicting Christ, was not made with the rest of the orphrey, being worked slightly less skilfully on a different linen ground. The background is embroidered in underside-couched silver-gilt thread, with slight variation in its simple patterning between the inside and the outside of the enclosing vine branches. The figures are embroidered with coloured silks in split stitch, and every available gap in the design is filled with vine leaves and grapes, some in raised work. When this orphrey was acquired by the Museum, it formed part of the cross orphrey mounted on the back of a modern chasuble (illustrated in that state in Christie 1938, pl.lxx); a pillar orphrey on its front was embroidered in a different style with scenes from the Life of the Virgin and of Christ (now mus. no. T.72a-1922). Two small panels depicting supporting angels, which had been added to the Jesse orphrey to make it cross-shaped, were removed and attached at either side of the Crucifixion on the other orphrey.

Said to have come from a church in Spain;
acquired in Paris by Georges Saville Seligman;
purchased from him by the V&A, 1922

linen embroidered in silver, silver-gilt and silks in underside couching, split stitch and a little raised work; Tree of Jesse

Christie, Grace, English Medieval Embroidery: A Brief Survey of English Embroidery dating from the Beginning of the Tenth Century until the End of the Fourteenth (Oxford, 1938), cat. no. 63; London 1963, cat. no. 60