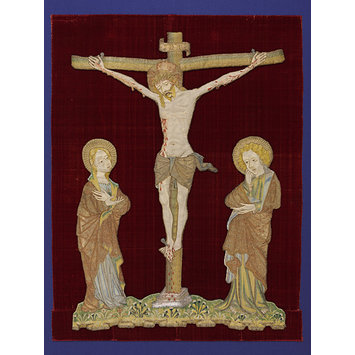 This piece shows three figures from a cruxifixion scene: Christ crucified, the Virgin Mary and St John the Evangelist. They were embroidered in about 1425, probably to be applied to an altar hanging, but were subsequently cut off and reapplied to red silk velvet, which is of a later date. This was a common practise. Expensive ecclesiastical embroidery was often reused, or a vestment or hanging might be cut up to suit changing church fashion. The scale of the figures indicates that the scene came from a sizeable hanging rather than from a vestment and would have been quite visible from a long distance away in a church. Stylistically the scene is late Gothic: the figures are fairly insubstantial with elaborately draped costumes and softly waving hair. It is a fine example of later 'opus anglicanum' (Latin for 'English work'), which reached its peak between about 1250 and 1350.

The embroidery is worked with silk, silver and silver-gilt thread in split stitch and couched work.

White tabby cloth of Z-spun linen worked with white, yellow, green, blue, lilac, pink, red, brown and black silk threads in split stitch, and with silver and gold threads couched with silk of various colours. The cross is executed in a rudimentary form.

Embroidered with silver-gilt and silver thread and coloured silks in split stitch and surface couching on linen, with some padding to produce relief, applied to a later silk velvet ground. 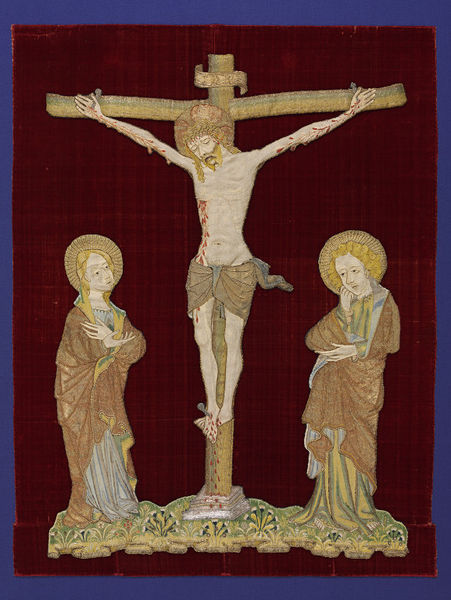