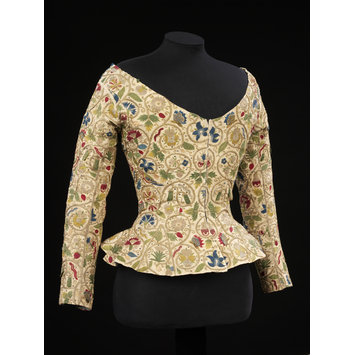 Stylised red and white roses were the central symbol of the 16th century Tudor dynasty. Columbine flower was sometimes seen to signify sorrow. By the early 17th century however, it is uncertain whether such decoration would have had a specific symbolic purpose. It is more likely that the rose and columbine on this jacket, together with the other flowers, are part of the commonplace fashionable floral motifs of the time, when botanical picture books were popular and used frequently as design inspiration. The botanical features include honeysuckle,pansies, carnations, foxgloves, borage, strawberries, cornflowers, rosehips, thistles, columbine and vineleaves. There are also pea-pods which include small silver-gilt thread peas, around all of which there are small birds, bees and worms.

Silver-gilt thread scrolls around the design, and along with small metal spangles (the 17th century term for sequins), would have caught the light, adding to the beautiful detail of this jacket.

Woman’s waistcoat of bleached linen, embroidered with coloured silk threads, partially wrapped silver filé and silver-gilt filé, in chain, plaited braid and detached buttonhole stitches in a pattern of curving stems bearing flowers, with birds, caterpillars and butterflies. The waistcoat is lined with pale blue silk taffeta. It is front opening with long, curving 2-piece sleeves and the skirts are shaped with gores.

The waistcoat originally probably had a high round neckline, which was cut lower to wear as masque costume in the 1620s.

Elaborately embroidered waistcoats (so-called because they were fitted to the waist) were worn as part of informal dress by aristocratic women in the early 17th century, together with decorative petticoats and loose gowns. Waistcoats were also part of the 'masque costume' worn by women for amateur theatricals. The neckline of this waistcoat may have been altered later for this purpose; the fashionable genre of 'masque portraits' shows young women in low-cut waistcoats, draped in a decorative mantle, with their hair unbound. The design of roses, honeysuckle, columbine, carnations and lilies is typical of floral embroidery of this period, seen on similar waistcoats and illustrated in pattern books for embroiderers.

The clothing of aristocratic and royal women was decorated with embroidery. Female courtiers wore a linen jacket like this one when dressing informally. Lavishly embroidered with precious metal thread, it demonstrates the wealth of its wearer, and also celebrates the natural world. 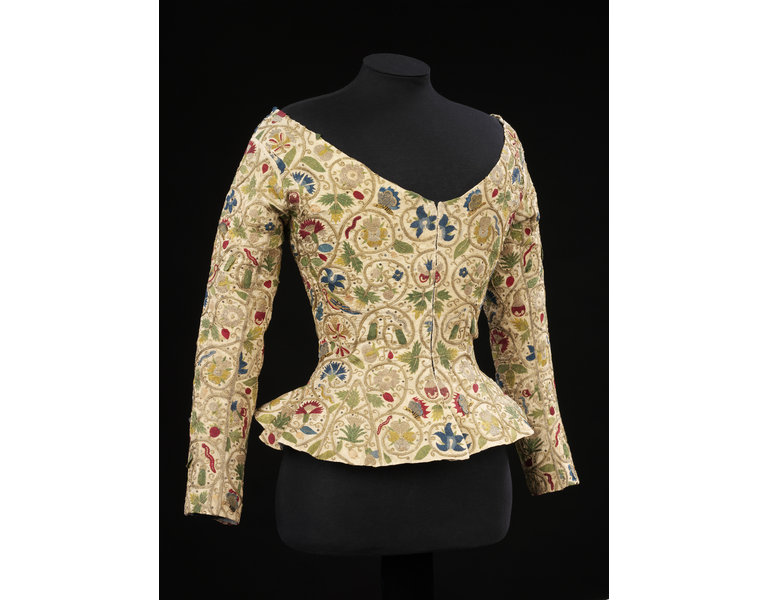