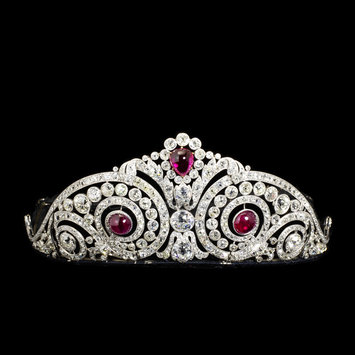 This diamond and synthetic ruby tiara was made in September 1913 by Cartier, Paris, for the marriage of Alexandra Comnène, an artist of Greek descent living in Italy, to Robert Everts, a Belgian diplomat. It was made largely from stones supplied by the bride. She first had the loose stones assessed in Naples, and then took them with her to Paris, where she stayed at the Hotel Régina and commissioned Cartier to make the tiara. On the invoice the tiara is described by Cartier as a 'bandeau', the cost of the mounting and the provision of a small number of extra diamonds charged at 4000 Francs. She wore the tiara at the civil wedding ceremony on 15 November 1913 in Brussels at the Mairie d'Ixelles. The insurance valuation of the tiara was 30,000 Francs.

The tiara is in the garland style, in which diamond-set scrolls and scrolling foliage played a large part. Inspiration came from ornament books of the 17th and 18th centuries which were re-published in the second half of the 19th century, and from the study of the architecture and ironwork of Paris and the palaces of Versailles and Fontainebleau. 'Louis Cartier constantly encouraged his draughtsmen to wander through Paris with their sketch-books and to note down details of seventeenth and eighteenth-century architecture' (Hans Nadelhoffer, Cartier Jewelers Extraordinary, London, 1984, p. 48).

'HL' with a leaf in lozenge
Mark of Henri Lavabre (the symbol in the mark is a four-leaf clover) struck proper left, near apex, close to the single diamond which is mounted on top of the principal scroll at a point almost vertically above the proper left synthetic ruby

Dog's head mark (struck twice close together)
French mark for platinum, instituted in 1912, struck proper left on wire frame, near apex, behind the frond of foliage which falls forward

The tiara was made by Cartier in Paris in September 1913 for the wedding of Alexandra Comnène. She was the daughter of Greek-born Angelia Calvocoressi (b. Constantinople 1840; d. Berlin 1929) and of her first husband Jean Michoglou. Alexandra was also the adopted daughter of Angelia's second husband, Waldemar Becker-Reuterskőld. Alexandra was married to Robert Everts (1875-1942), son of the Dutch Consul in Brussels, Philip Pelgrim Everts (b. Arnhem 1839; d. Brussels 1897). The tiara was worn at the civil wedding ceremony on 15 November 1913 in Brussels at the Mairie d’Ixelles. The tiara accompanied them in his diplomatic postings listed below, beginning with Peking.

Examination of the tiara confirms that the weight of diamonds remains approximately 67.50 carats (as specified in the Cartier invoice in 1913).

The tiara has a deep-green leather box stamped on the lid in gold with AC, for Alexandra Comnène, surmounted by a coronet, and on the base CARTIER (in gold) and MADE IN FRANCE, fitted internally and supplied with original twin-pronged screwdriver. The coronet refers to Alexandra's claim to descend from the Comnenus family, which had furnished emperors to Byzantium in the 11th and 12th centuries.

The tiara is documented by archival material recording the progress of the commission of the tiara, and the purchase of items for her trousseau, by Alexandra Comnène (1880-1961), during her visit to Paris with her mother in September 1913 when they stayed at the Hotel Régina. The documents include:

A note in Italian dated Naples, 16 July 1913, on the back of headed paper from the Hotel Sirene, Sorrento, lists diamonds and their weight in old carats and fractions. Besides these weights have been added by another hand the equivalent weights in metric carats, presumably by Cartier in Paris, since there is a note in French that one small brilliant is lacking. Metric carats became the international standard in 1907 at the Fourth General Conference on Weights and Measures.

Notification from Cartier, dated Paris, 10 September 1913, directed to Madame Alexandra Comnème [sic] and signed by Edmond Forêt, an eminent figure at Cartier for many years, stating that the list enclosed has details of the stones entrusted by her for remounting into the tiara (en Bandeau brilliants), and that the cost will be 4000 francs.

An accompanying list of stones received from ‘Madame Alexandra Comnème / Naples’ [sic] is on Cartier headed paper, titled Etat des Pierres, dated Paris, 10 September 1913. It is signed by Edmond Forêt. The list comprises the loose stones listed in the Naples note, with the addition of stones dismounted from a ring.

Lloyds of London insurance policies and related correspondence. At first insurance was arranged to provide cover in Europe for Alexandra Comnène’s three principal jewels at a cost of £10 10s. In view of her husband’s posting in China, this was later extended to provide worldwide cover for a further premium of £2 2s. The documentation shows that the tiara was valued in October 1913 at 30,000 francs.

The tiara is a rare recorded example of the use of synthetic rubies by Cartier before the First World War. According to the invoice, they are not listed among the stones supplied by Cartier, so it appears that Alexandra selected and bought them for herself. As noted above, amongst the bills of the Paris purchases was one addressed to her mother for a single cabochon ‘ruby’ from a firm of pearl and stone manufacturers, S. Worms. The stones in the tiara show the characteristics of the stones made by a process developed by Auguste Verneuil. Cartier later made greater use of synthetic rubies, as reflected in Nancy Cunard’s recollection of a brooch given to her mother in the early 1920s as ‘a large diamond brooch set in platinum with a reconstructed ruby in the centre’ (Hugh Ford, ed., Nancy Cunard: Brave Poet, Indomitable Rebel, Chilton Book Company, 1968, cited in Anne Chisholm, Nancy Cunard, Sidgwick & Jackson, 1979, p. 22).

Tiara of platinum and gold, set with brilliant- and rose-cut diamonds and cabochon-cut synthetic rubies, made by Henri Lavabre for Cartier, Paris, 1913 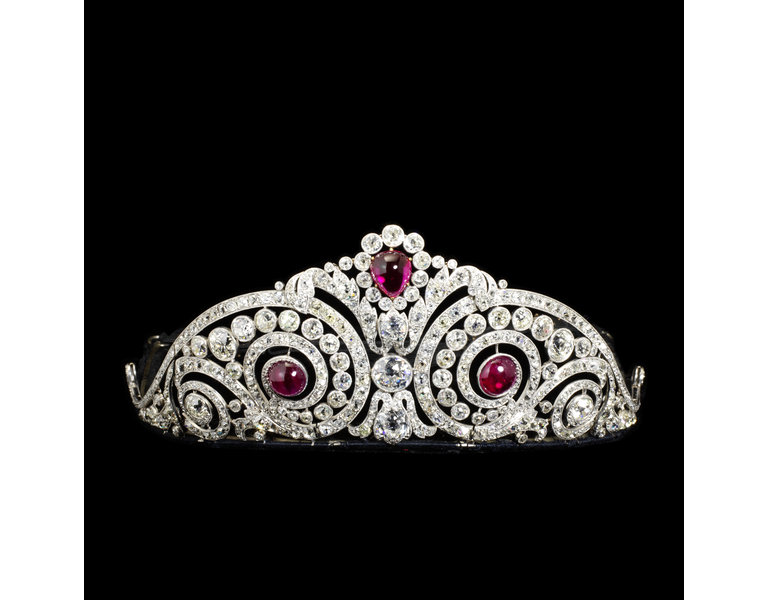