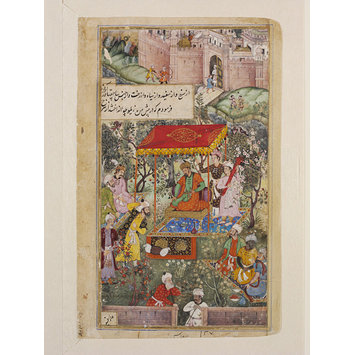 Babur (r. 1526-1531), a Central Asian prince descended from the great ruler Timur, was the founder of the Mughal empire. He wrote an account of his life in his first language, Chaghatay Turkish. By the time Akbar succeeded to the throne, few at court understood the language, and in 1589 the emperor ordered Babur's memoirs to be translated into Persian. Several illustrated copies were made for the emperor. In this page from a copy done in about 1590, an event of 1582 celebrating Babur's recent victory over Ibrahim Lodi is depicted. The new ruler is shown seated beneath a scarlet rectangular canopy, sitting on a low platform receiving Uzbek envoys in the garden full of flowers and blossoming trees. Behind him, at the top of the composition, are the red sandstone walls of a city, with figures being allowed entry through a wooden door in the gateway.The time taken to complete the painting, 50 days, is recorded in minute lettering at bottom left of the page. A contemporary inscription records the name of the artist, Ramdas.

Painting, opaque watercolour on paper, Baburnama illustration, by Ram Das, Babur receiving Uzbek and Rajput envoys in a garden at Agra. Babur, seated beneath a scarlet rectangular canopy, sits on a low takht receiving envoys in a garden full of flowers and blossoming trees. Behind him, at the top of the composition, are the red sandstone walls of a city, with figures being allowed entry through a wooden door in the gateway.

Ramdas
187
[Name of the artist]
[illustration number]
The time taken to complete the painting, 50 days, is recorded in minute lettering at bottom left of the page. 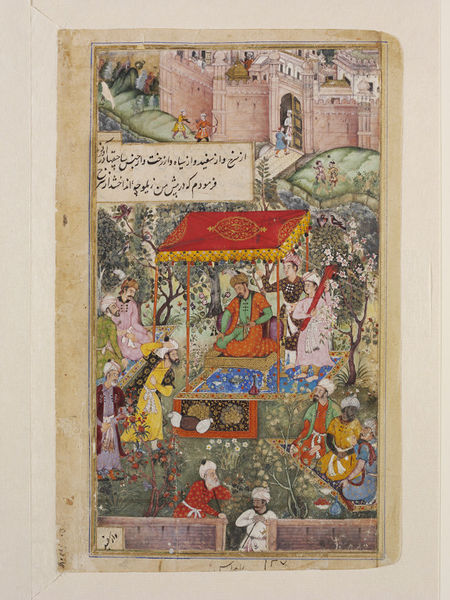