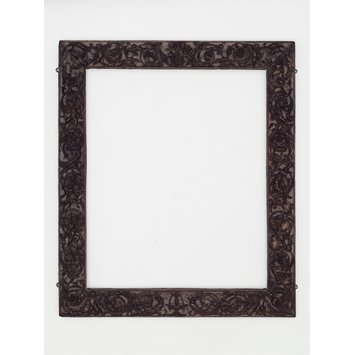 Although this frame has lost some of its original carving, it is still possible to appreciate the very high quality of carved detail: scrolling acanthus with vases and playing putti are interspersed with charming detail such as a snail, grasshopper, bird and leaping stag. The frame has previously been attributed to the Sienese carver and intarsia worker Antonio Barili (1453-1516) and his nephew Giovanni.

Walnut picture frame of mitred, originally glued construction, carved in the solid on its front face with scrolling acanthus, putti, animals, birds, insects and vase motifs. The four elements (two vertical stiles, a top rail and a bottom rail) are carved in solid walnut and joined at plain mitres. There are later reinforcements behind the corners, and evidence of old glue repairs. On the back are the remains of 2 pasted labels (no text).

The carving is in high relief, with deep undercutting on a plain background in which the blade marks of chisels and gouges are visible.

In the centre of the bottom is a fountain pouring two streams of water into a gadrooned bowl with lion masks, which is held between two winged (probably female) figures, each terminating in scrolled stems, which pass up the sides of the frame and meet in the centre of the top. The stems are enriched with acanthus leaves and flowers, amid which are ten amorini, a peacock and eight other birds, two grasshoppers, a lizard, two snakes, a snail, a dog, and two uncertain animals (possibly stags or horses) protruding from the middle of the centre rosette of each stile.

There is no sight edge rebate or back edge moulding; along the inner and outer edges rough saw cuts and exposed worm channels suggest that extra material has been removed: possibly a simple, moulded rebate inside, and on the outside a plain running moulding to create a small step. The amount of worm damage might have encouraged an earlier owner to have broken edges tidied up so as not to distract from the frame as an example of virtuoso carving. Several sawn through pegs are visible and a nails (where?).

At three(?) points of the surface of the ground of three sides of the frame a circular mark is visible, possibly a pressure bruise. The origin of these is unclear, but they might be the impress marks of a bench hook used to secure the wood for carving.

Bequeathed by Henry Vaughan, Cumberland Terrace, Regent's Park (a collector with particular interest in virtuoso carving, it would appear) (see p153 in 1900 register)

Text of document provided by Henry Vaughan (appended to registered file): ‘This carved frame is bequeathed by me to the Kensington Museum- and this description is intended to accompany the frame-

“This Carving is designed in a style that is wholly pure, and unmixed with the quasi-grotesque motives of German Renaissance art. Probably for modern uses the latter is perfectly suitable, but, to an eye trained by long contemplation of severe models, there is something surpassingly attractive in the thorough elegance and spirit of the former. This is a picture-frame, after (?) an Italian work, probably executed in Venice about 1500. With all the richness of this work the character of grace predominates. Grace is, in all decorative composition s, the supreme quality. The frame itself shows a “flat,” upon which is placed an infinite variety of lovely scrolls and foliage, in the knots and on the branches of which little boy-genii are sporting with that life-like vigour and spirit which distinguished the best days of Italian design. The angles of the frame are particularly worthy of attention, because that portion of such a design as this is the test of power in treatment. A scroll will, if dexterously managed, almost compose itself, after its elements are decided upon, and, with due care, variety enough may be imparted in minor parts, while the scroll of foliage proceeds onwards towards its end. At the angle, the difficulty occurs of happily uniting two lines which are perpendicular to each other. In the work now under consideration this difficulty has been triumphantly dealt with. The exquisite carving displayed in the small figures of lizards, peacocks and other birds, such as cocks and partridges, is surprisingly full of beauty and fancifulness. A very pretty point of design, which is thoroughly Italian in character, is observable in the middle of the lowest side of the frame. This is filled by a springing fountain; on each side of it an elegant grotesque demi-figure, whose tail runs into the foliage, presents itself. The crispness and clearness of the leafage, no less than its tender and pure elaboration, are beyond praise.”

The size and design of the frame suggests that it was intended to house a painted panel, probably a portrait or allegory.

Authorship
Henry Vaughan who gave this frame to the Museum believed that it was carved by Antonio Barili.
More recently Ferretti attributes this frame to his nephew Giovanni Barili who was documented as working with his uncle in August 1511, and later as part of Raphael's workshop. Frachetti considers it a late work by Antonio, but possibly showing a Roman influence received via Giovanni.

Antonio Barile's fame in his own day rested largely on his woodcarving, and several commissions for picture frames are recorded, 'abounding in hippogriffs, winged dragons, free-standing angels, eagles and birds, and grottesche of every kind.' Writing in 1786 Gugliemo della Valle thought that 'in carving in relief, in the perfection of design and the elegance of his foliage, scrolls, dentils, ovoli and other decorative motifs, whether studied from life or drawn from the imagination, Barili can serve as the pattern of excellence, and had no equal in the age of gold.' (Quoted by Thornton, p. 239). More recently, this frame has been described as 'one of the most significant chapters in ornamental renaissance sculpture' (uno dei capitoli certamente piu significantivi della scultura ornamentale rinascementale, condotta da Antonio al suo piu alto potenziale espressivo.' (Frachetti.p. 550-1).

Of Barili's other carved works, one of his most important commissions was in 1509-11 for Petrucci palace (Via Pellegrini) of Pandolfo Petrucci, the 'Tyrant' of Siena. He was to provide in the 'camera bella' the framework for eight frescoes by Signorelli, Pinturricchio and Genga (now between NG London and Siena Pinacoteca), and carved benches round the walls (now lost).

In comparison to two of the Siena pilasters by Barili (examined during their loan to the National Gallery, London 2009), the frame shows comparable naturalism and depth of carving on an irregular chiselled ground. (Generally the carving on the return sides of the pilasters is less ambitious than the fronts in composition and execution.) The style of faces and hairstyles are close, as are the style of birds (including their beaks and feathering), particularly the frequent pose with the head turned back across the body. Wing feathers are carved in a similar way, with 2 or 3 rows of feathers, before the wing tips. Both employ the motif of an animal leaping from a flower head (frontally on the pilasters, to one side on the frame). The pilasters make less use of the dense, full-petalled flower heads and employ a double flower. The tight spiral stems and whorls running under and over are seen on both frame and pilasters, and both employ the motif of a serpentine stem breaking away and terminating in a small flower. The spirals almost seem to be Barili's signature motif.

Overall the V&A frame is more finely detailed, and more lively (certainly more playful in spirit), although the comparison is not straightforward because the pilasters were a major commission (probably requiring the use of assistants) as part of a larger scheme in a formal setting; the frame likely to be a much smaller job, probably for a less public setting, and allowing the carver much more freedom. The composition, running continuously around the narrow members of the frame, encourages carving that is more tightly rhythmical (but with playful interruptions by insects and putti), so that it unfolds with bursts of controlled muscular energy, where the pilaster composition (by conception static and in equilibrium) is more stately. If the pilasters are considered Barili's late masterpiece, then the frame - presenting different challenges to the designer and carver - is no less skilful, perhaps more so, given the combination of freedom, control and exquisite detail.

Antonio Barili (1453-1516) is also known as a master of figurative intarsia. With his nephew Giovanni he dominated the field on account of his works in the Siena Duomo (1482-1504) and other churches of the region (eg Collegiata of San Quirico d'Orcia - where 7 intarsia panels and parts of the entablature from the Duomo were installed behind the altar in 1749). His 1502 intarsia self-portrait (from the Duomo, but destroyed during WWII) is inscribed in Italian 'This work, I, Antonio Barili, made with the knife, not the brush, in the year of our Lord 1502', demonstrating his pride in his technical skills.

Although the edges of the frame have decayed, the detail carved into solid walnut is still vivid. The carvings are about 1cm deep. Skilful undercutting animates the motifs with three-dimensional depth and vitality.

Antonio Barili and his nephew Giovanni are still celebrated today as two of the greatest woodcarvers of the Italian Renaissance. [01/12/2012] 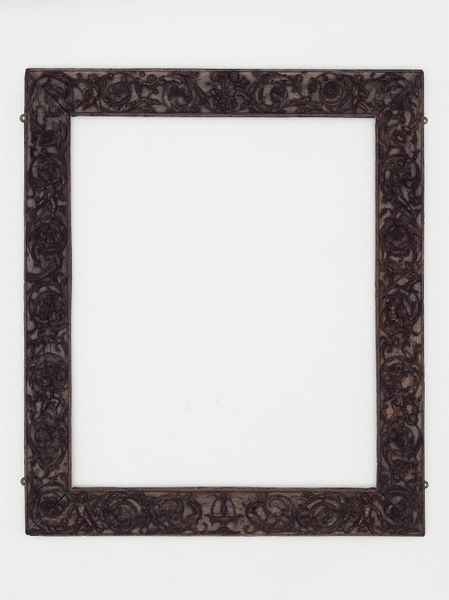