If you would like a larger file, or to use the image in other ways, contact our Licensing team.
BETA
+2
BETA

Bracelet
1974 (made)
On display at V&A South Kensington
Jewellery, Rooms 91, The William and Judith Bollinger Gallery
With the exception of the portrait miniature, the use of the human form in jewellery is seldom purely representational. In the 1970s aspects such as humour, eroticism and symbolism were also present.

The 'Warrior' bracelet was described in 2006, as follows: 'The woman whose head forms one terminal of the warrior bracelet has a stern, sad face. Perhaps she is an Amazon, perhaps a goddess of war." Jardine refuses to pin her down, but has written; "In her hands she holds a drop of blood. Is it her own blood or sacrificial ? I don't know, but it is the continuous cycle of life and death, war and peace.' Viewers must decide for themselves.

The 'Warrior' bracelet was acquired from her Degree Show at the Royal College of Art, London. She also studied at the Central School of Art and Design, London. After graduating, she returned to her home in Trinidad, becoming one of the island's first artist jewellers.

Jardine's jewellery is figurative and has a strong sculptural expression. She tends to use organic materials in combination with gold. Among the materials Jardine favours are ebony, recycled ivory, opals and moonstones, abalone and pearls. But the medium she has made completely hers is turtle-shell, used hundreds of years ago by West Indian craftsmen whose techniques are now lost, but which Jardine has reinvented.

Artist's statement:
'At the time of her making, I myself felt embattled. Perhaps she is the symbol of my own wished-for strength, bravery and serenity. The beetle carapaces are reminiscent of Samurai armour, but also, the iridescent green ones are part of my childhood memories growing up in isolated oil-field camps, surrounded by dense tropical forest.
Much of my work has a strong narrative and sculptural expression. Within a taut framework of innovative and traditional skills, precious metals and stones combine with natural materials which include sea urchins, calabash, iridescent beetles, mother-o'-pearl, ebony, recycled turtle shell and ivory. Resins, Perspex, pigments and foils add richness, colour and translucency to the overall 'alchemy' of each piece.' 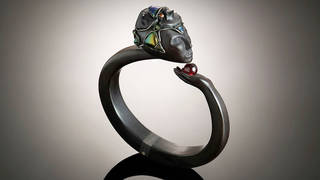 visit V&A trail: Britain and the Caribbean In this trail Avril Horsford, one of our African Heritage Gallery Guides, explores the traumatic history that connects Britain and the Caribbean, resulting from the lucrative and brutal trade in enslaved Africans, taken to work on sugar plantations in the 17th century. These objects reveal...
object details