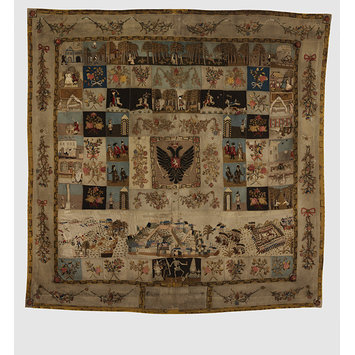 The panels of this patchwork and appliqué cover depict a variety of engaging imagery including military, symbolic, allegorical, commemorative and everyday scenes, alongside floral decorations. The design celebrates everyday activities and pleasures alongside scenes of military and cultural achievements.

The design includes an embroidered inscription stating that it was made in Prague, in 1790. Directly above the inscription is the vivid allegorical symbol of the skeleton, personifying Death. This serves to emphasize the fleetingness of earthly experiences and achievements, providing a symbolic reminder of the inevitability of death. Decorative and celebratory textiles such as this often had a moral element; another example here is the piece's only Biblical imagery, showing Adam and Eve in their state of innocence before the Fall.

The centre is dominated by a coat-of-arms featuring the Imperial eagle of the Holy Roman Empire, with the Czech lion in the middle, and most probably it refers to the beginning of reign of Josef II. (1790). Below the coat-of-arms is a panorama of a city under siege. This may represent a specific historical event, or be simply a generic military scene. This and other martial elements in the patchwork, placed alongside the men and women shown at their occupations and leisure pursuits, serve to emphasize the reassuring pattern of everyday life, and civilisation, that armies and wars were supposed to protect.

One of the contemporary events depicted is that of an early hot-air balloon flight, with a panel depicting two men watching a hot-air balloon floating along the horizon. Balloon flight was a scientific feat that caught popular imagination in the late 18th century and the public spectacles of flights were widely disseminated through printed material, numerous objects were produced decorated with featuring ballooning iconography. The first successful manned balloon flight took place on 21 November 1783, when Pilâtre de Rozier and the Marquis d'Arlandes took off at Versailles in a hot air balloon constructed by the Montgolfier brothers. This patchwork is an example of how the achievement of balloon flight was commemorated in domestically produced objects. The balloon is probably in commemoration of the first balloon flight in Prague, which was undertaken by the Frenchman Jean Pierre Blanchard, with Count von Sternberg as his passenger. However this flight is recorded as taking place on 31st October 1790, which is fifteen days after the creation date embriodered on the cover.

The maker of the quilt is unknown, but it may have been commissioned by someone from the higher ranks of society. It has been suggested that the use of French, rather than German, for the inscription could be simply due to the commissioner’s individual preference for French, perhaps influenced by the general European fashion for all things French during this period

A large square cover of inlaid patchwork and applique, mostly in wools, with panels depicting a variety of domestic, military, allegorical and commemorative scenes or containing floral decorations.

The quilt is made up of wool intarsia, wool and silk applique, with wool and silk embroidered details. It is supported on coarse linen and is fully lined. There are a variety of wool grounds present, mostly plain-weave with a raised nap, and some twill; some show evidence of having been pieced together in previous use. Spangles (sequins) have been used for the coat buttons of two gentlemen depicted in the upper portion of the design.

The whole cover has a wide border of floral garlands. In the centre of the lower edge of this border there is a panel with an inscription embroidered in black silk, which has largely disintegrated. Above this panel is a skeleton with a scythe and hourglass, symbolising Death, standing between two obelisks.

The centre of the cover is dominated by a framed depiction of the Imperial eagle of the Holy Roman Empire, bordered with panels of floral swags and garlands. The panels around this border all contain military imagery. Below the eagle, the lower third of the central design is a panorama depicting a small walled city under siege, with armed forces either side of it. To the left of the city there are small cannons positioned behind zig-zag barricades. Behind these is small number of military figures, with two figures wearing blue coats firing long firearms out of a group of trees. Four long firearms are positioned on the ground, alongside a stack of red military drums. Behind these are lines of pale-coloured tents, each with a coloured band running across the top ridge. To the right of the city there are four lines of cavalry followed by a group of foot-soldiers marching in a square military formation around a small number of flag-bearers, drummers and a man on horseback.

The upper-section of the central design is composed of a number of smaller square panels containing a variety of scenes, interspersed with floral decorations. The scenes run left-to-right from the top as follows:

* Chimneysweep with brush on shoulder, outside a house
* Two men watching the ascent of a hot-air balloon
* Lady sitting in a forest (possibly with a bird in a cage)
* Adam and Eve by a tree
* Man with a firearm hunting deer in a forest
* Gardener by a tree
* Watermill
* Upper class couple standing in an ornamental garden
* Lower class couple standing outside a timber-framed building
* Woman dressing by a bed
* Two men on horseback facing each other, holding swords aloft
* Two soldiers, each with cannon, in woods
* Man on horseback facing another man who is falling off his horse (having presumably been shot in a gun fight)
* Man wearing pale-coloured, loose garments standing by a bed
* Astronomer sitting by a large globe, looking through a telescope into a starry night sky
* Two sentries by sentry boxes
* Male musician playing a piano
* Builders constructing a house, with a man who appears to be an architect
* Two groups of three men in military uniforms standing in a row holding swords
* Man with a stick standing outside a building with an easel (a surveyor?)
* Sculptor working a block of stone in a decorative interior
* Two soldiers in dark garments holding shields, the larger of which has A.C. embroidered on it
* A repetition of the previous scene but with M.C. embroidered on the larger shield
* Painter working on a portrait of a man in military dress, sitting by a wall decorated with a silhouette
* Man standing next to a freestanding stone pillar (a stone mason?)
* Two sentries by sentry boxes
* Two men standing in an avenue of trees fighting a duel with swords

Wool with some silk, inlaid, applique, and embroidered with raised work

A.C
Embroidered onto a shield held by one of the soldiers depicted.

Given by Louis C G Clarke, of Berkeley House, Hay Hill, London. According to the acquisition papers the donor said it had been stripped off a screen.

This was presumably Louis Colville Gray Clarke (1881-1960), art conoisseur and Director of the Fitzwilliam Museum, Cambridge, from 1937 to 1946. He travelled extensively, and made particularly connections in Hungary, renewing "in the 1920s friendships made in his youth with members of the senior Austro-Hungarian families, when he took part in digs at Toszey and elsewhere in Hungary". (ODNB) He may have acquired the textile on his travels in East Europe.

This patchwork cover was made at home or in a tailor’s workshop. A variety of scenes celebrate military and cultural achievements, as well as everyday activities. The square second from the left on the top row shows a simplified balloon. This may refer to the first balloon flight in Prague, undertaken by French balloonist Jean-Pierre Blanchard, although curiously Blanchard’s flight is recorded as taking place after the date embroidered on the cover.

Bohemia, now Czech Republic (Prague)
Wool patchwork, appliqué in wool and silk and embroidered
Embroidered in French ‘This piece was made in Prague 16 October 1790’
Given by Louis C.G. Clarke

This cover has lots of exciting scenes. Can you find a hot-air balloon taking off, soldiers hiding in the woods, a man falling off his horse and someone painting?

Another example (in the V&A's collections) of balloon flight being commemorated in domestically produced objects is a sampler embroidered in coloured silks in England in 1786 V&A: Circ.45-1922 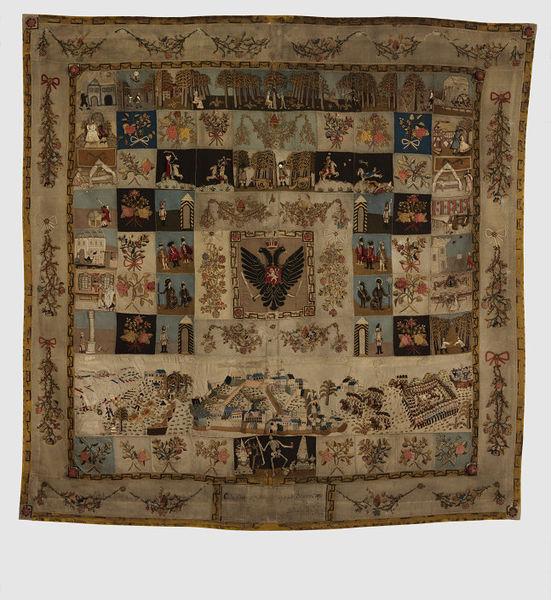