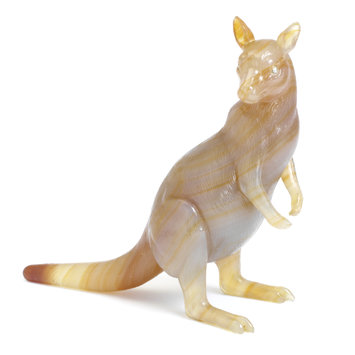 Carl Fabergé used many types of hardstone to make lively and humorous depictions of animals for an aristocratic clientele. Queen Alexandra assembled a celebrated collection and her husband King Edward VII commissioned Fabergé to produce models of the favourite animals at Sandringham. Fabergé's London branch sold about 250 models of animals between 1907 and 1917.

Banded honey-coloured agate with rose-cut diamond eyes.
Square varnished wooden case of honey colour. The top edge of the lid has a curved profile. The base has a bevilled edge. The lid is lined inside with white silk printed with the double-headed eagle of the Imperial Warrant above Faberge, St Petersburg, Moscow, London in gold. The base has a fitted recess for the kangaroo in cream- coloured velvet of fresh appearance.

Captioned as being 'In the Royal Collection at Sandringham' in A. Kenneth Snowman, The Art of Carl Fabergé (3rd. edn., London, 1964, plate 272)
Kenneth and Sallie Snowman Collection
Exhibited and published: Fabergé Hofjuwelier der Zaren, Munich, 1986-7, no. 318
On loan to the V&A from 2003 until its Cultural Gift by Nicholas Snowman, 2017

This is one of twelve objects presented from the Kenneth and Sallie Snowman Collection by their son, Nicholas. Eleven were given in 2017 under the Cultural Gifts Scheme administered by HM Government. The twelfth, a ring with a cameo of Elizabeth I, was given through the Art Fund in 2016.

Kenneth Snowman (1919-2002) was described on his death by Terence Mullaly as ‘one of the last leading representatives of the London art market’s golden age’. His father, Emanuel Snowman, married the daughter of Morris Wartski, a pedlar in North Wales whose talents made him the owner of a Rolls-Royce with shops in Bangor and Mostyn Street, Llandudno, the ‘golden half- mile’ which was said to boast more royal warrants than anywhere outside London. In 1927 Emanuel made his first purchases of works of art sold by the Soviet Government, the foundation of Wartski’s pre-eminence as an international dealer in Fabergé. Kenneth remembered seeing them laid out on the mantelpiece and bookshelves of the morning room of their house in Hampstead. Aiming at first to be an artist, Kenneth studied at the Byam Shaw School of Art, and earned a fee in 1939 through his illustrations, drawn more from Gray’s Anatomy than from life, for the best-selling Technique of Sex written by Elliot Philipp under the pseudonym of Anthony Havil. He exhibited at the Royal Academy and the Paris Salon, but a bazaar at which Sallie Moghi-Levkine (1919-95) presided over the tombola had introduced him to the love of his life and in due course the need to find a more reliable income. He joined the family firm and, making full use of Sallie’s Russian, brought to Fabergé scholarship a new energy and authority.

In an interval at the Royal Opera House on 7 January 1976 he sketched out for Sir Roy Strong a plan for the Fabergé exhibition he curated at the V&A to celebrate the Silver Jubilee, a legendary success which had 150,000 visitors queuing down the Brompton Road, brought the hot-dog sellers over from the Science Museum, and inspired exhibitions across Europe and North America. Wartski became famous for its scholarship, exhibitions and books. Kenneth Snowman’s eminence as an authority on Fabergé carried him into a short story by Ian Fleming, The Property of a Lady, later incorporated in the plot of the film Octopussy. James Bond ‘looked Mr Snowman straight in the eyes’ and said “Will you give me a hand?”.

Kenneth Snowman wrote with even greater affection and no less authority on gold boxes. Eighteenth-Century Gold Boxes of Europe, first published in 1966, was revised in 1990. One of the great influences on Fabergé’s work was Johann Christian Neuber (1736- 1808), court goldsmith at Dresden, and two examples of his work are included in Nicholas Snowman’s gift. 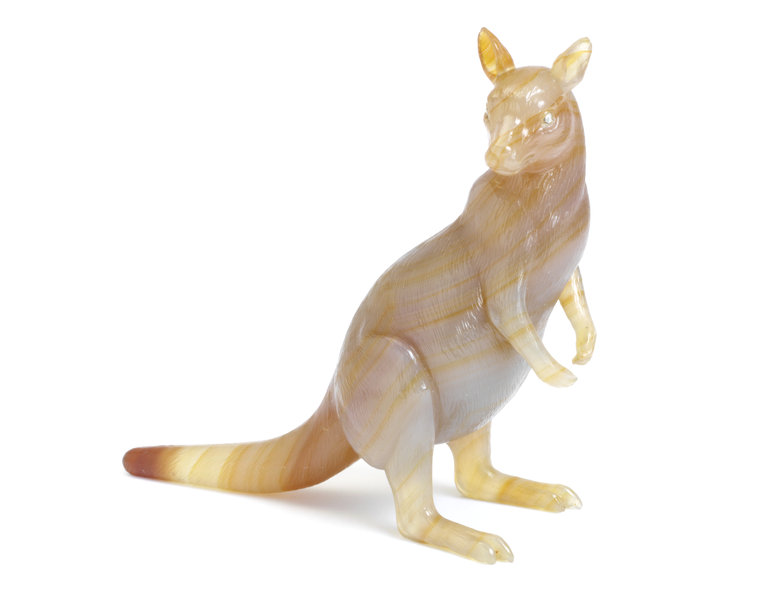