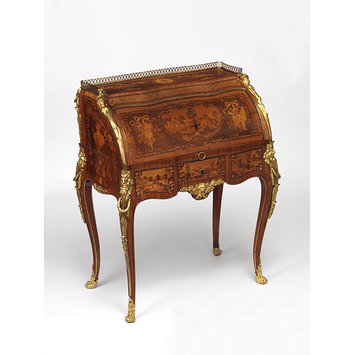 This combined writing desk and dressing table (secretaire-toilette) exemplifies the skill and achievements of Parisian cabinet makers working in the period of Louis XV and Louis XVI. It is distinguished by its elegant proportions, graceful curves and for its intricate inlaid decoration and ormolu mounts.

Dual function writing desks and dressing tables were popular items of furniture among ladies of fashion who had to maintain the polite custom of writing letters as well as spending much time at their toilette preparing for an endless series of entertainments and social appearances. Such furniture nearly always incorporated drawers or interior compartments that could be secured by a lock, thus rendering it suitable for storing personal effects and, especially, private correspondence. This desk typically contains a number of drawers and compartments for storing writing materials and articles of the toilette, including an ink well, brushes perfume bottle, pomade pot and a tongue scraper.

The decorative scheme on this example, which incorporates landscapes, trophies of musical instruments and classical motifs such as a bust of a man, urns and festoons, would have appealed to educated ladies of the elite classes. It is thought that this desk may have belonged to Marie Antoinette, although there is no foundation for this claim.

The secrétaire is in the form of a bureau with a cylinder front and on a stand with four cabriole legs. In the upper part is a sliding shelf which, when pulled out, raises the cylinder front and dislcoses the a cbinet of five drawers; one of which is fitted with writing materials. The stand contains a deep drawer which is divided into three compartments with lids. The central compartment has a mirror set in the inner surface of the lid, while the side compartments are filled with brushes, powder pots (of Mennecy porcelain) flasks, and other objects of the late eighteenth-century toilette.

The whole surface is decorated inside and outside in marquetry comprising tulipwood, harewood, boxwood and other woods. Ormolu mounts consist of masks, festoons, branches of oak and an open gallery around three sides of the top of the desk.

oak veneered with stained sycamore and and tulipwood, decorated with marquetry of harewood, tulipwood, holly, purplewood, ebony, hornbeam, pearwood and boxwood in parts stained and inked, mounted with ormulu and gilt bronze. Drawers are of walnut, inner boxes are walnut and sycamore. Includes leather, glass and porcelain containers

Traditionally stated, but without foundation, to have belonged to Marie Anoinette.

A copy of this desk by Paul Charles Sormani (b. 1848), Paris, was shown at the Exposition Universelle in Paris in 1900. A version was sold to the Vanderbilt Mansion (Hyde Park) and remains in the collection of the Vanderbilt family at Château-sur-Mer, Newport. See Camille Mestdagh, L'Ameublement d'Art Français 1850-1900. Paris, Editions de l'Amateur, 2010, fig. 218.

A lady's writing desk and dressing table (secrétaire-toilette), decorated in marquetry of tulipwood, harewood, boxwood and other woods, and mounted in ormolu.

Sargentson, Carolyn, 'Looking at Furniture Inside Out: Strategies of Secrecy and Security in Eighteenth-Century French Furniture', in Furnishing the Eighteenth Century. What Furniture Can Tell Us about the European and American Past, ed. Dena Goodman and Kathryn Norberg. New York and London: Routledge, 2007 (ISBN 10:0-415-94953-X), pp. 205-236, this piece discussed on pp. 223-225.

Veneered with marquetry of various woods; gilt-bronze mounts. The dressing-drawer has a central mirror flanked by compartments with hinged tops. When the cylinder top is pushed up, the writing and dressing slide comes forward.

The trophies on the cylinder top are almost identical to some engraved by J. C. Delafosse and published in 1776-7. The desk, with its serpentine Rococo form, can hardly have been made much later than this. A table with many similar features exists; it bears the stamp of A.L. Gilbert, a cabinet-maker who became a master in 1774. It has been suggested that a craftsman named Christophe Wolff executed the intricate marquetry decoration. 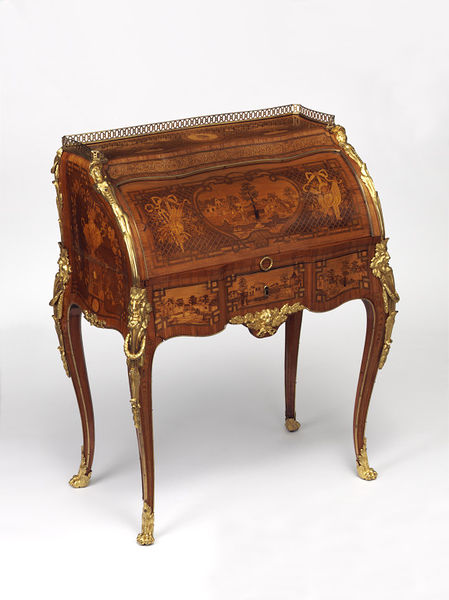