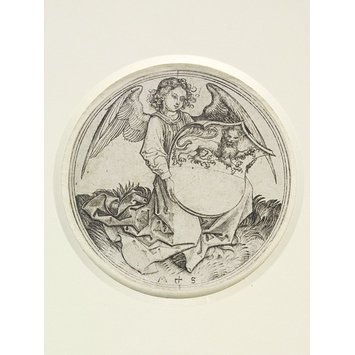 Shield with a lion held by an angel

Martin Schongauer, son of a goldsmith, was among the first European artists to explore the full expressive potential of printmaking. Schongauer's novel use of the technique of engraving, developed from the goldsmith's long-established practice of decorating metal with engraved patterns, was recognized almost immediately and his prints were highly esteemed in his own lifetime.

This is one of a series of ten engravings depicting either a single or a pair of shields held by a single supporting figure. The set includes shields held by an angel, a Moor, a peasant, a wild man and woman, and two women. It is not known why these engravings were made but they are thought to have been most likely used as models for goldsmiths, miniaturists and other craftsmen to take elements from and adjust according to their needs. Schongauer's coats of arms cannot be linked with any particular commissions, however there must have been a considerable demand for sample heraldry of this sort among goldsmiths, manuscript illuminators and simply among newly-rich families wanting to enhance their status.The heraldic imagery on the shields represent between them standard heraldic devices, such as stars, lions, swans and cockerels.

Printing engravings on paper as opposed to engraving the surface of metal objects for decorative effect, evolved in Germany in the workshops of goldsmiths. Schongauer himself trained as a goldsmith.Early prints were patterns for decorations on art objects and examples were collected by craftsmen, just as they compiled ‘model books’ of drawn copies. Print was relatively affordable and became a way in which designs spread through craftsmen’s workshops across Europe and beyond.

A kneeling angel with spread wings, turned to the right, holds a horizontally divided shield, depicting a lion rampant on its upper half. The print has a triple circular border.

M + S
The monogram of Martin Schongauer is at the bottom of the print in the centre. The monogram consists of Schongauer's initials and a goldsmith-like hallmark composed of a small cross plus the crescent from his family's coat of arms. This signature occurs in two forms: a few plates, apparently all done in the early 1470s, have an M with vertical sides; the majority, as here, have an M with slanting sides. (The Illustrated Bartsch, Vol.8 Part 1, pg. 1)

Part of a group of objects previously in possession of Mr. R.S.Smith [South Kensington Museum employee?].

'The use of coats of arms and personal devices had originated in the earliest days of knighthood as a way to identify men entirely encased in armour, and the devices chosen had personal assocations with deeds of valor in battle; these were the people who became the landed nobility in the course of time and their coats of arms were both officially recognized and inheritable. By the fifteenth century, however, the rise of urban life and an economy based on money rather than land had created a growing middle class whose prestige had been won in the world of commerce and civic activity rather than on the battlefield. Such people received permission from Kaiser Friedrich III - ever short of cash - to purchase coats of arms for themselves. These were valid only during the lifetime of the original grantee and, since they could not be inherited by his descendants, are usually impossible to identify today.

Paper coats of arms are thought to have been used as ex libris plates, as name plates and calling cards. By the sixteenth century, and very possibly as early as Schongauer's day, a student from a wealthy family might use such a print as an inset in a friend's 'album amicorum'. Each guild, city, university and bishopric had its own emblem, as did places of business such as inns, and even larger private homes, where they served in lieu of house numbers.

An Angel kneeling with out-spread wings, displaying a shield with a lion in chief; engraving by Martin Schongauer (ca 1450-1491) 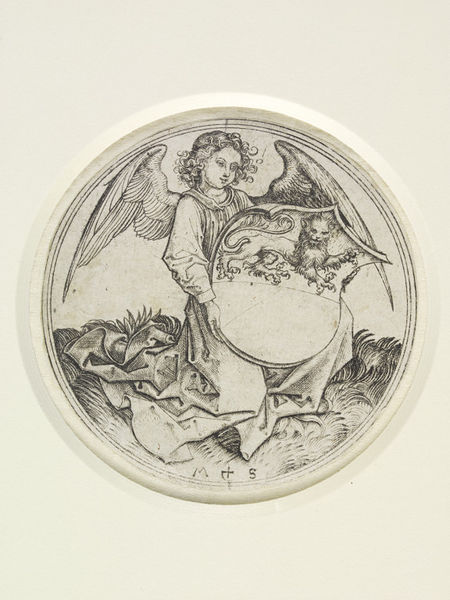