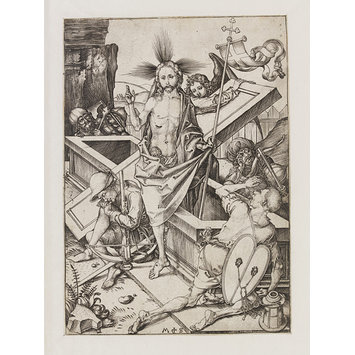 Martin Schongauer was a painter working around Colmar, Germany, making wall-paintings and altarpieces to commission. His training as a goldsmith probably influenced his decision to try engraving. Schongauer’s Passion series features twelve engravings showing the events of Christ’s Passion from the Agony in the Garden through to the Resurrection. Several scenes from the series, including this one, are depicted on a reliquary made in Constance, Switzerland, around 1490-1500 (V&A Museum No. 357-1854).

Schongauer’s engravings were much admired and his influence extended across Germany, France, the Netherlands, Italy and Spain. Painters and other engravers copied his work and used them as designs and compositional models for artworks in other media – book illustrations, enamels, tapestries, ivory, wood and metalwork.

Like his predecessors, Schongauer added his monogram to his engravings. This reflects the origins of engraving among goldsmiths. As a painter Schongauer approached the technique differently from other engravers, using light and shadow to model his figures and make his images more readable. Here he casts some of the background figures into shadow so that the foreground figures are highlighted against them.

Christ, with a large cross-shaped halo of rays, is rising from a sarcophagus with the victory banner in his left hand. An angel behind him on the right side is sliding the cover away. To the left a beardless guard with sword and crossbow is slumbering while to the right, behind the coffin, are a turbaned archer and a third soldier with helmet and flail.

M + S
The monogram of Martin Schongauer appears at the bottom of the print in the centre. The monogram consists of Schongauer's initials and a goldsmith-like hallmark composed of a small cross plus the crescent from his family's coat of arms. This signature occurs in two forms: a few plates, apparently all done in the early 1470s, have an M with vertical sides; the majority have an M with slanting sides. (The Illustrated Bartsch, Vol.8 Part 1, pg. 1)

Head in profile with staff and star
Watermark

The print is signed on the back in pencil, Emil Schröter. Schröter was a print collector. He died circa 1912. His collection was sold at an auction held in Stuttgart from the 7th to 11th May 1912. The sale comprised prints by old master and modern printmakers and modern designs and watercolours and was combined with the collections of P. von Baldinger and Fr. Rumpf.

As Master E.S. had done before him, and as Albrecht Durer would do later inspired by many of his compositions, Schongauer made a series of engravings of matching size detailing the events of Christ's Passion. Such cycles were as yet uncommon in the graphic arts, but were familiar from the illustrations for the canonical Hours of the Cross that appeared in illuminated manuscripts of the earlier fifteenth century. There are twelve plates in Schongauer's series which was widely copied across Europe, from France and the Netherlands to Poland and Hungary, in every graphic medium, as well as in painting and sculpture. (from The Illustrated Bartsch: 8 Commentary, Part 1, pg.74).

The series of the 'Passion of Christ' consisting of twelve sequential scenes is the largest set of engravings made by Martin Schongauer. It represents the continuation, on his part, of a traditional subject-cycle for fifteenth century engravers. Almost all of his predecessors had produced series illustrating the Passion of Christ. Schongauer's version is not only filled with agitation, drama and agony characteristic of German art in the fifteenth century, but he has also invested the scenes with a new and vital humanity. (from 'Martin Schongauer: The Complete Engravings' by Max Lehrs; pg 27)

The Resurrection by Martin Schongauer; engraving; 1479-80 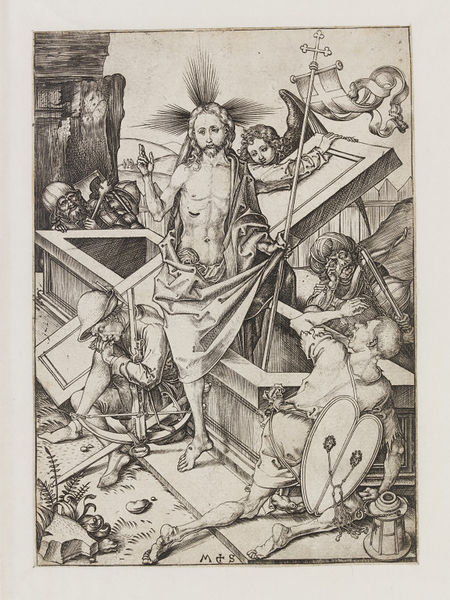