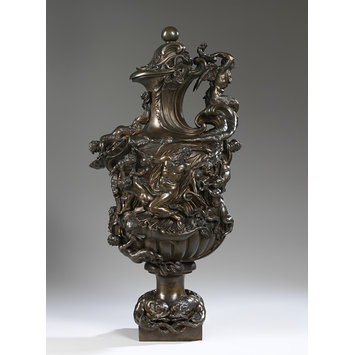 Ewer depicting the Triumph of Neptune

This is one of a pair of highly ornamented and purely ornamental ewers made for Senator Giovanni Battista Scarlatti by Massimiliano Soldani, re Soldani's post in Medici court, the most renowned worker in bronze in Florence in the late baroque period. On one side of this massive monumental ewer the sea-god Neptune is depicted, surrounded by tritons blowing on conches, and others fighting. On the other side a bearded triton rides a sea horse, also amidst tritons. A bare-breasted winged female figure forms the handle. Shell-like forms further enliven the surface, and four dolphins coil themselves around the base. Hugh Honour noted that Sir Horace Mann (1701-86), the British consul in Florence, was negotiating for the purchase of some Soldani bronzes for George Bubb Doddington in 1759, and suggested that these could be the ones currently in the Victoria and Albert Museum.

Charles Avery has recently discovered references to the ewers in Soldani's correspondence, some of which is in the Bodleian Library, Oxford. In 1722 Soldani evidently offered to cast further bronze versions for Senator Scarlatti, and in 1732 made the same suggestion to an Italian merchant resident in London, Giovanni Giacomo Zamboni (1683-1753). However it seems unlikely these were ever made (I am grateful to Charles Avery for this information).

The ewers were cast from wax models, and the moulds used in this process were later employed to create ceramic examples in coloured Doccia porcelain. Examples of these Doccia porcelain versions are now in the Museo Civico, Turin.

On one side of this massive monumental ewer the sea-god Neptune is depicted, surrounded by tritons blowing on conches, and others fighting. On the other side a bearded triton rides a sea horse, also amidst tritons. A bare-breasted winged female figure forms the handle. Shell-like forms further enliven the surface, and four dolphins coil themselves around the base.

Commissioned by the Florentine Senator Pietro Neri Scarlatti (1658-1723), Florence; then Giovanni Battista Scarlatti, Florence; possibly in the collection in England of Baron George Bubb Dodington Melcombe (1691-1762); purchased by the V&A from Rosenborg and Stiebel Inc., New York, with its pendant (A.18-1959) for $4,500, 1959.

In 1741, Giovanni Battista Scarlatti presented the ewers to the members of the Accademia della Colombaria while, in 1759, Horace Mann tried to buy the bronze from the Scarlatti family for Bubb Dodington.

A profusion of marine ornament and figures takes over the form of these monumental ewers. Shells, waves, dolphins, mermaids and mermen accompany classical sea gods. Neptune and Triton feature on one ewer, Amphitrite and a sea nymph on the other. Soldani manipulated the fluidity of bronze with virtuoso skill to create a sinuous composition in which there is no clear distinction between form and ornament. [December 2015]
EWER
Italian (Florence); probably about 1695
Bronze
By Massimiliano Soldani (1656-1740)

The figures depict Neptune riding a dolphins and Triton riding a sea horse. This ewer and its pair, shown nearby, are purely decorative; they were later reproduced in coloured porcelain by the Doccia factory in Florence. They may once have belonged to the Scarlatti family in Florence, from whom the British Consul, Sir Horace Mann, attempted to acquire a pair of similar description for Bubb Doddington in 1759. Massimiliano Soldani received his training as a sculptor and medallist in Rome and Paris before being recalled to Florence where he worked as the master of Coins and Custodian of the Mint for the Medici Grand-Dukes of Tuscany.
[1993 - 2011] 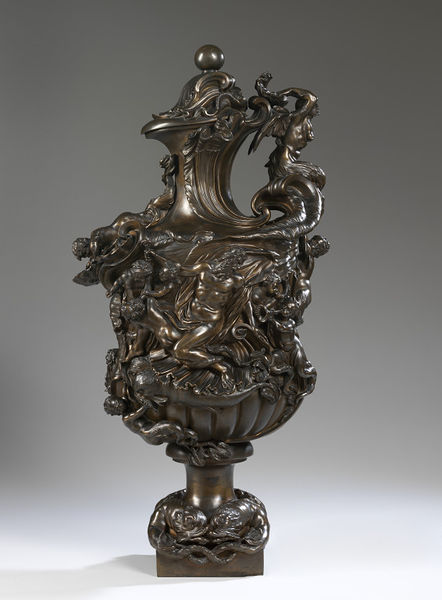