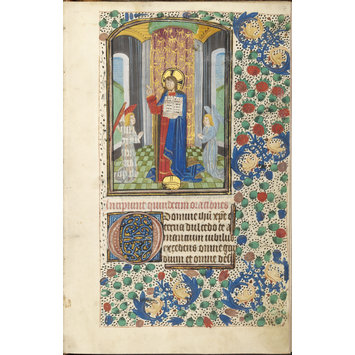 Book of Hours, Use of Sarum (the 'Zouche Hours'), in Latin

Textual content:
ff.1r-6v: Calendar, half full. Major feasts in red. The Translation and feast of Thomas Becket (7th July, 29th December) have been erased, as have all Pope's feasts.
ff.7r-13v: Fifteen O's of St Bridget.
ff.14r-25r: Suffrages.
ff.25v-67v: Hours of the Virgin Mary, Use of Sarum; after Lauds are suffrages, including a suffrage to Thomas Becket which has been lightly struck out (f.43r). The suffrages are followed by the Hours of the Cross and the Hours of the Holy Spirit.
ff.67v-72r: Sequence of 29 prayers to the Virgin, followed by a prayer 'Oratio'.
ff.72v-77r: Prayers to the Virgin.
ff.77v-80v: Seven Earthly Joys of the Virgin.
ff.80v-84v: Prayers to Christ's image, cross and wounds, with appended prayers to the Virgin and St John the Evangelist.
ff.85r-88v: Sequence of prayers.
ff.89v-90r: Suffrage to John the Evangelist added slightly later, possibly in the early 16th century, on ruled sheets originally left bare.
ff.91r-107v: Seven Penitential Psalms, with Fifteen Gradual Psalms and Litany, with petitions interspersed, followed by seven collects. References to the Pope and abbots in petitions have been carefully erased (f.104v).
ff.108.r -130r: Office of the Dead, Use of Sarum.
ff.130v-142v: Commendation of Souls, consisting of Psalms 118 and 138, followed by prayers.
ff.143r-148r: Psalms of the Passion.
ff.148r-149r: Introduction to St Jerome's Psalter, with Rubric, followed by a prayer and an antiphon.
ff.149v-161r: St Jerome's Psalms.

Decoration:
17 half page miniatures depicting the standing figure of Christ (f.7r), the Annunciation (f.25v), the Visitation (f.33r), the Nativity (f.48r), Annunciation with the shepherds (f.52r), Adoration of the Magi (f.55r), Presentation in the Temple (f.57v), Massacre of the Innocents (f.60v), Flight to Egypt (f.63r), Virgin and Child, enthroned (f.68r), Pietà (f.72v), Presentation of the Virgin at the Temple (f.77v), David in penitence (f.91r), Raising of Lazarus (f.108r), Raising of a soul (f.130v), Christ as Man of Sorrows (f.143r), and Jerome seated at a desk, with his lion (f.149v).
All miniatures are within round topped frames comprised of a thin fillet of brushed gold and white on a red ground.
Historiated initials and small miniatures are integrated in the text throughout the Suffrages, Hours of the Cross, Hours of the Holy Spirit, prayers to Christ's attributes and Christ's Seven Last Words. These miniatures and initials reflect the content of the text.
The manuscript also comprises of letter shape initials and floral illuminated borders composed of coloured acanthus leaves, flowers, and black dots.

Binding:
18th century, England. Plain calf boards, with gold-tooled fillet around edge of covers. The edge of the boards has been tooled in blind with patterned roll. The manuscript has been tightly sewn on five hemp cords, headbands are not sewn in. Gold-tooled fillet above and below each cord on the spine, also top and bottom. Simple gilt lettering "EHN" on the spine.

Flanders (made)
Bruges (made)

(1) Presumably in England by the 1530s or later, since references to Thomas Becket (aside from the Suffrage on ff.19r-20r) have been struck out, and references to the Pope and abbots have been erased.
(2) Owned by the Zouche family of Harringworth, Northamptonshire, in the 16th century. On f.161v, the Zouche family arms are visible under ultraviolet light, with note "Margret Zowche is a gude woman" in late medieval hand above them. The note may refer to Margaret, second wife of Richard la Zouche, 9th Baron (c. 1510-1552), or Margaret, the wife of the 10th Baron, known to have Protestant sympathies.
(3) Collection of William Carr (1863-1925); among a number of his manuscripts sold in London, Sotheby’s, 7th December 1982, lot 81.
(4) Bought by the National Art Library from Thomas J Symonds in 1984.

pp.26, 66
Watson, R. Illuminated manuscripts and their makers. An account based on the collection of the Victoria & Albert Museum. London, 2003.
vol.1, pp. 422-427
Watson, R. Western Illuminated Manuscripts.Victoria and Albert Museum. A catalogue of works in the National Art Library from the eleventh to the early twentieth century, with a complete account of the George Reid Collection. London, 2011. 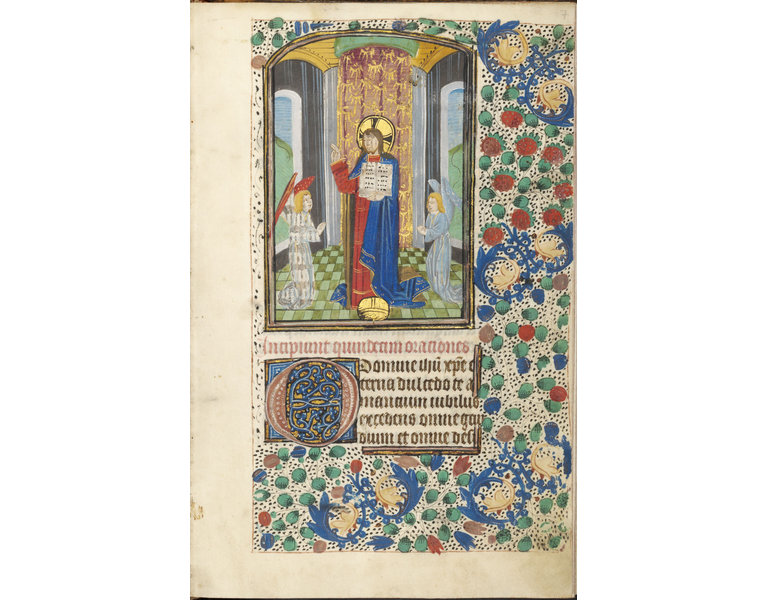