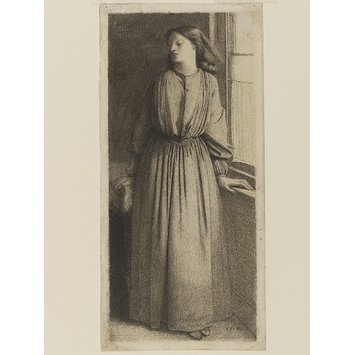 Elizabeth Siddal (1834-1862) was introduced to the Pre-Raphaelite circle of artists (of which Rossetti was a leading member) by Walter Deverell, probably in late 1849. Deverell had found her working in a milliner's shop in Leicester Square, London, and she posed for his painting Twelfth Night (exhibited 1850). By the winter of 1851-1852 she had ceased to model for anyone except Rossetti, and it is thought they became engaged at around this time, though they did not marry until 1860. Her health was fragile--she suffered from tuberculosis and was often ill. Rossetti made drawings of her in the course of their daily life (she was not only his model, formally and informally, but also, from 1852, his pupil). This is a study made during a stay in Hastings, on the south coast, where Rossetti had taken her to recuperate from her latest bout of ill-health.

Lizzie Siddal was a dressmaker who came to the attention of the Pre-Raphaelites - how remains uncertain - around the end of 1849. She modelled for several of their paintings, her luminously red hair inspiring in them a new and rather strange ideal of beauty. Later accounts tell of Rossetti's immediate attraction and devotion to her, but this does not seem to have been true. She became his pupil by the end of 1852, and by the middle of 1854 - the date of this portrait drawing - their relationship was established, though clouded by her illness. Rossetti took her to the south coast resort of Hastings to recuperate from her tuberculosis. They eventually married in 1860, but she died in tragic circumstances nearly two years later. This drawing reflects Rossetti's feelings for Lizzie at the height of his devotion; he drew her over and over again, recording her every physical move and expression, almost - as it were - making love to her by means of his pen or pencil. Perhaps no one could maintain the intensity of his feelings, particularly such a mercurial personality as Rossetti, and, although he was deeply affected for some years after Lizzie's death, he later found inspiration for his art in other women (see cat.no. 128)

Dante Gabriel Rossetti made many sensitive drawings of his muse, later his wife, Elizabeth Siddal, of which this is one. These were not intended for display – his friend Ford Madox Brown recalled Rossetti showing him ‘a drawer full’ of such portraits, and remarked, ‘It is like a monomania with him.’

Pen and ink drawing of Elizabeth Siddal by D.G. Rossetti, 1854 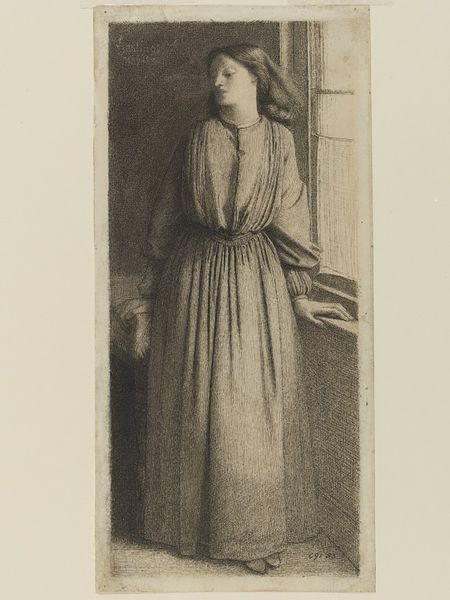