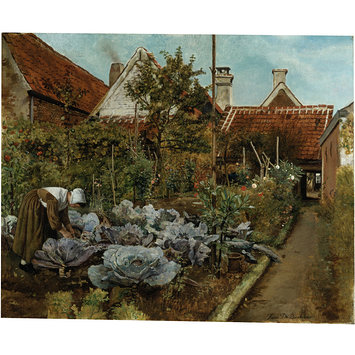 Henri de Braekeleer (1840-1888) was the son of the painter Ferdinand de Braekeleer and the nephew of the more famous artist Henri Leys with whom he would share several commissions. He trained with both his father and uncle and also studied at the Antwerp Academy. After his uncle's death in 1869, he began to find his own direction and the following years were the most productive of his career. He stopped painting due a mental illness between 1879 and 1881, turning afterwards into an almost Impressionist manner, particularly admired by Van Gogh. He died shortly after in misery.

This painting is a typical example of Henri De Braekeleer's relatively large output of genre paintings. He favoured humble subjects matter such as the present one that he depicted with great realism in a restricted albeit bright palette. His paintings are part of the Belgian school that developed a new realism in genre paintings and landscapes, announcing somehow the new development of The Hague school.

In a garden with flowers and fruit trees, a young woman bends over a row of cabbages; in the background are houses with brick-red roofs.

Ref: Basil S. Long, Catalogue of the Constantine Alexander Ionides collection.Vol. 1, Paintings in oil, tempera and water-colour, together with certain of the drawings, London : Printed under the authority of the Board of Education, 1925.
C. Monkhouse, ‘The Constantine Ionides Collection’ in Magazine of Art, vii, 1884, pp. 36-44, 208-214.

Historical significance: This painting is a typical example of Henri de Braekeleer's large output of realist pictures. He had a predilection for humble subject matters such as the present one. He depicted few landscapes, a certain number of interior scenes (La fileuse, Musée des Beaux-Arts, Anvers), domestic scenes in open air, all often peopled by a single figure, a few genre portraits (Le géographe, Musée des Beaux-Arts de Belgique, Brussels), and some still-lifes.
A painting showing the same garden from a more distant point of view, dated 1864, is housed in the Koninklijk Museum voor Schone Kunsten, Antwerp (Inv. 1203). These two paintings, probably executed around the same time, were most likely inspired by the "Mechelsesteenweg" (now called "Mosselmanslei": Road to Malines) in Antwerp where the De Braekeleer family moved in 1852. There were in this neighbourhood many large gardens exploited by horticulturists and florists.
The present painting shows a humbly dressed woman leaning towards a row of cabbages. Her garment echoes the brick-red of the roofs whereas the vegetables' light green reflects the clear sky's brightness. Essential characteristics of De Braekeleer's art is the restricted palette that focuses on earthy pigments, burnt Sienna, browns, ochre and black enlivened by a very bright light that goes back to Pieter de Hooch's (1629-1684 ) pictorial effects.
Henri De Braekeleer belonged to the Belgian school of genre painters that focused on an immediate contact with their subjects and displayed a new realism that would precede and announce the school of The Hague. The artistic links between the northern and the southern parts of the Netherlands were indeed still very strong even after the independence of Belgium in 1830. 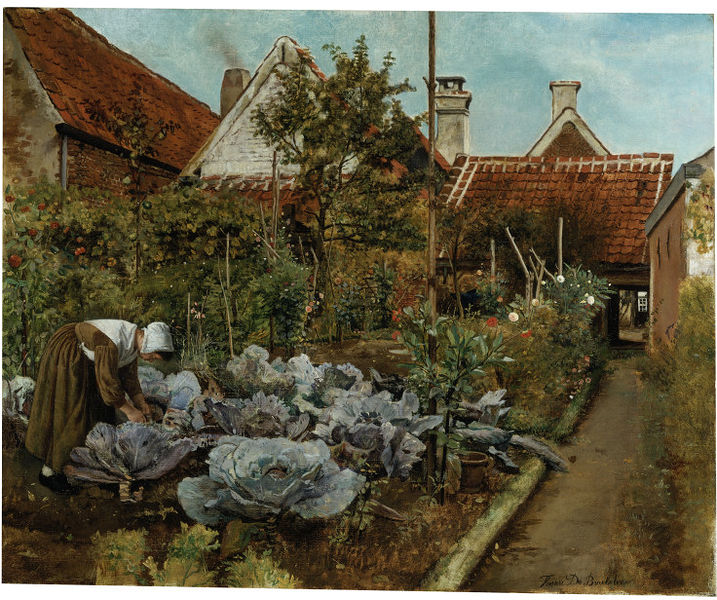