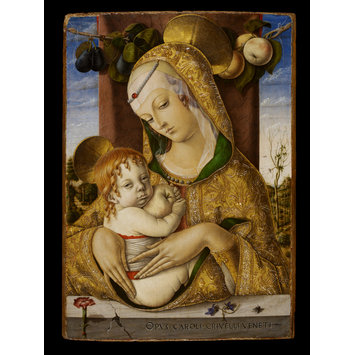 Carlo Crivelli (ca. 1430-1495) was probably born in Venice where he may have been the pupil of Jacopo del Fiore or Giambono but his style shows also the influence of the school of Squarcione in Padua, especially his pupils: Mantegna, Marco Zoppo and Giorgio Schiavone. He had to flee Venice quite soon in his career and was living by 1465 in Zara in Dalmatia (now Zadar, Croatia), then a province of the Venetian Republic. By 1483 he had settled in Ascoli Piceno, the largest city in the southern Marches, where he died in 1495.

This painting is a small devotional picture showing a Madonna and Child embraced, standing before a parapet. The Madonna wears a lavish gilded stucco mantle in the Gothic fashion and stands before a dark red embroidered cloth of honour with on top a swag of fruits. In the background is a distant hilly landscape with green trees on the left and a leafless tree on the right, enlivened by the deep blue hues of the sky. Fruits and flowers in this composition enclose Christian symbolic meanings alluding to the life of Christ and are not therefore mere decorative devices. Pictures of this kind were very popular in the 15th century and appear to constitute an important part of Crivelli’s oeuvre.

The Virgin holding the Child in front of her, wears an elaborate gilded stucco mantle and transparent veil, and stands before a parapet on the top of which are a carnation, two violets and a fly. Behind her is a dar red embroidered cloth of honour across which hangs a swag of figs and peaches. On each side, one can distinguish a distant lansdcape with green trees on the left and a leafless tree on the right.

An Austrian export seal on the back (F.I) suggests that it was exported from Italy before 1864, but it is not known when it was acquired by John Jones.
Bequeathed to the museum in 1882.

The original attribution to Carlo Crivelli has long been confirmed since the bequest of the painting from the Jones collection in 1882. The composition, which probably dated around 1480 for stylistic reasons (among which the ringlets that disappear from Crivelli's oeuvre after 1482 while around the same time, the heads start casting a shadow on their haloes) reproduced the formula of Crivelli's earliest known Madonna and Child, Accademia di Carrara, Bergamo.

The painting shows the Virgin's half-length figure standing before a parapet holding the Child against her. Behind her is a dark red embroidered dossal, across which hangs a swag of fruits with figs and peaches. Reminiscent of Mantegna's art, these are not only depicted for decorative purposes but enhance the devotional significance of the image. They enclose Christian symbolical meanings and relate to the story of Christ: Redemption (peach) and Fertility (fig).

Behind the dossal or cloth of honour is a bird-view of a hilly landscape showing on the left flourishing trees and on the right an isolated leafless tree. Again, trees are symbolically important in the religious iconography and act as a link between the sky, the earth and hell. As flourishing, they allude to the regeneration whereas leafless trees stand for a prediction of death.

Furthermore, the leafless tree, an important feature in Veneto-Paduan devotional art of the 1450s, may allude to the 'Tree of Knowledge' which is believed to have survived under this form in the Earthly Paradise. This bare tree already appeared in the early Bergamo Madonna and in other compositions by Mantegna and Schiavone (see Mantegna, Agony in the Garden (1460) and Schiavone's Madonna, (late 1450s) both in The National Gallery, London).

Symbols for life and death pervade the composition, which structure reiterates this idea with the parapet, cracked all'antica, which is sometimes interpreted as an altar, alluding thus to the coming sacrifice of Christ.

On the parapet are two more symbolic flowers: the pink or carnation which relates since the Middle Ages to the Passion of Christ while violets are Marian flowers enhancing the Virgin's humility and purity. These floral symbols are counterbalanced by the fly on the parapet far right, which represents evil and justify somehow the coming sacrifice of Christ for the redemption of mankind.

Small devotional pictures of this kind were made to solicit prayers and meditation from the believer who was supposed to look at it. This is the purpose of the symbolical fruits which act as reminders of the religious credo and the reason why the Virgin and the Child are looking in two different directions so as to embrace the whole family kneeling before them,

Characteristic of Crivelli's art are the very neat and pronounced contours and the minimal albeit sharp shadowing. The golden-light palette enlivened by hues of deep blue in the sky and the pale carnation as well as the very elongated almost boneless hands may have been inspired by Netherlandish art. The very elaborate Virgin's mantle of gilded stucco (like in the Bergamo Madonna) witnesses Crivelli's taste for lavish costumes and intricate textile patterns but also betrays a somewhat archaic feature characteristic of the Gothic art.

This small devotional image seems to have been very popular among Crivelli's contemporaries as at least three replicas of it survived: (1) private collection, Venice, (2) ex-Collection Eissler, Vienna; Duveen, New York (probably autograph), (3) Ca' d'Oro, Venice (school) (Zampetti, 1961). Crivelli appears as an outstanding artist in the 15th-century Italy, whose oeuvre remarkably shows a combination of styles and influences that nonetheless depart from the prevailing interests of Renaissance artists.

Christians in the Middle Ages and Renaissance periods expressed and strengthened their faith through public rituals, such as celebration of the Eucharist, and personal devotions conducted in a private chapel, monastic cell, or simply in a secluded part of their home. In Western Europe, a form of spirituality that emphasized the emotional involvement of the faithful emerged by 1300. Believers were encouraged to contemplate events from the life of Christ, the Virgin, or the saints, as if they were present.

Images of the Virgin and Child were among the most popular images for private devotion and these were primarily small religious paintings suitable as a focus for private worship, as opposed to larger altarpieces intended for public display. Such images frequently emphasized the tender relationship between the mother and her child.

A painting of the Virgin Mary with Christ child sitting on a parapet, by Carlo Crivelli, ca. 1480

It is generally dated pre-1490 because of the omission of the word 'Eques' in the signature: in 1490, Crivelli was knighted by Ferdinand II of Naples. 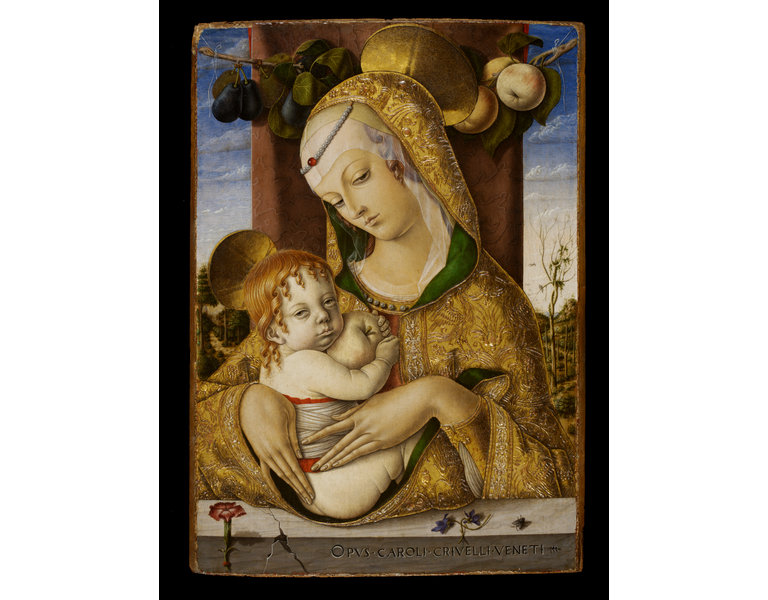