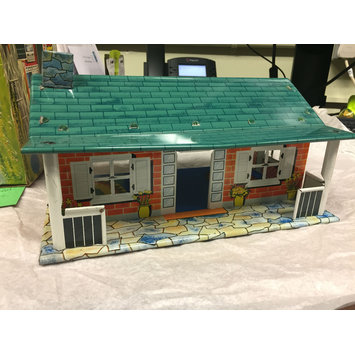 A small dolls' house, with furniture accessories and original packaging. The single-room house is made from sections of pressed tin-plated mild steel, colour lithographed to resemble a single storey house made from red-orange bricks, with green slate roof, white shuttered windows and stone chimney. At the front is a veranda with crazy-paved patio. The inside is printed with a domestic scene, with rugs on the floor and a television set on the wall.

Accompanying the dolls' house is a printed card box showing illustrations of the interior and exterior of the toy.

The donor stated that the dolls' house was a gift from her grandparents in about 1965.

The earliest known ‘Baby House’ (meaning small or doll), was commissioned in 1557-8 for Albert V, Duke of Bavaria. Although we would today identify objects such as these with children’s playthings, they were originally a kind of ‘cabinet of curiosities’ for the entertainment of wealthy men. Later, they were also a useful educational tool for teaching wealthy young women how to run a household, providing a useful visual aid.

Demand for dolls’ houses grew significantly from the beginning of the 19th century; an increasing number of families in Britain were in a position to commission large examples for the amusement of both children and adults. In modern times, dolls houses are still designed and created by skilled craftspeople, but are also mass produced at an accessible price, which has made them a fixture of childhood in Britain. Throughout their history dolls’ houses have provided a fascinating insight into architecture, domestic interiors, and the way people lived, whilst usually revealing an adult, idealised version of life.

Louis Marx & Co. was one of the most prolific toy manufacturers of the twentieth century, founded in New York in 1919 by brothers Louis (1896-1982) and David Marx. By the 1950s, the company’s great status meant it had been able to expand its manufacturing operation to several international locations, including Swansea in South Wales. In 1972, Louis Marx sold the company to the Quaker Oats company and finally retired. However, by 1980 a series of unfortunate market events had resulted in the disappearance and liquidation of the brand. 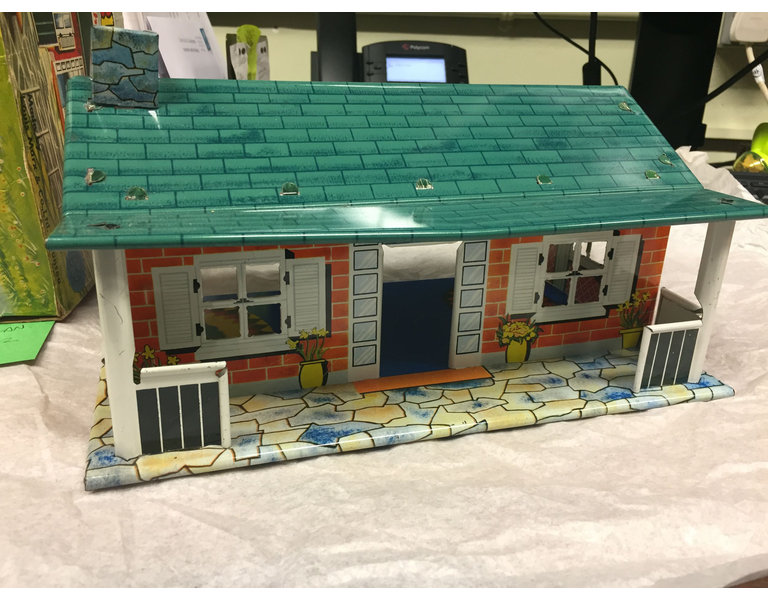