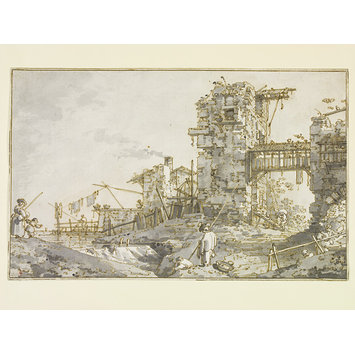 An imaginary composition: ruined water-mill beside a stream

Canaletto made a large number of fanciful views of tumbledown buildings, normally set in villages or the countryside, known as vedute ideate. Unlike capricci, which usually took existing buildings and placed them in new and sometimes absurd settings, with vedute ideate Canaletto generally invented most parts of the composition. Here a ruinous tower and watermill provide a scene of picturesque dilapidation.

Drawing of a ruined tower and water-mill beside a stream, with clothes drying on a line.

Pen and ink and wash

Environs de Venise
Inscribed on the back of the drawing. This inscription suggests that it could have previously been in a French collection (see: Constable, no.803, p.601).

Historical significance: Giovanni Antonio Canal, called Canaletto began his career by assisting his father Bernardo Canal (1664?-1744) in producing stage scenery. He accompanied his father to Rome in 1719-20. It was in Rome that he began to paint topographical views. Following his return to Venice in 1720 he seems to have stopped painting scenery completely in favour of producing topographical paintings. Following the example of Luca Carlevarijs, the first main exponent of Venetian veduta or view paintings, Canaletto began to produce more accurate views of Venice following his return. Canaletto's works appealed specifically to foreign visitors to the city and one of his key patrons was Consul Joseph Smith (c.1674-1770). From the 1740s Canaletto began to produce Capricci, which combine fanciful architecture and landscapes. In 1746 he travelled to England where he painted views of London and country houses for a number of English patrons. He remained almost entirely in England until 1755 when he returned to Venice. He was elected a member of the Venice Academy in 1763.

The ruined tower of a watermill stands in the centre of the composition. It is joined to another building on the right by a wooden bridge. The waterwheel is situated between the mill and a distant cottage. The mill stream runs down into the foreground of the composition. This rushing water contrasts with the calmness of the lagoon at the edge of the cottage walls. The scene is dotted with everyday details such as broken fencing, two cranes attached to the mill, and a washing line. Various figures populate the view, two men are shown fishing from the millstream in the foreground whilst a woman and child stand on the far left. Canaletto produced a number of highly finished capricci drawings which are works of art in their own right. A number of these incorporate use the location of the bank of a lagoon. This motif also occurs in Imaginary composition: ruins of a church by the Lagoon, also in the collection of the Victoria and Albert Museum (inventory CAI. 423).

A 'capriccio' is a painted, drawn or engraved composition that combines imaginary and realistic architectural features in a picturesque setting, often dotted with small figures, and mostly displayed as wall schemes for interior decoration. It emerges as a genre during the early 18th-century Rococo period, and became extremely popular during the era of the Grand Tour of Europe, stimulated by the need of recording topographical settings. The Italian landscape, which abounded with classical ruins, was especially favoured for this new genre painting. It particularly developed in Venice with such artists as Marco Ricci (1676-1730) and his uncle Sebastiano Ricci (1659-1734), together with Canaletto (1697-1768), Giambattista Pittoni (1687-1767) and Giovanni Battista Piazzetta (1682-1754), and in Rome where Giovanni Paolo Panini (ca. 1692-1765) was the most representative of the 'capriccio' painters. The genre declined during the early part of the next century, gradually transformed and was eventually absorbed by the Romanticism.

Pen and ink drawing by Canaletto depicting an imaginary composition with a ruined tower and water-mill beside a stream. Italy, ca. 1755-1768. 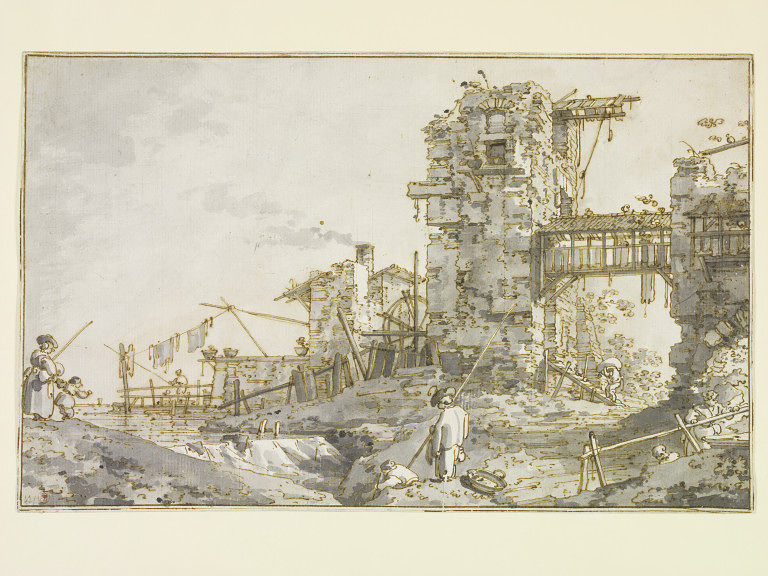