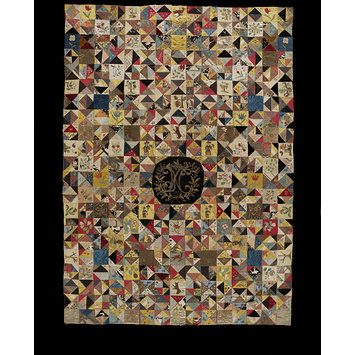 In ‘piecing’ or ‘patchwork’, small pieces of fabric are sewn together to produce a decorative design. The most enduring method in Britain is done by hand, and is known as ‘piecing over paper’. The pattern is first drawn onto paper and then accurately cut. Small pieces of fabric are tacked round each of the shapes, and then joined together from the back using overstitch. The papers are usually removed once the project is complete. Geometric shapes produce some of the most striking examples, such as this cover of squares and triangles. The work is often embellished with appliqué and embroidery to enhance the design. A bedcover that has been pieced but not wadded is often referred to as a coverlet.

This patchwork of fashionable silks was probably made to form part of a larger bed cover or screen, and was hand-pieced over paper. The tacking stitches and paper template are still intact, suggesting that the cover was never finished. Papers still visible in the reverse provide a record of reading habits at the time, including a newspaper from 1705 which records the trial of the notorious plotter, Titus Oates.

For the embroidery, the maker has taken inspiration from many sources. Several of the silk patches have been stitched with motifs taken from popular prints and books, including Aesop's Fables.

Patchwork coverlet made up of a combination of plain- and complex-weave silks. The front comprises almost all silk fabrics, but there are a small number of block-printed cotton patches over-printed with gold. The majority are appliqued or embroidered with silver and silver-gilt threads and silk threads. Some of the patterned silks date from the 1680s and '90s. The patches have been pieced using coloured silk threads, including green, yellow and pink. The design incorporates small embroidered panels that were worked in silk thread on a plain-weave silk ground at an earlier date. The motifs on these panels include thistles and pomegranates. A more naive hand has embroidered over the remaining patches after the completion of the pieced design. The central monogram is worked in silver and silver-gilt thread on a black silk velvet ground, and was probably inserted in the late eighteenth century. The paper template and tacking stitches are still intact.

In the middle is a monogram of black silk velvet worked in silver-gilt and silver thread with the letters 'N' and 'S', surrounded by olive branches. The patches are worked with various figures and botanical references, including men holding umbrellas, ladies in folk dress (?), birds, animals (including Aesop's fable of the fox and the vase), birds, butterflies, stems of flowers and fruit, roses, carnations, tulips, pomegranates and pears.

In eighteenth-century Britain, the bedrooms of the wealthy were used for the display of luxury goods. They were a place where servants entered, family members rested and guests were entertained. Ornamental patchwork bed hangings and quilted bed covers reflected a household's access to a range of fashionable textiles, from colourful imported chintzes to sumptuous silk velvets. Many were bought specially, but householders also recycled textiles from other objects, a common practice given the financial and emotional investment in valuable fabrics.

This patchwork of silks and velvets would have been made as a bedcover or screen. The original design incorporates small embroidered panels, and a wide variety of plain and
patterned silks. A less technically accomplished hand has added figurative embroidery and appliqué to many of the patches after the completion of the piecing. The additional embroidery shows a wide range of popular needlework subjects, including four chinoiserie figures and a scene from Aesop’s fable ‘The Fox and the Vase’.

No information concerning the provenance of the coverlet was available when it was acquired, but when the later lining was removed for conservation, it revealed an early eighteenth century paper template. Newspaper cuttings relating to the trial of Titus Oates and an advertisement for a proprietary medicine date the template to around 1705. Plain paper has also been used in several areas. Because paper was an expensive consumer item, it was common practice in even the wealthiest households to recycle it. Alongside the range of silks, this suggests an affluent household with access to a range of luxury consumer goods. In 1709 the Female Tatler described the exciting experience of shopping for such goods: ‘The shops are perfect gilded theatres . . . As people glance within their doors, they salute them with – Garden silks, ladies Italian silks, brocades, tissues, cloth of silver or cloth of gold, very fine mantua silks, any right Geneva velvet, English velvet, velvet embossed.’

Quilt-makers took inspiration from many sources. Several of the silk velvet patches here have been embroidered with motifs taken from popular prints and books, including Aesop's Fables. Intended as part of a bedcover or screen, the coverlet also provides a record of the reading habits of women at the time. One paper template still inside (over which a patch was sewn) was taken from a newspaper of 1705.

One of the broadsheets used for the paper template is dated 1705. 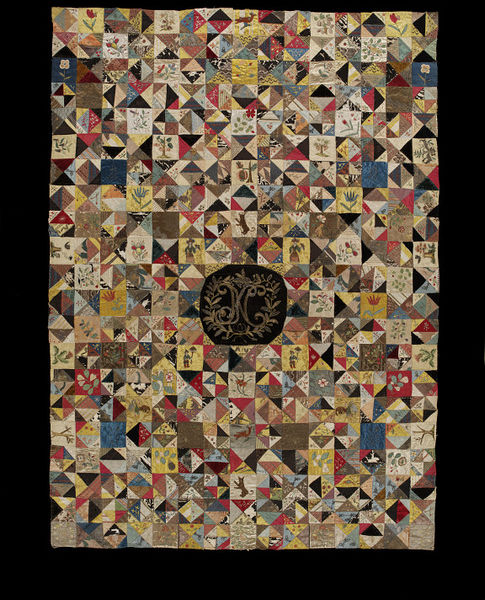