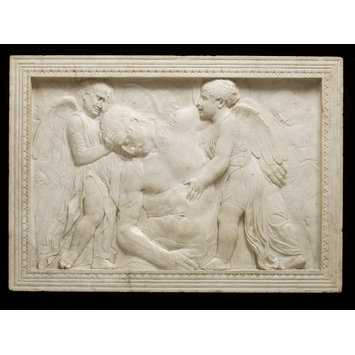 The dead Christ tended by angels

Believed by many to be the work of Donatello and his one-time partner Michelozzo, this languid Christ relates more closely to later works and perhaps deliberately recalls Donatello’s style. The wounds of the Passion in Christ’s hands, feet and side were a focus for meditation on his suffering. Unusually, the side wound is missing here, although the wounds from the nails in Christ's hands are distinctively carved.

In the centre is the body of Christ supported by two angels. His head is inclined on his right shoulder and his left arm is raised on the shoulder of the angel beside him. The figure is cut off at the thighs by the integrally-carved frame, and also at the proper right hand which rests on the left thigh. Christ's hands bear the distintive marks of the nails used to support his body on the cross. He has a cruciform halo, and wears a plaited crown of thorns. The angel on the right is shown in profile and moving forwards, his right hand on Christ's shoulder, his left on Christ's chest. The angel on the left supports Christ's head with his right hand, and presses his left hand in a gesture of grief against his face. Both wear loosely flowing robes. In very low relief in the background are three lamenting angels. The scene is recessed into an integrally-carved foliated border.

The relief is closely related in style to the work of Donatello, and is believed by some scholars, to be by the master's hand, together with a workshop assistant, possibly Michelozzo with whom Donatello was in partnership for several years. However, the absence of the side wound, made all the more telling by the distinctive wounds in the hands that refer to Christ being nailed to the cross, and the languid treatment of the torso suggest that the relief dates to a later period. There was a particular interest in the sculpture of the quattrocento around the 1530s and the relief was possibly created as an homage to the great master in around 1520-50.

Believed by many to be the work of Donatello and Michelozzo,
this languid Christ relates more closely
to later works and perhaps deliberately
recalls Donatello’s style. The wounds
of the Passion in Christ’s hands, feet
and side were a focus for meditation on his suffering.
The side wound is unusually missing.

Museum no. 7577-1861 [2020]
Probably made for the front of an altar, the relief was designed by Donatello and executed in his workshop. The head and left side of Christ appear to have been worked up by Donatello, with a studio assistant responsible for the lateral and background figures. The relief relates stylistically to the external pulpit of Prato Cathedral (completed 1438). The composition appears to have been known by Giovanni Bellini, who uses a similar arrangement of figures in his Pieta of 1474 in the Pinacoteca Comunale, Rimini. [March 1992] 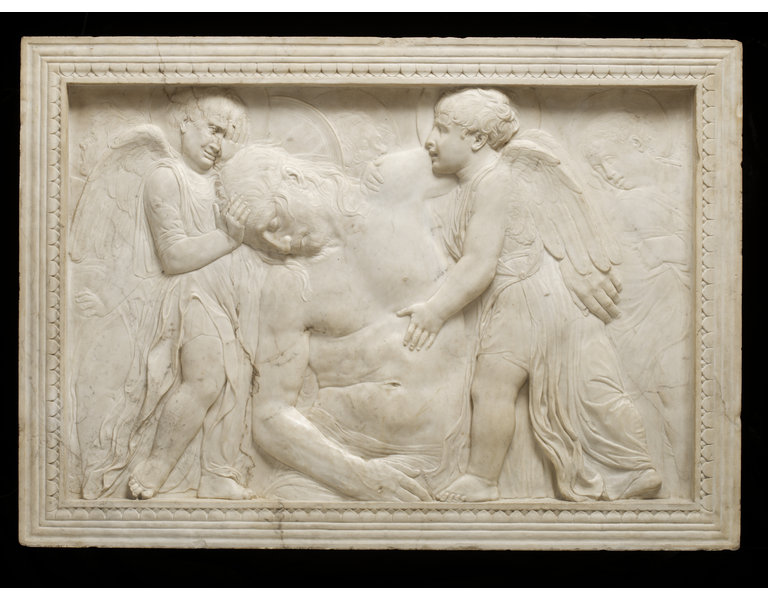