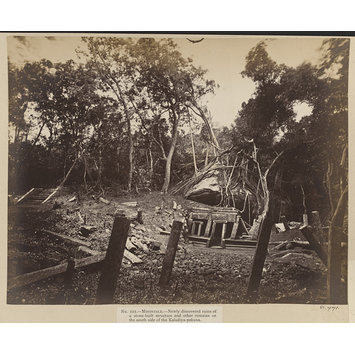 Mihintale- Newly discovered ruins of a stone-built structure and other remains on the south side of the Kaludiya-pokuna.

This photograph shows the ruins near the Kaludiya pokuna, or ‘black water pool'. This is the largest of several ponds located at the foot of the western slopes in Mihintale. The ruins are of buildings used by monks as monasteries and as residential cells.

A stone structure consisting of two sets of posts and lintels as well as stone slabs is set onto a graduated carved base in the middle distance. The ground level of the structure is raised and the top is covered by stone slabs earth. It is set into a hillside and tree roots spread down over the structure. In the foreground pillars stand at an angle and two sets of steps, part of other structures, are on the left. The area is surrounded by trees and numerous remains of smaller structures and sculptural pieces are scattered about.

The mount is white. On the right hand side is a label which reads: A.in.MIHINTALE. A label printed with title is pasted underneath the photograph. 'Mihintale' is handwritten on the bottom left hand corner of the mount. The museum number is written in the bottom right hand corner.

Historical significance: Kaludiya pokuna, or ‘black water pool’, is the largest of the ponds located at the foot of the western slopes in Mihintale. Its complex structure represents just one example of the many advanced hydraulic tanks in the area. The pond is surrounded by remains of a ‘poya ge’, the building where monks met at regular intervals to perform rituals, ‘cankamana patha’, a promenade, parivena and pasada, residential cells, janta ghara, a bath house and vacca kutti, a lavatory. This photograph pictures remains of surrounding structures such as these. 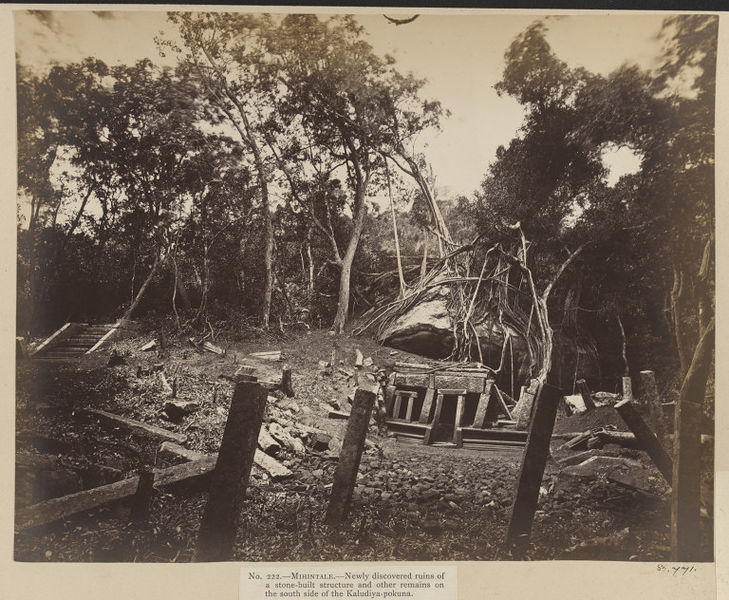