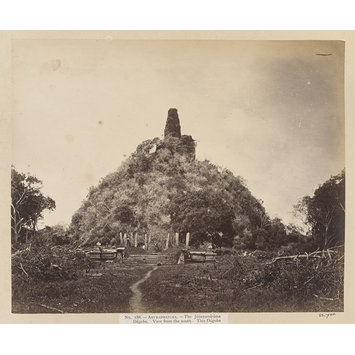 Anuradhapura-The Jétawanáráma Dágoba. View from the south. This Dágoba was built by King Maha Sen in the third century after Christ. It is a huge mass of solid brickwork, 396 feet in diameter and 246 feet high. (No. 188)

The Jetavanarama Dagoba is the highest brick-built dagoba in the world and the largest Buddhist building in southern Asia. The dagoba is almost 122m tall, with a base diameter of more than 113m, and at its core is a gigantic earthen mound encased in brickwork. Begun by King Mahasena (275-92), its massive scale was designed to rival the Maha Vihara, also in Anuradhapura. The paved platform on which it stands covers more than 3 hectares and it has a diameter of over 100m.

The dome of the dagoba is covered with grass and shrubs. The sqare platform and spire are visible. At the base of the dome there is a stone structure, consisting of a series of pillars, steps up to a low lying platform base, and two stone reliefs of dwarves on either side of the steps. A male figure stands at the top of the steps between two of the pillars. In the foreground, there is a dirt path where the grass has been worn away as well as trees, both standing and fallen.

BFK Ri
Shallow imprint on the photographic paper, upside down and in the lower left hand corner.

Historical significance: The Jetavanarama Dagoba is the highest brick-built dagoba in the world and the largest Buddhist building in southern Asia. The dagoba is almost 122m tall, with a base diameter of more than 113m, and at its core is a gigantic earthen mound encased in brickwork. Begun by King Mahasena (275-92), its massive scale was designed to rival the Maha Vihara, also in Anuradhapura. The paved platform on which it stands covers more than 3 hectares and it has a diameter of over 100m. It is currently being renovated with help from UNESCO. Today, the nearby Jetavanarama Museum exhibits finds from the site discovered during reconstruction, including coins, Buddhist statues, seals made from precious stones, and beads made from clay, silver, gems, gold and ivory. 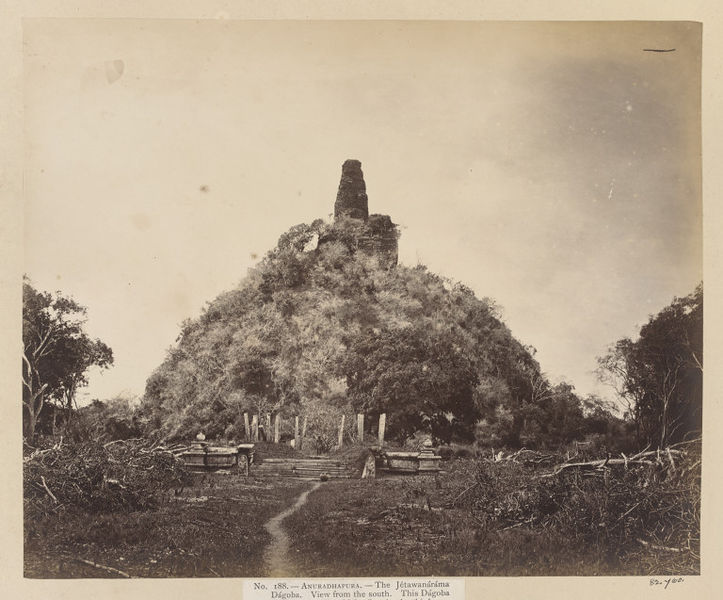