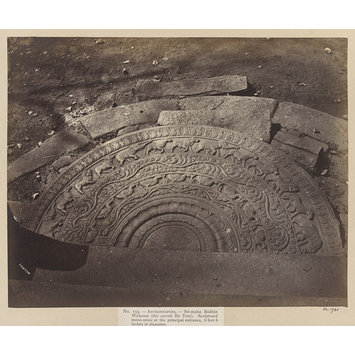 Semi-circular moonstones are found at the base of steps leading into Buddhist sites in Sri Lanka. The carvings have been interpreted in many ways. The half-lotus in the centre may be a symbol of enlightenment. On the outer ring the different animals could represent the four stages of life, the elephant - birth, the horse - old age, the lion - illness, and the bull - death. The geese in the inner ring represent purity.

A semi-circular, carved moonstone with two steps visible at the bottom of the photograph. Photograph was taken as photographer stood on steps. at the foot of the steps. In addition to stylised floral designs, the moonstone is intricately carved with a shallow relief depicting a row of birds and a row of miscellaneous animals including elephants, lions, oxen and mules.

LAWTON
Written on negative and appears in the bottom left corner.

Historical significance: The ‘Bo’ (‘Bodhi’) tree was planted as a cutting from the tree in Bodhgaya under which Buddha found Enlightenment. It was brought by the Princess Sanghamitta as a gift from her father, the Buddhist Indian Emperor Ashok, after 236 in the 3rd century BC. This huge specimen of Ficus religiosa, or sacred figtree, may legitimately be the oldest tree in the world, substantiated by a history of guardians keeping uninterrupted watch over it. It has been protected by monks since it was planted and is now guarded by the Army, while its well-being is tended to by the Director of the Peradeniya Botanical Gardens. It stands at the crossroads of Sri Maha Bodi Mawatha Mihindu Road and Kurunegala Road and is supported by a metal structure, from which you can see the top of the tree from a terrace. There are a number of other Bo trees around Sri Maha Bodhi and every twelth year pilgrims come to make offerings during the Snana puja and bathe the tree in milk. This sculptured moonstone is located at the base of the stairs outside the main entrance.

Photograph of a Moonstone from the principal entrance of the Sri-maha Bódhin Wahanse (the sacred Bodhi Tree) at Anuradhapura, Sri Lanka, by Joseph Lawton, albumen print, 1870-1. 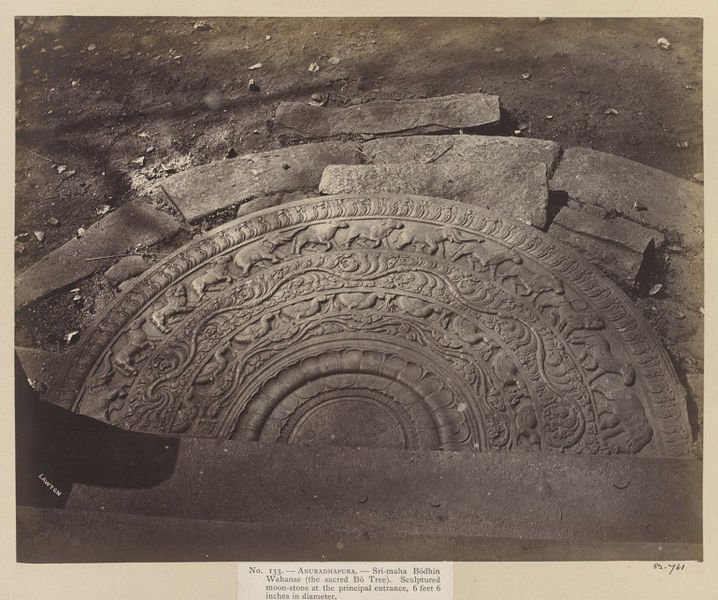