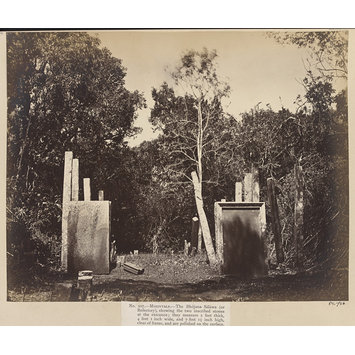 Mihintale- The Bhójana Sáláwa (or Refrectory), showing the two inscribed stones at the entrance; they measure 2 feet thick, 4 feet 1 inch wide, and 7 feet 1 ½ inch high, clear of frame, and are polished on the surface.

Mihintale is one of the first homes of Buddhism in Sri Lanka and features some of the country’s most sacred Buddhist sites. The Bhojana Salava is the monk's refectory. At the entrance to the refectory and the ajoining Chapter House are two stone slabs with 10th century inscriptions.

Official photographic surveys conducted by Lawton and other photographers documented the architecture and facilitated antiquarian scholarship. However, as a commercial photographer, Lawton made sure that his photographs were not merely documentary. His images were taken to appeal to tourists and overseas buyers seeking picturesque views of ancient ruins overgrown with creepers and gnarled trees.

Two large stone slabs with inscriptions stand upright in a clearing: the stone on the right is surrounded by a stone 'frame', the stone on the left is not. There is a series of pillars standing behind the stones and smaller fragments are scattered on the ground nearby. Trees and other foliage surround the stones, pillars and fragments.

WTON
Written on negative and appears at the bottom of the print. The 'LA' of 'LAWTON' has been trimmed off.

BFK Rives No.74
Shallow imprint on the photographic paper, upside down and in the bottom left corner of the print.

The mount is white. On the right hand side is a label which reads: A.in.MIHINTALE and beneath it is 'Duplicate of 22' handwritten. This is most likely a reference to a photograph from the same series acquired in 1912. A label printed with title is pasted underneath the photograph. The first three letters of the site name are cut off and 'intale' is handwritten on the bottom left hand corner of the mount. The museum number is written in the bottom right hand corner.

Historical significance: The Bhojana Salava is the monk's refectory. At the entrance to the refectory and the ajoining Chapter House are two stone slabs with 10th century inscriptions.

Photograph of two inscribed stones at the entrance of the remains of Bhójana Sáláwa at Mihintale, Sri Lanka, by Joseph Lawton, albumen print, 1870-1. 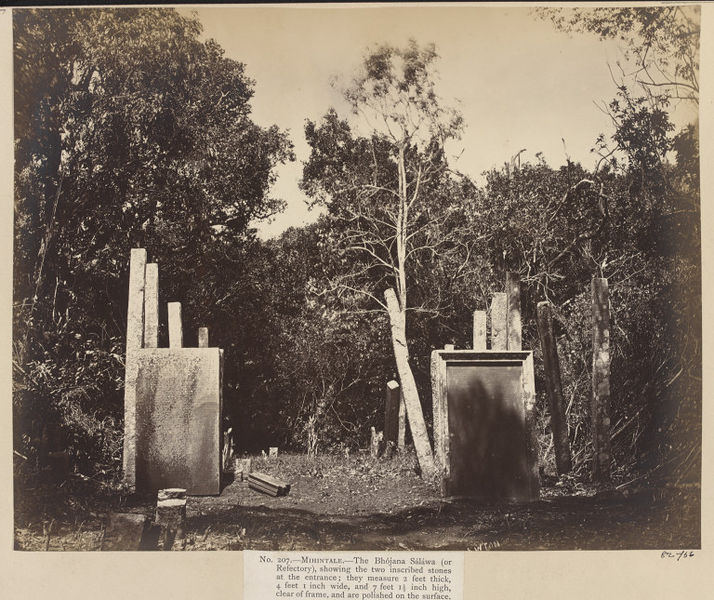