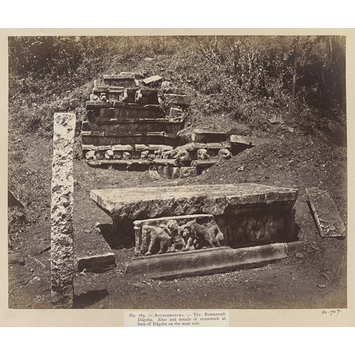 Anuradhapura- The Ruwaneli Dágoba. Alter and details of stonework at base of Dágoba on the west side.

This photograph pictures some of the numerous remains of smaller structures and sculptural pieces which are set into the landscape surrounding the Ruwanweli Dagoba (‘Gold Dust Dagoba’). Also known as Mahathupa or ‘Great Stupa’, it was begun by King Dutthagamenu to house Buddhist relics in the 2nd century and is considered one of Sri Lanka’s most impressive dagobas.

Altar and structural remains at the base of a hill surrounded by grass and foliage. There is a pillar on the left hand side of the image and a very worn frieze of elephants is carved on the front of the altar in the foreground. Carved concentric circles appear on the remains of a structure in the background. These ruins lie at the base of the Ruwanweli Dagoba in Anuradhapura.

LAWTON
Written on negative and appears in the bottom left hand corner of the print.

Historical significance: The Ruwanweli Dagoba, literally the ‘Gold Dust Dagoba’ but also known as Mahathupa or ‘Great Stupa’, was begun by King Dutthagamenu to house relics in the 2nd century and is considered one of Sri Lanka’s most impressive dagobas. The king fell ill, however, and entrusted his brother Saddhatissa to complete the building project. Decorated with remarkable opulence, the dome (80 m in diameter at its base and 53 m high) was covered with bamboo reeds and painted with lacquer and imitation gold. This photograph pictures some of the numerous remains of smaller structures and sculptural pieces which are set into the landscape surrounding the dagoba. 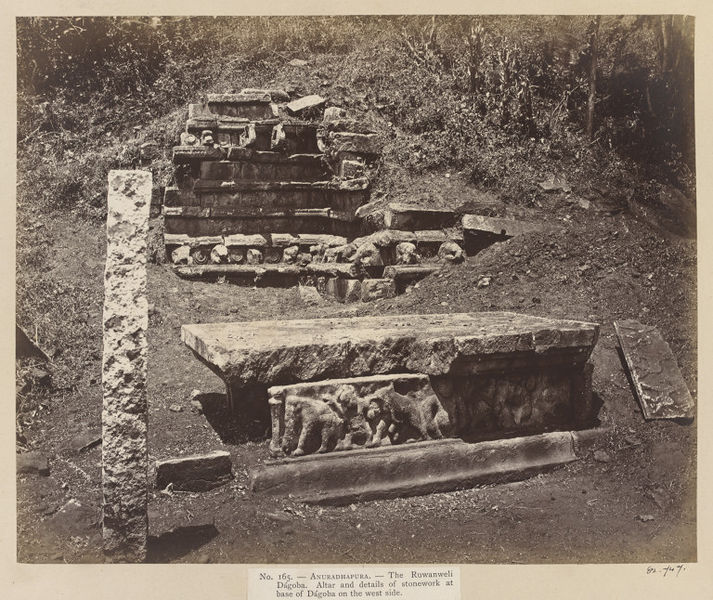