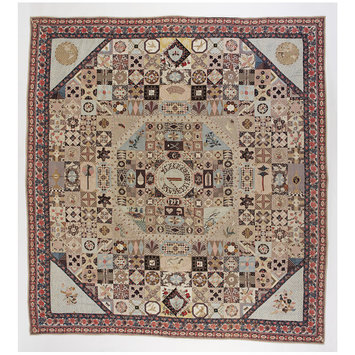 In 'piecing' or 'patchwork', small pieces of fabric are sewn together to produce a decorative design. The most enduring method in Britain is done by hand, and is known as 'piecing over paper'. The pattern is first drawn onto paper and then accurately cut. Small pieces of fabric are tacked round each of the shapes, and then joined together from the back using overstitch. Geometric shapes are most common, so this highly figurative example testifies to the extraordinary skill of the maker. A bed cover that has been pieced but not wadded is often referred to as a coverlet.

In the 18th century, the bedroom was a public space and visitors to wealthy homes were sometimes shown treasured objects such as this intricately pieced bedcover. The design includes various motifs that reflect the maker's world - her sewing scissors, and flowers and birds from her garden. The four pieced maps in he corners show an interest in geography at the time. They are based on popular map samplers, which were created by some young girls as part of their education in needlework.

Coverlet made from a wide range of block-printed cottons of the 1780s and '90s. The small prints are typical of those used for gowns of the period. The predominant technique is piecing, but the maker has also used embroidery in several areas. The complex design includes a wide range of references to the domestic, built and geographical landscape, including four maps in the four corners representing England and Wales, Scotland, the Eastern Hemisphere and the Western Hemisphere. A brown plate-printed cotton showing birds and butterflies has been used directly in the top left and right of the object, and as the design template for two pieced birds and for several butterflies in the garden scenes. All of the non-figurative panels (comprising geometric patterns) are symmetrical, both in design and in the textiles used. It is lined with a plain weave white linen with old darning repairs which suggests that it has been recycled from within the home. Pieced into the centre are the initials M/C/B and the date 1797.

This object was probably created as a decorative bed cover for a fashionable middling or upper-class household. The bedroom was one of the main spaces in which women could demonstrate their knowledge of the latest fashions through the careful coordination of upholstery and furnishings, and this piece may have been shown to visitors as they were led from room to room to admire the decor. The leisure pursuits of such women were fashioned by various categories of trade, time, space and travel. Nowhere is the collusion between these more apparent that on this patchwork coverlet, where the maker has created a microcosm of her world in cloth. Surrounding the central timepiece are domestic tools, including a pincushion, needle, thread and scissors. As the borders extend outwards, the references move outside the home into the garden, where there are ducks, birds, butterflies and trailing honeysuckle. At the far left and right of the coverlet, the maker has pieced two vases similar in shape to neoclassical examples of the late eighteenth century. The four corners extend out to the far corners of the world, where the maker has drawn on map samplers as the inspiration for England and Wales, Scotland and the Eastern and Western Hemispheres. With more than 40 patches in some of the small figurative scenes, the maker of this object would have required access to an extensive range of textiles, either by involvement in the trade or through conspicuous consumption. The detailed composition and considerable size of the piece also suggest the luxuries of time and space.

In the 18th century, visitors to wealthy homes were sometimes shown treasured objects such as this intricately pieced bedcover. The sundial in the centre is surrounded by the maker's initials and the date '1797'. The patches include various motifs that reflect the maker's world - scissors, parasols, flowers, birds. The four appliqué maps in the corners (showing England and Wales, Scotland, and the eastern and western hemispheres) show the interest in geography at the time. They are based on patterns found in popular map samplers (see T.44-1951). 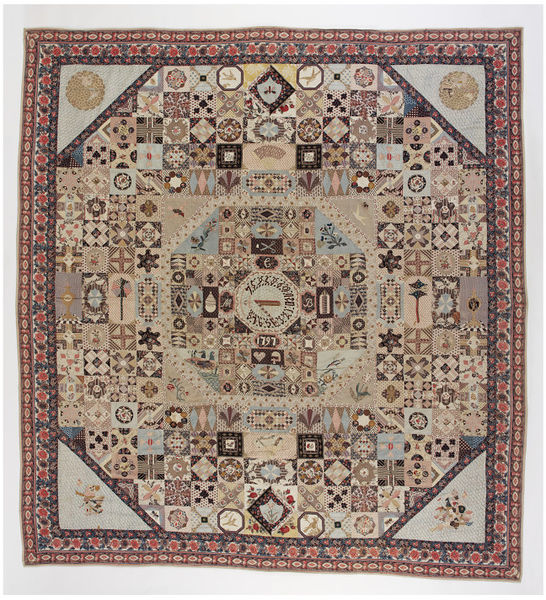