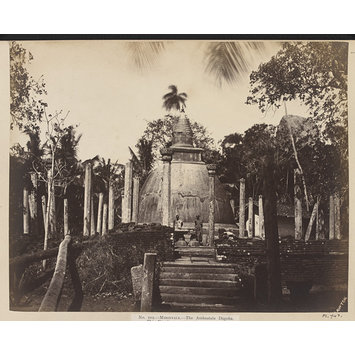 Mihintale- The Ambastala Dágoba. This Dágoba was erected over the ashes of the great missionary Mahindo, who came to Ceylon B.C. 307, and died in the year 267 B.C. It also marks the spot where he appeared in the form of an elk to King Déwánpiya Tissa, and converted that monarch to Buddhism. It is built of brick, plastered with chunam, and measures 23 feet in diameter at the springing of the bell. Fifty-two columns in two rows surround the Dágoba; those in the inner circle numbering twenty, and in the outer circle thirty-two. The shafts are 12 feet high from pavement, and are finished with carved capitals.

The Ambastala stupa or dagoba was erected betweeb 150-300 AD, over the ashes of Mahinda, Emperor Asoka’s son who introduced Buddhism to Sri Lanka. It marks the spot where his conversion of King Devanampiyatissa took place.

A large dome-like structure (the dagoba) rests at the top of a brick platform to which steps lead. Columns, some with intricately carved capitals, encircle the dagoba and the whole of the structure is surrounded by trees. Two male figures stand in front of the dagoba at the top of the steps. Atop the carved stone table, which is positioned in front of the figure on the left, is a carved stone head of a deity.

AWTON
Written on negative and appears in bottom right corner of print. The 'L' of LAWTON has been trimmed off.

The mount is white. On the right hand side is a label which reads: A.in.MIHINTALE and beneath it is written 'Duplicate of 22' though the rest of the number appears to be cut off. It apparently refers to another photograph from this series, acquired in 1912. A label printed with title is pasted underneath the photograph. The title is handwritten on the bottom left hand corner of the mount. The museum number is written in the bottom right hand corner.

Historical significance: The Ambastala Dágoba, or ‘mango tree’ dagoba, is located in the ‘sacred centre’ of Mihintale. It is the holiest part of the site and was built on the location traditionally regarded as the meeting place of King Déwánpiya Tissa and the monk Mahinda, who brought Buddhism from India to Sri Lanka. Today, a large white statue of Buddha stands on a rock overlooking the ‘sacred centre’, erected in 1991 from the donations of pilgrims.

The Ambastala stupa or dagoba was erected over the ashes of Mahinda, Emperor Asoka’s son who introduced Buddhism to Sri Lanka. It marks the spot where his conversion of King Devanampiyatissa took place. The positioning of two Buddhist monks in front of the dagoba emphasises the sacred nature of the site. 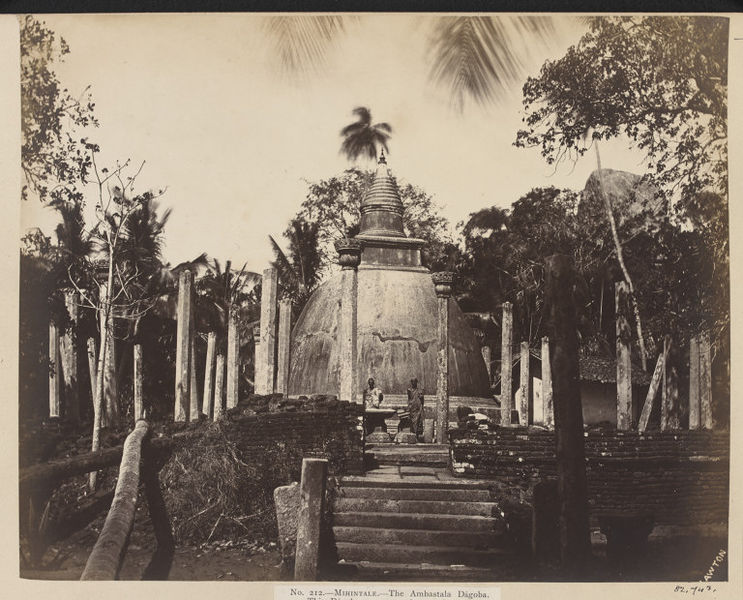