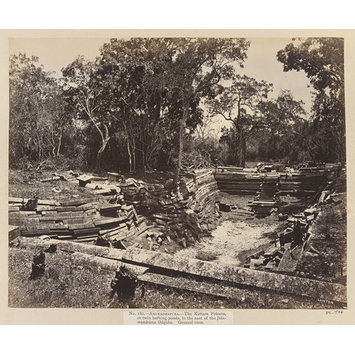 The kuttam pokuna, or twin bathing pools, were 8th and 9th century ritual baths, used by Buddhist monks. Water was transferred through underground ducts, a system that is regarded as an outstanding example of hydrological engineering.

The remains of the tank consist of large, deep rectangular pit with stone slabs on the walls and stone steps leading down into it. Another set of stone steps, half buried, appears to the left of the pit and a male figure stands at the furthermost corner on the left. Standing and fallen trees surround the tank.

LAWTON
Written on negative and appears in the bottom right hand corner of the print.

BFK Rives No.7
Shallow imprint on the photographic paper. Words are partially cut off and appear in the top right hand corner of the print.

Historical significance: The Kuttam Pokuna, or twin bathing-ponds, are 8th and 9th century ritual baths. They were for the use of the monastery and the embankments were constructed to enable monks to bathe. The steps that descend into the water and the bottoms of the pools consist of cut granite slabs. A wall was built around the pool to enclose the compound and steps on either end of the pool are decorated with punkalas (pots of prosperity) and scroll designs. Water for the pools was transferred as well as filtered through underground ducts and they are regarded as an outstanding example of hydrological engineering.

The kuttam pokuna, or twin bathing pools, were ritual baths used by Buddhist monks. Water was transferred through underground ducts, a system that is regarded as an outstanding example of hydrological engineering. 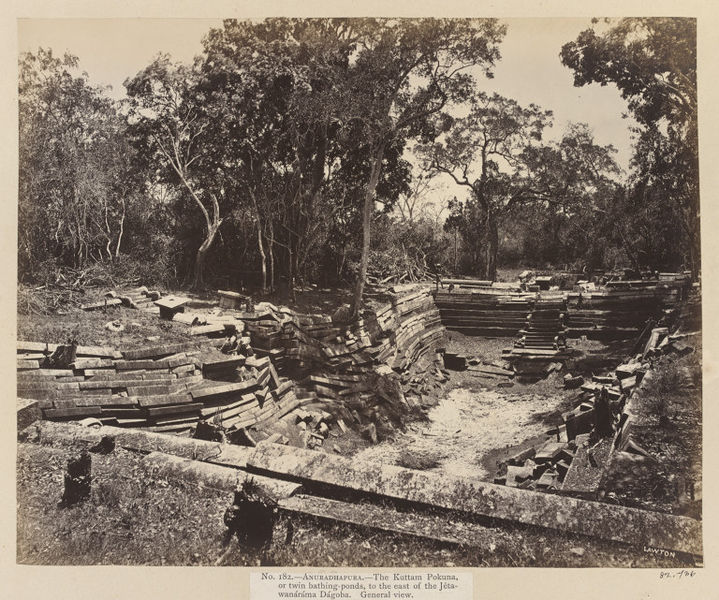