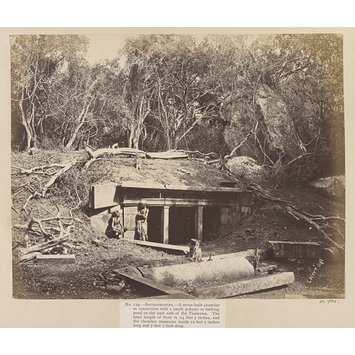 Anuradhapura- A stone-built chamber in connection with a small pokuna or bathing pond on the east side of the Tisáwewa. The total length of front is 24 feet 7 inches, and the chamber measures inside 12 feet 7 inches long and 7 feet 1 inch deep.

This stone-built chamber and nearby bathing pond are on the east side of the Tissáwewa, a tank built by King Devanampiyatissa (307-267 BC).

A small stone-built chamber set into a hill with surrounding trees and fallen logs. The chamber consists of flat stone blocks supported by two pillars. There are two male figures positioned at the opening of the chamber; one standing and one crounching down.

LAWTON
Written on negative and appears in the bottom left hand corner of the print.

BFK Rives No.74
Shallow imprint on the photographic paper. Words are partially cut off and appear upside down at the bottom of the print.

Historical significance: The Tisawewa was built by King Devanampiyatissa (307-267 BC) and is the second massive tank to have been built in Anuradhapura. The pioneer hydraulic engineer, King Pandukabhaya (474-407 BC) built the first massive tank, Abhaya, as early as the 5th century BC. The Tisawewa was associated with the bathing rituals of newly crowned kings. Below the lake and tank bund, a Royal Park has been built which features assorted ruins and the remains of other bathing pools.

Photograph of Stone-built chamber beside a bathing pond on the east side of the Tisáwewa at Anuradhapura, Sri Lanka, by Joseph Lawton, albumen print, 1870-1. 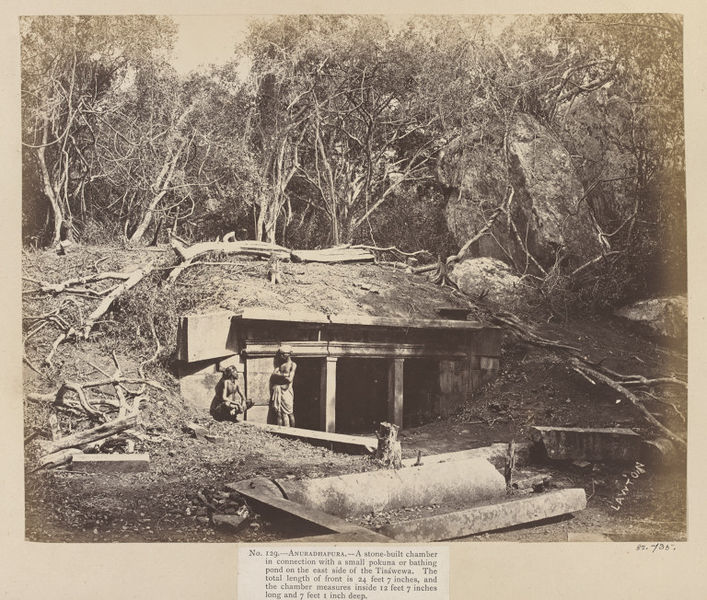