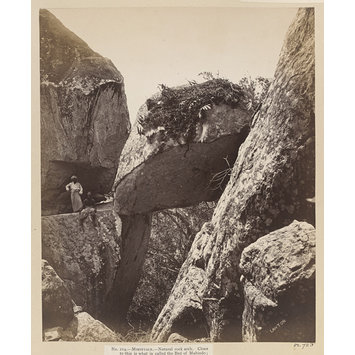 Mihintale- Natural rock arch. Close to this is what is called the Bed of Mahindo; but it is in such a position that it could not be photographed. The natural rock has been levelled, and the bed is simply a portion of the surface, 7 feet long by 3 feet wide, surrounded by a raised fillet with tassel corners. The place was probably used by Mahinda for the purposes of repose and meditation.

In the accompanying label to this photograph, Lawton wrote, ‘This rock formation was close to what is called the Bed of Mahinda: but it is in such a position that it could not be photographed. The natural rock has been levelled, and the bed is simply a portion of the surface. The place was probably used by Mahinda for the purposes of repose and meditation’.

Large rock formation, with a large centrally placed rock resting precariously between two cliff edges. Two male figures appear in a crevice of the cliff edge on the left; one standing and one seated.

The mount is white. On the right hand side is a label which reads: A.in.MIHINTALE. A label printed with title is pasted underneath the photograph. The title is handwritten on the bottom left hand corner of the mount. The museum number is written in the bottom right hand corner.

Historical significance: This is referred to as Mahinda’s bed because of its resemblance to a stone ‘couch’. A natural rock formation similar to and nearby this arch is often visited for its views to the north across the tanks and forested plains. Mahinda, born in the 3rd century BC and son of the Emperor Asoka, was the Buddhist monk who brought Buddhism from India to Sri Lanka.

Lawton wrote, ‘This rock formation was close to what is called the Bed of Mahinda: but it is in such a position that it could not be photographed. The natural rock has been levelled, and the bed is simply a portion of the surface. The place was probably used by Mahinda for the purposes of repose and meditation’. 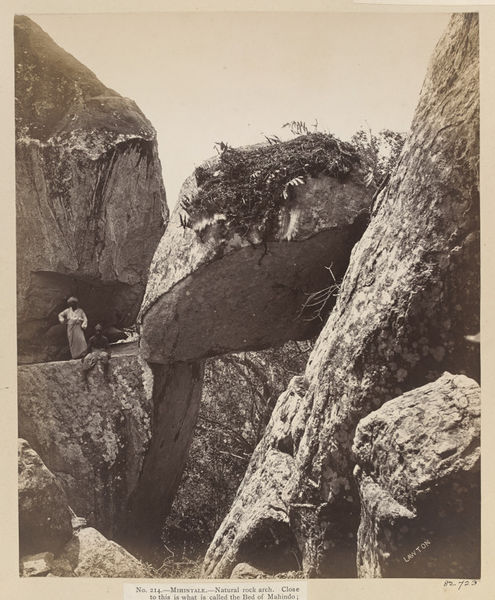