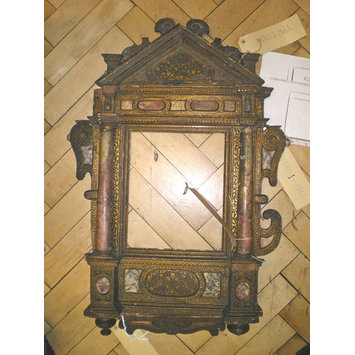 Finish:
Painted and gilt with arabesque detail.
The surface has been painted black on to which the intricate design was worked by painting with a sticky mordant, and applying gold leaf or shell gold. There is now a dark coating over the whole surface which in some areas almost completely obscures the original decoration. This coating was probably applied and a later date possibly to cover any repairs and unify the finish. Where this coating is damaged the gold leaf appears very bright below.
The back is painted with a dark coating.

The oval panel at the bottom differs in style of painting from the rest of the frame and appears to be a replacement, probably for a marble plaque. It is delicately executed. Trace of bole found on the wings of the butterfly, seen below the dark coating, indicate that this area was once coloured. There are also areas of raised decoration (possibly gesso), giving a subtle depth to wings.

Investigation carried out by Christine Powell and Zoe Allen, 2009.

Bought (no further information on acquisition papers, nor included in Pollen 1874.

Monika Kopplin, European Lacquer (Munich, 2010), pp.23-34.
Kopplin notes that Venice traded in shellac, mainly from north-east India, Indochina and Sumatra, and maintains that Islamic lacquered objects (made from as early as the 10th/11th centuries) were undoubtedly present in Venice by the 16th century. Recent studies of the techniques used found that Venetian 'lacquer' was generally made up of linseed oil and colophony derived from pine resin, a composition also mentioned in contemporary writings such as Leonardo Fioravanti (1517-1588) in his 'Compendio di secreti rationali' (Venice 1562). Turpentine of larch, also known as 'Venice turpentine' was also used, though not sandarac, the most important resin in Islamic lacquerwork but problematic on account of its limited availability and complex preparation. Arabesques were applied in powdered gold on the black-painted wood, and gold leaf employed for gilding larger decorative surfaces which were then given a luminous glow through a lustre finish in a variety of colours. Tempera was probably used as well as oils, and a final coat of glossy varnish applied. These studies suggest that the stylistic imitation of Islamic models was coupled with the use of largely identical techniques (p.24, citing Adriana Rizzo, 'Le "laque" vénitien: Une approche scientifique', in Venise et l'Orient 828-1797, exh. cat., Institut du monde arabe, Paris (2006), pp. 244-51)

Hans Huth: Lacquer of the West. The History of a craft and an industry, 1550 - 1950. (Chicago, 1971), fig. 14, pp.6-7. Huth notes that this type of frame is often associated with portraits of the school of Corneille de Lyon, dated c1580, thus offering an approx. date for the frames which are 'lacquered in black and decorated with ornaments in gold, enhanced with colorful marble slabs cut into roundels and squares and arranged very much like those seen on the facades of Venetian palaces of the early sixteenth century. Similar frames noted at the Louvre, Art Institute of Chicago, Museum of Fine Arts, Boston 'and elsewhere'. Notes that frames using the same architectural decoration though without the marble inlay were used for embossed wax portraits executed in Venice by Francesco da Segala towards the end of the 16th century, and for eglomise paintings popular in Venice throughout the 16th century. Suggests that the decoration (in classical and Moresque character) 'was intended to produce an effect akin to the kind of lacquer known in Venice from Turkish bookbindings, weapons, boxes, and other trinkets', and that similarly decorated Venetian objects such as caskets, 'make it most convincing that frames of this kind originated in Venice', and that the association with French paintings does not prove that the frames are French. A similar frame used before 1538 by Albrecht Altdorfer for a coloured woodcut, was Venetian in inspiration. Notes several cabinets (c1550-70?) decorated with embossed leather which feature on their facades several frames of this type with marble inlays, and which were imitated (more coarsely) in France.

Newbury.T., Basacca.G ., Kanter.L. Italian Renaissance Frames. The Metropolitan Museum of Art, New York 1990. p. 56. no: 27. The Friedsan Collection (32.174). France or Italy mid-16th century. Carved wood with polished marble inlays, painted in brown and mordant gilt; Solomonic columns of blue glass with cores of silvered paper and turned and gilt bases and capitals. 'Generally associated with the French court at Fontainebleau, particularly with miniature portraits by Corneille de Lyon (active 1534-74) and Francois Clouet (before 1522-1572), tabernacles of this sort, with their sumptuous inlays and colourful surfaces, derive from Italian prototypes and were frequently made in Italy. The use of pine for the structure of the present example suggests a possible North Italian origin.'

Kunstgewerbemuseum Berlin, containing an alabaster relief of the deposition K9178 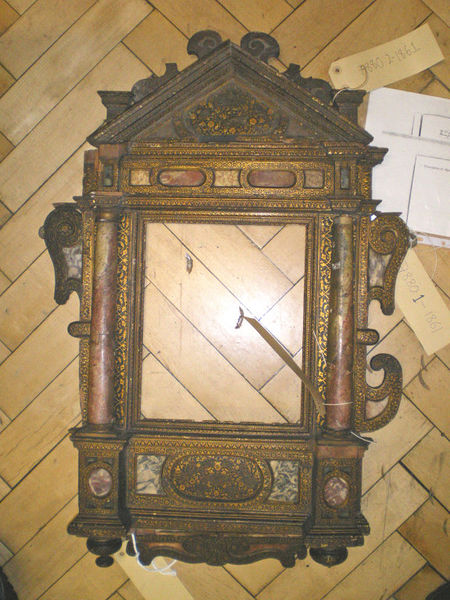