If you would like a larger file, or to use the image in other ways, contact our Licensing team.
+10
+8
images
On display at V&A South Kensington
Sculpture, Room 21, The Dorothy and Michael Hintze Galleries

Relief
1930 (made)
The Scandal relief and the Melchett fire basket (M.16-2005) were commissioned together by Henry Mond and his wife Gwen, later the second Lord and Lady Melchett. This ensemble was one of the most important artistic features within the remodelled interior of Mulberry House, considered at the time one of the most important Art Deco interiors in London. The Mulberry House renovations of 1930 were recognised to be one of the finest achievements of a fruitful collaboration between interesting and enlightened patrons, an innovative architect and a painter and sculptor, the latter two Royal Academicians and of outstanding importance in Britain. The reunification of these two exceptional works of art considerably contribute to an enriched and deeper understanding of British decorative arts of this period.

Charles Sargeant Jagger (1885-1934) has come to be regarded as one of the most outstanding British sculptors of the first half of the 20th century. In 1921 he was elected a member of the Royal Society of British Sculptors, which subsequently awarded him two gold medals. In 1926, he was made an Associate of the Royal Academy. He received both public and private major commissions until his career was abruptly terminated by his premature death in 1934. His most famous public commission was the Royal Artillery Memorial at Hyde Park Corner (1925). This is his masterpiece, while his most celebrated corporate commission was for the sculptural additions to the façade for ICI House, Embankment (1927). Unquestionably his most accomplished private commission was the Scandal relief and fire basket for the drawing room of Mulberry House, Westminster (1930). 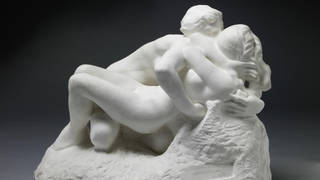 visit V&A trail: Out in the museum Until recently, the lives of LGBTQ people (Lesbian, Gay, Bisexual, Transgender, Queer) were largely invisible, or untold in museums. Selected by our LGBTQ Working Group and LGBTQ Volunteer Tour Guides, the objects in this trail reveal stories of diverse gender and sexual identities across ...
Object details