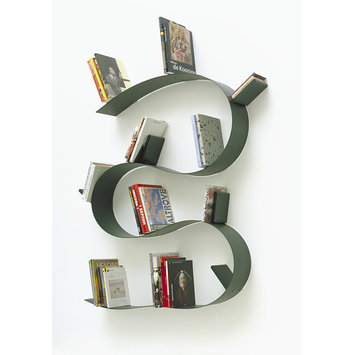 This bookshelf, designed by Ron Arad (born 1951), was originally unveiled at the Milan Furniture Fair in 1993. Although it was initally designed as a one-off piece in sprung steel, it was soon mass-produced in injection-molded PVC by the Italian manufacturer Kartell. It has since become one of Ron Arad's best-selling works. The design of the bookshelf allows users to individually adapt the shape of the final piece. When hung on a wall the curved shape of the 'Bookworm' can be manipulated by changing the position of the brackets.

The long curved section of plastic provides the shelving base for the books. Its shape can be manipulated and changed to fit into a certain space or achieve a desired look. The plastic itself is thin but has a wide depth for resting on books. The coil shape is interrupted in regular intervals by eleven small brackets which serve as book ends. Those brackets are hollow box-like structures which can be screwed to the board on either side. They also function as mounting brackets enabling attachment of the bookcase to a wall.

In 1993 Ron Arad designed two bookshelves in sprung steel; ‘This Mortal Coil’ (W.18-1993) and ‘Bookworm’. These were presented at the Milan Furniture Fair of that year. Whereas ‘This Mortal Coil’ was free-standing, ‘Bookworm' was wall-mounted. In 1995 Kartell began to produce ‘Bookworm’ in injection-moulded PVC.

Bookworm signified the beginning of a successful relationship between Ron Arad and Kartell, with Arad going onto design a number of futher products for Kartell, such as the ‘Lovely Rita’ bookshelf and the ‘FPE’ chair.

‘Although it began as another challenging, one-off piece, the Bookworm has become Arad’s best-selling design. Arad conceived the Bookworm in sprung steel, to make it both sculptural and functional, although in this form it was unreasonably demanding both to make and install, as well as quite expensive. Kartell took on the design and produced it in colourful, translucent, injection-molded PVC, thus making it accessible and attractive. The modular shelves could be tailored, like Arad’s early Kee Klamp constructions, to suit individual and spatial requirments, through countless ways of linking its three, five and eight-meter segments.’ Paola Antonelli, Ron Arad: No Discipline (New York:The Museum of Modern Art, 2009), p. 62.

Ron Arad was born in 1951 in Tel Aviv. He studied at the Jerusalem Academy of Art between 1971 and 1973. In 1973 he moved to London where he studied at the Architectural Association. Arad went on to establish One Off Design Studio with Caroline Thorman in 1981.

This rethinking of a static, cubic form – the traditional bookcase – into a fluid, live, sculptural shape is typical of Ron Arad’s inventive approach to furniture design.

Some of his products are one-offs or expensive limited editions, but the ‘Bookworm’ is mass produced and affordable (costing about £300 in 2012). It comes rolled up in a box, with fittings so it can be mounted on the wall. Customers then manipulate it into whatever form they prefer.
[01/12/2012] 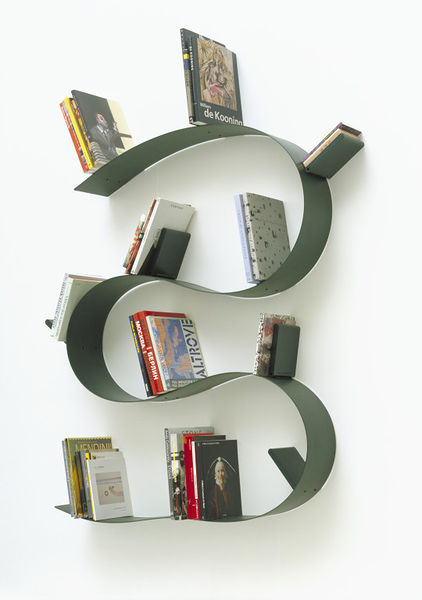