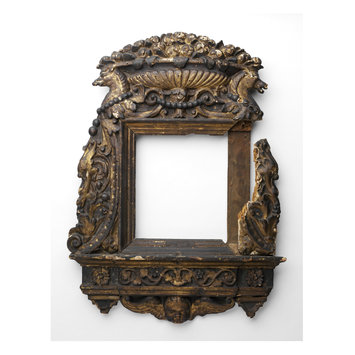 Separate wooden picture frames were used in Italy from about the 15th century, though they developed from earlier frames on altarpieces in both metal and wood. They were used to protect and enhance both secular and religious paintings.

As well as many picture frames acquired with paintings, the V&A acquired some frames - principally Italian Renaissance in origin or style - as independent objects. They were usually chosen for the fine quality of their carving and decorative effects, and many are gilded using various techniques. Many of the ornaments used are classical and architectural in origin.

This frame, though damaged (on the right side), regilded and discoloured, is a rare and interesting piece of Renaissance woodwork. Its shape and size, the evidence of a sliding panel to protect the mirror or panel within, and the remnants of wire hooks suggest that it may have been a 'restello', a kind of wall unit with toilet mirror. This was a type of luxury domestic furniture recorded in Venice from about 1450-1600. Typically it consisted of a wall mirror set into a wooden frame, richly decorated with painting and gilding. Along the lower edge were hooks from which were hung small costly articles for the toilette, such as comb or brushes, a stylus for parting the hair and perfume flasks.

Carved and originally water gilded frame thought to have been a restello.

Structure
The frame is made up of a softwood back frame which forms the structural support, to which lime or poplar pieces for the carved front frame are attached, held with cut nails driven in from the back.

The back frame is made of two vertical members which are joined with the horizontal members by a pegged T bridle joint. The central part of the joint is on the verticals. The inside of the back frame forms the depth of the rebate. The rebate width at the top, bottom and left corners has been slightly enlarged by cutting parts of the joints away to remove a little of the wood. The cut away area has darkened, indicating that this happened some time ago.

At the front of the frame, the top is made from one piece of wood. The sides are butt joined between the top and the predella at the top, through the scrolling acanthus leaf beneath the breast of the hippocamp and above the predella moulding at bottom.

The depth of the right side is thinner than that on the left and creates a slot between it and the back frame for a sliding panel. That would have concealed and subsequently revealed a painted panel or mirror fitted behind.

The corbels at the bottom of the frame are held with cut nails driven through the centre of each from the bottom. On the underside of the predella top moulding at the centre, there is a square hole left from a cut nail.

The frame has been extensively eaten by wood boring beetle and larvae, there are beetle flight holes of various sizes, the largest being approximately 2 mm in diameter. The larvae tunnels extensively undermine the structure and there is considerable wood loss. The top half of the right side is lost and here, the severity of the internal damage can clearly be seen.

Later Additions
A later addition, fabric covered, chamfered, softwood board has been inserted into the rebate. This was removed for photography.

Description of Ornament
Two cyma and fillet mouldings, one larger than the other, border the sight edge. The top is formed by a large gadrooned tazza overflowing with fruits, flanked by two hippocamp heads with scrolling foliage and beads around their necks. More beads are suspended from volutes below the tazza. An elongated scroll runs down the sides, terminating in a volute resting on the predella. Above the volute, there is more scrolling foliage with fruits, with a downward facing winged grotesque eating the fruit. A winged cherub head can be seen on the other lower side of the elongated scroll. The predella frieze is decorated with an undulate band of leaves and fruits, possibly grapes. The pedestals at either side of the frieze are decorated with a single patarea. An antependium carved with a winged cherub head is set between two corbels.

Inscriptions
On the bottom horizontal member at the back of the frame there is an armorial shield which is abraded. Below the shield an inscription reads: ‘DVS CASIMIRUS’. Other writing is visible however this is also worn; the following letters, largely in lower case Roman script can be seen, ‘verd litac Abox’ and below, ‘v…decea sa…

Decorative Finish
There are two decorative schemes. The most recent scheme is gilded and possibly silvered, applied on a red bole, on thin, white ground. The beads and the carved fruit on the sides and on the predella and some of the leaves in the tazza, appear almost black. These are thought to be silvered as bright silver was seen below this ‘black’ on beads and fruits on the sides. The silver leaf has probably tarnished and blackened through oxidation. The dark colour on the beads and fruits on the sides, however, could also have been the result of the darkening of a coating, perhaps once translucent and tinted with colour. The rest of the carved relief is decorated with burnished water gilding. In general, the surface of the gilding has been coated with a glue size, which is now dark and opaque, through a build up of dust that has become trapped in the surface of the size. On some areas of the gilding, however, the coating appears to be deliberately darker as if it had been pigmented. This can be seen on the tips of the leaves on the hippocamps’ necks.

On the background to the carved relief, a similar dark colour to that seen on the silvered areas was observed over a red bole on a white ground. It is not clear whether this dark surface also once contained silver. Samples were taken from the background for pigment identification but the results were inconclusive (Analyses carried out by Dr Brian W Singer, Northumbria University). The dark colour may be a paint containing charcoal or just dirt or a discoloured, corroded metal foil over a walnut oil or pine resin varnish or adhesive. The white ground layer beneath is gypsum.

On the carved relief, at areas of loss of the later finish, an original scheme was seen of water gilding on an orange-red bole, on a thin, white ground.

The back of the frame is decorated with red paint randomly applied over yellow paint on a very thin, white ground. This effect was possibly created by dabbing on paint with a sponge or rag. Similar paint effects have been found on the backs of some Italian cassone. (See, for example, painted and gilded cassone, c1430, V&A object number 8974-1863).

Hanging Device and Metal Fittings
At the back top centre, there are several holes. Two of these are drilled diagonally and emerge at the top edge. These were possibly used for a cord or ribbon hanging. The other holes, at the top left and right and bottom centre, are from more recent hanging fittings.

On the front, on the bottom predella moulding, there are remnants of two wire hooks. These were possibly added for a picture label. Alternatively, they are possibly earlier hooks for candles or hanging items, associated with restelli such as grooming devices or personal ornaments. (Jeffries, J. and Romano, D. Venice reconsidered: the history and civilization of an Italian city-state. Baltimore: Johns Hopkins University Press, 2000. p. 315).

Softwood and lime or poplar, carved and water gilded

DVS CASIMIRUS
On the bottom horizontal member at the back of the frame there is an armorial shield which is abraded, below which this inscription runs. Other writing is visible however this is also worn; the following letters, largely in lower case Roman script can be seen, ‘verd litac Abox’ and below, ‘v…decea sa…

Conclusion and Observations (taken from Powell and Allen, 2010)

The shape of the frame and remnants of hooks lead to the conclusion that this is a frame is most likely to be a restello. This was a piece of furniture that was invented in the 15th century which, typically, consisted of a wall mirror set into a wooden frame. It was often richly decorated with painting and gilding, with hooks from which articles for the toilette were hung.
.
“… hairbrushes, combs, code (horse tail switches to clean combs), scriminali (styli or needles of bone, glass or silver for parting the hair), azebellino (a small fur to hold in the hand), profumegolavorado da pomo colla sua cadenella (a perfume ball on a chain), paternostri (rosaries), spugnette (sponges), bottigliette di profumi (perfume bottles), vasetti di pomette (glass jars of pomade).” (Jeffries, J, Romano, D Venice Reconsidered: The History and Civilization of an Italian City state, JHU Press, 2000. p. 315).

A digitally reconstructed image of this frame, showing its right side replaced is included in Powell and Allen, p.192.

Comparable Frames
All the frames below have columns on the sides near the sight edge.

A drawing depicting hippocamps whose form is echoed in the carved hippocamps on the this restello. See Neptune, c1504 by Leonardo Da Vinci (1452-1519). The Royal Collection. 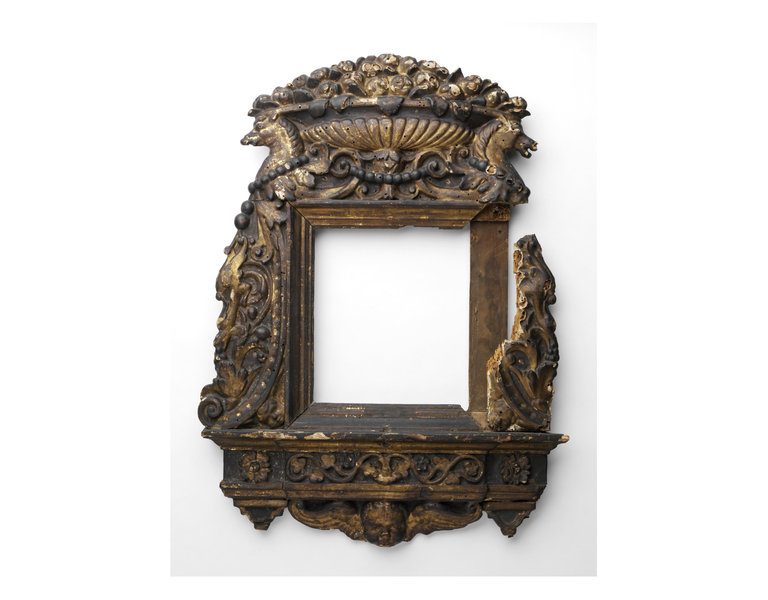