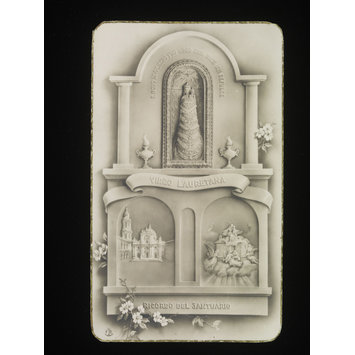 In art historical terms, a black Madonna is a painting or sculpture depicting the Virgin Mary with dark or black skin, created in Europe in the late medieval period, or sometimes an older image whose documented popular cult dates from that time. Some are made of dark or black materials such as ebony, others are said to have become blackened from the soot of candles, although this explanation and the significance of the Madonna’s skin colour is contested. There are several hundred black Madonnas in Europe. The topic of black Madonnas has attracted a considerable literature in recent decades approaching the subject from the perspective of various academic disciplines including anthropology, psychology, art history, feminism, and Black history.

The Basilica della Santa Casa (Basilica of the Holy House) is a shrine in Loreto, Italy, where the house in which the Blessed Virgin Mary is believed to have lived is preserved. Local lore recounts that the house was miraculously flown from Palestine to Loreto by angels just before the final expulsion of the Crusaders from the Holy Land. According to this narrative, the house at Nazareth in which Mary had been born and brought up, received the Annunciation, and had lived during the childhood of Christ and after his Ascension, was converted into a church by the Twelve Apostles after her death. In 336 the Empress Helena made a pilgrimage to Nazareth and directed that a basilica be erected over it, in which worship continued until the fall of the Kingdom of Jerusalem.

The legend relates that, threatened with destruction by the Turks, the house was carried by angels through the air and initially deposited in 1291 on a hill at Tersatto (now Trsat, a suburb of Rijeka, Croatia), where an appearance of the Virgin and numerous miraculous cures attested its authenticity. In 1294, angels carried it again across the Adriatic Sea to the woods near Recanati; from these woods (Latin lauretum, Italian Colle dei Lauri or from the name of its proprietress Laureta) the chapel derived the name which it still retains (Sacellum Gloriosæ Virginis in Laureto). From this spot it was afterwards removed to the present location in 1295. It is this house that gave the title Our Lady of Loreto sometimes applied to the Virgin; the miracle is represented in religious art and popular iconography with the house borne aloft by angels, sometimes with the picturesque detail of the Virgin and Child enthroned on the roof.

The documented history of the house dates from at least the close of the Crusades. It is briefly referred to in the Italia Illustrata of Flavius Blondus, secretary to Popes Eugene IV, Nicholas V, Calixtus III and Pius II; a fuller account appears in the Redemptoris Mundi Matris Ecclesiæ Lauretana Historia by a Teremannus, which is included in the Opera Omnia (1576) of Baptista Mantuanus. Bulls in favour of the Shrine at Loreto were issued by Pope Sixtus IV in 1491, and by Julius II in 1507, the last alluding to the translation of the house with some caution, 'ut pie creditur et fama est'. In the late 17th century, Innocent XII appointed a missa cum officio proprio (a special mass) for the Feast of the Translation of the Holy House to be celebrated on December 10th.

The statue of Our Lady of Loreto enshrined in the Holy House is a black Madonna carved from Cedar of Lebanon and, like the Holy House itself, has a miracle-working reputation. In the 1600s a mass and a Marian litany was approved. This 'Litany of Loreto' is known more widely as The Litany of the Blessed Virgin Mary, one of the five litanies approved for public recitation by the Church. In 1920 Pope Benedict XV declared the Madonna of Loreto patron saint of air travellers and pilots (presumably because of the miraculous flight of the Holy House). The current statue is a modern replacement for an older one that was destroyed in a fire in 1921. It was granted a Canonical Coronation in 1922 by Pope Pius XI. This holy card was published some time after that as a souvenir of the shrine and its new statue.

Rectangular holy card (portrait format) printed on parchment paper with rounded corners and gilt edges, monochrome illustration of a two-tier, arched, bas-relief altarpiece. Above: statue of the Black Madonna of Loreto in an apsidal niche between two burning lamps and two pillars, lettered over the niche E NOVO SIMULACRO TUO VIRGO ORBI PACIS IRIS REFULGE and below within a ribbon banner VIRGO LAURETANA. Below: (left) view of the Basilica of Loreto; (right) illustration of the legend of the miraculous translation of the Holy House from Nazareth to Loreto; lettered below RICORDO DEL SANCTUARIO. Informal sprays of flowers decorate the altarpiece. Marked with Fratelli Bonella logo in the bottom left corner.

Lithography and gilding on parchment paper

VIRGO LAURETANA
Lettered within the design 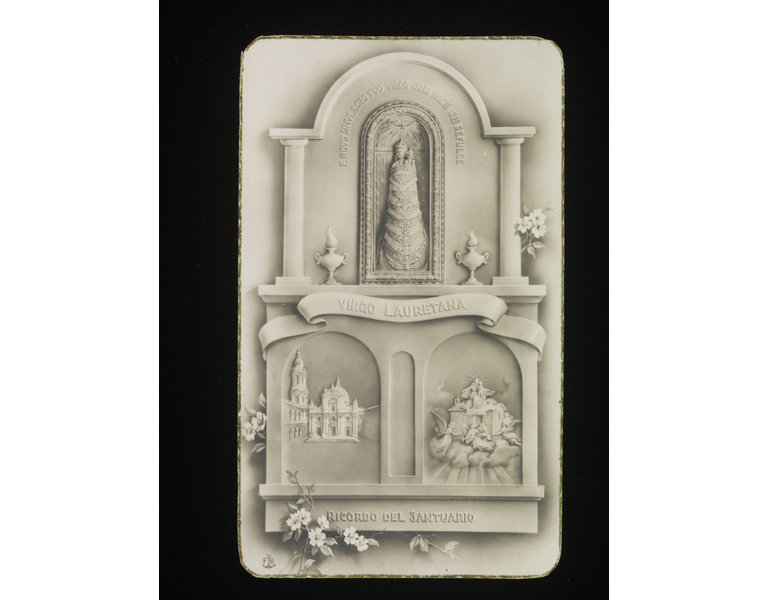