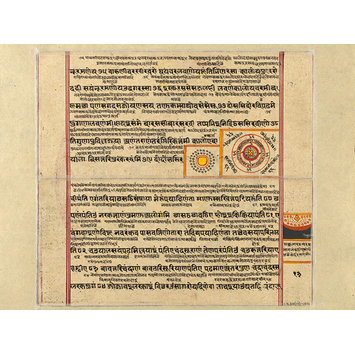 The Sangrahanisutra is a cosmological text composed in 1136 by Shrichandra that includes Jain ideas about the structure of the universe and the mapping of space. The manuscript, made in the eighteenth century, includes illustrations and cosmic diagrams.
On the recto of this folio is one half of a cosmic chart showing the dvipas, or continents. The other half of the chart is on the previous folio (IS.35:14-1971). There are believed to be two and a half continents, arranged concentrically and separated by two ring-shaped oceans. Rivers can be seen flowing into the oceans and mountain ranges appear as lines on the diagram. At the centre is Mount Meru, the cosmic axis, depicted here in yellow. The part of the universe shown here, which is that inhabited by humans, is imagined as being in the centre of the universe, below the heavens and above the hells.
On the verso is text with a small stellar diagram on the right.

A complete illustrated manuscript of the Samgrahanisutra or Sangrahanisutra, a Jain cosmographical text in Sanskrit composed in A.D.1136 by Shrichandra Muni, whose name appears on f.52 of this copy. The work is also named at the end as the Trailokya dipi, which is more usually applied to the Sangrahani Sutra of Jinabhadragani Kshamashramana, the earliest work of this class. The work is accompanied by an interlinear text in smaller devanagari script, which is possibly the commentary of Devabhadra. This manuscript is written on 56 oblong folios of paper of which two folios (10a and 12a) are not numbered, the last numbered folio being 54. The outer folios are of double thickness and decorated with a central ogee medallion and floral motifs on their outer faces. The copy is undated but appears to have been written and illustrated in Western India during the 18th century.
This folio (1) recto is a chitraprshthika painting (a cover design).
Folio 1 verso (numbered 1) is text.

Painted in ink and paint on paper

PAGES FROM A SAMGRAHANISUTRA MANUSCRIPT.

Like the large painting above, this painting shows the mortal realms. It appears to have been painted on one sheet of paper and then cut in half to form two separate pages of the manuscript. Rather than being bound along the left edge like a Western book, the manuscriptpages were unbound and were turned along a horizontal axis along the top edge.

Humans dwell in two and a half continents (adhaidvipa), separated by two concentric rings of ocean and bounded at the edge by mountains. At the very centre is the towering Mount Meru. Each continent is divided by rivers and mountain ranges. Bharata (India) is in the south of the inner continent, Jambudvipa, which has four pairs of promontories protruding into the surrounding ocean. Four gigantic pots can be seen floating in the sea. They cause the tides in the Lavanasamudra (Salt Ocean).

These pages are from the same Samgrahanisutramanuscript as the two lower ones to the left. [14/05/2010] 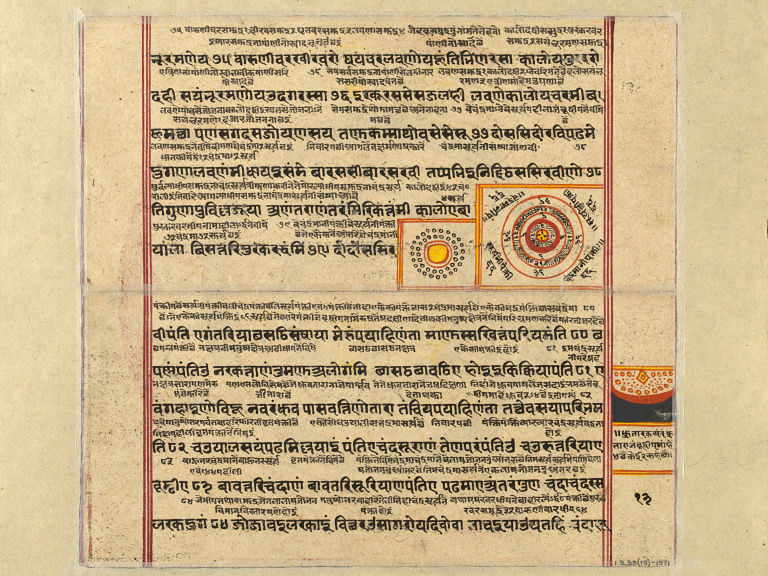