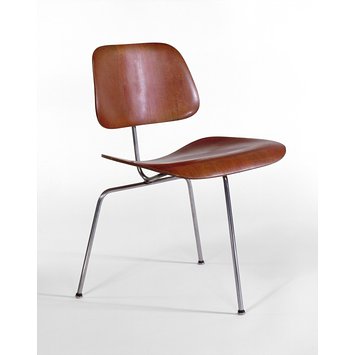 This chair is one of very few prototypes which were created at a time when Charles and Ray Eames were experimenting with moulded plywood. Various processes were tested in order to achieve a successful design, one that was inexpensive and utilised industrial technologies that had been developed during the war. This design was not put into production due to problems of balance and stability. A four legged design was introduced and put into production a year in 1946. The use of steel and plywood was a common feature of many of the Eames' designs.

Steel rod three legged chair with red stained moulded Canaletta plywood seat and back.
The single front leg is made from a separate piece of steel that curves underneath the seat and up to support the back of the chair. The back two legs are made from one piece of steel bent in a U shape. The seat and the back are made from two separate pieces of gently moulded plywood attached to the steel frame with rubber shock mounts.

EVANS
Label on base

Developments during the war years were linked to the advances in the plywood designs of Charles and Ray Eames. During the second world war Charles Eames was involved in the design of plywood splints for the Navy (an example of the Leg Splint is in the V&A's collection: W.49-1983). This led him “further into the investigation and exploration of plywood molding technology.” (Neuhart, The Story of Eames Furniture, 2010, p, 305.) Eames was also able to take “full advantage of the latest advances in a number of technologies”, this included new synthetic adhesives and resins. (p. 333.)
By mid-1945, a number of prototype chairs, “formed in a variety of core and finish veneers into several compound molded shapes in one and two piece combinations, were being tested informally for manufacturing feasibility as well as for comfort and stability.” (p. 335.) It was decided that this prototype was unsuitable for production.

This design was exhibited in a 'press and trade preview' of the Molded Plywood Division of Evans Products at the Barclay Hotel, New York, December 1945, at the Architectural League, New York, February 1946, and in the exhibition 'New Furniture Designed by Charles Eames', MoMA (NY), 13 March-31 March 1946. For illustration of chair in the MoMA exhibition see Neuhart, Neuhart and Eames, Eames Design (London: Thames & Hudson, 1989), p.69 (behind the dining table) where the three-legged chairs are referred to as 'prototype chairs'. For further discussion see the same book, pages, 60-61, illustrated on p.60. According to p.61, 'After the showings, the three-legged and tilt-back chairs were reluctantly eliminated from the collection due to problems of balance and stability'.

Manufacturer: The Molded Plywood Division of the Evans Products Company was, essentially, the former Plyformed Wood Products company of Venice, California, a small firm founded by in 1942 Charles Eames and John Entenza to make Eames plywood designs for the US Navy. In 1943 it became a larger partnership with co-workers Margaret Harris, Griswold Raetze, Gregory Ain and Marion Overby. When awarded a contract to produce for the US Navy 5000 plywood leg splints, Eames negotiated the take over of the firm by Evans, a large manufacturer of wood products for industry, which had the experience and raw materials necessary to fulfill such contracts. The Molded Plywood Division of Evans, though enlarged by the addition of financial and managerial staff from Evans, remained an Eames operation. Their second premises at 901 Washington Avenue in Venice, eventually became the Eames Office. (See Neuhart, The Story of Eames Furniture, pp.305-324).

Side chair with single front leg, designed by Charles and Ray Eames, 1945

This design is a prototype of a design never put into production due to the instability of its three-legged design. Not until 1946 did the Eameses arrive at a final production version, an example of which is exhibited in this bay.

Designed by Charles Eames in 1944, made by Evans Products Co., whose label it bears. This chair is one of a very few prototypes made in 1944, another version with the single leg at the back is illustrated here. Both these three legged chairs were found to be unstable and this a four legged version was designed which went into production in 1946. For comparison the Museum's example of the four legged chair is displayed here.

The chairs to the left by Aalto and Summers are moulded in two dimensions. Charles and Ray Eames perfected the three-dimensional moulding of plywood.

Within a wooden mould, stacks of thin, glued-up veneers were pressed between an inflatable rubber bag and a layer of metal to create seats and backs. [01/12/2012]

The production process for the chair is described in Neuhart, Neuhart and Eames, Eames Design (London: Thames & Hudson, 1989), pp.59-61 as follows:

'The molding [sic] process for the chairs was essentially a refinement of earlier experiments. Thin sheets of wood, roughly cut to shape, were coated with a plastic binder and placed on top of one another, The wood grain of each of the successive layers (a 5-ply thickness was judged to [60] be the best aesthetic and functional choice) ran counter to the one above it to increase the strength of the plywood "sandwich", which was then positioned over an inflatable neoprene and canvas air bag and beneath a metal mold [sic] filled with a synthetic heating oil...

On top of the air bag was a neoprene blanket with a nichrome-wire heating element cemented in its center [sic]. Above the heating elements was a canvas caul that received the precoated [sic] plywood lay-up. A plaster mold at the bottom of the machine formed the bottom half of the male/female mold. Once the wood and glue sandwich was clamped into the machine, compressed air inflated the rubber membrane, slowly (to avoid breakage) pressing the plywood into the curves of the mold. The heat from the lower pad fused the wood sheets into a single piece. While the pressure was maintained, the hot oil at the top cooked a melamine finish into the upper and lower plies of light woods. (Dark woods were sprayed with a finish.) Ten minutes were required to mold the 5-ply chair backs and seats, which were 5/16-inch thick...

Lengthy experiments were conducted over a period of years in an attempt to apply the electronic cycle-welding process (first developed by the Chrysler Corporation in the 1930s), which used radio frequencies to transmit heat to a bonding agent placed between two parts, thereby bonding them together in a touch, waterproof, permanent joint. The attempts to use this technology to fuse the rubber connectors, or shock mounts, to the molded plywood chair backs, spines and seats were only partially successful (pp.52-53), and a satisfactory mass-production technique for connecting the parts of the chair was finally achieved on the assembly line by gluing the shock mounts to the wood pieces with a resorcinol phenloic adhesive applied with heat and pressure [it is unclear if our chair was made in this manner as it preceded large-scale production].' 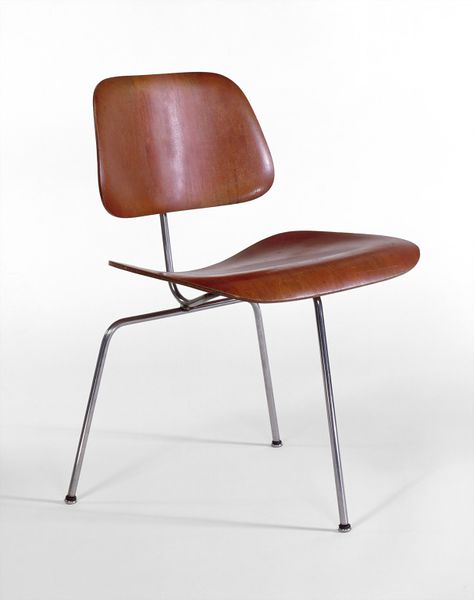