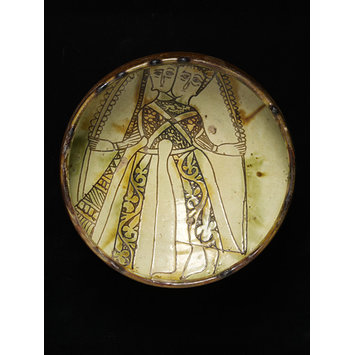 At the end of the twelfth century, Cyprus was conquered by Crusaders, whose descendants ruled for almost 400 years, from 1191 to 1571. During that time, Cyprus became the most important commercial centre in the east Mediterranean, acting as the principal trading hub between Western Europe and the countries of the Levant, orchestrated through Italian-dominated maritime traders. During this period, production of ceramics flourished, supplying local demand, but international markets, as the Cypriot wares are frequently found in excavations throughout the Mediterranean region.

This bowl depicts a couple sharing or adopting a garment, a custom which is associated with Armenian traditions, particularly as part of wedding ceremonies. Similar depictions are widespread on sgrafito (sgrafiato) wares made in Medieval Cyprus, based on a tradition introduced from Armenian Cilicia. There are often called "wedding bowls".

The two principal production centres were at Lemba, near Paphos, in the south west of the island, and at Lapithos, in the district of Kyrenia on the north coast. In addition, there was probably a production centre at Kato Paphos and at Enkomi, near Famgusta, but the evidence for these centres is not as well preserved as at Lemba and Lapithos. The medieval glazed pottery of Cyprus is a local variation of late- and post-Byzantine pottery and shares the same basic features as ceramics produced in the rest of the Byzantine world. It also has affinities with the so-called "crusader" pottery of Syria and Palestine and shows evidence of considerable western influence, particularly in the decorative subject matter.

Bowl, red earthenware, of shallow form with short straight inward tapering sides, covered with a thin white slip opacified with tin oxide. The interior is incised with two conjoined standing figures using a stylus, other details have been carved away with a broader gouging tool. The male figure wears a close-fitting turban, and a calf-length tunic, while the female figure has her hair in a long braid wrapped with narrow strips of cloth, her garment covers her feet. The figures are joined at the chest, and each hold long palm branches. Details are added in copper-green, brown-iron and purple-manganese oxides, under a clear honey-coloured lead-glaze, which have flowed during the firing process.

MA/I/B3180 - Nominal File
Letter from Spink & Son (23 June 1933), stating that this bowl had recently been found in Cyprus and the price was £45.
Director L. Ashton writes to curator B. Rackham, that it is a fine example of a late Byzantine bowl with sgraffito design of a hermaphrodite, probably from Cyprus. It is in fine condition with the exception of one small piece missing. Rackham replies to the Director that it is a type found in Cyprus and attributable to the 14th century or perhaps earlier.

Cyprus was conquered during the Third Crusade in 1191 and remained in Western hands until 1572, when it fell to the Ottomans. Pottery was made on the island during the early centuries of the Byzantine Empire but glazed pottery does not appear until the early years of the 13th century, according to archeological finds. Until the late 13th century, Cypriot ware seems to have been decorated with only a single coloured glaze. At the end of the century we find objects with yellowish brown and green streaks, following the outlines of the incised decoration. The glazing and style of decoration is close to that produced at al-Mina, also known as Port Saint Symeon (Port St. Simeon) ware. Cypriot pottery was exported in large numbers to the Latin settlements in the Holy Land. It is the most common import found in excavations in Jerusalem.

Bowl of red earthenware covered with a white slip and incised with an image of two conjoined figures. Cyprus, 1275 to 1325

The potter used a gouge to carve away the elaborate details of the clothing. 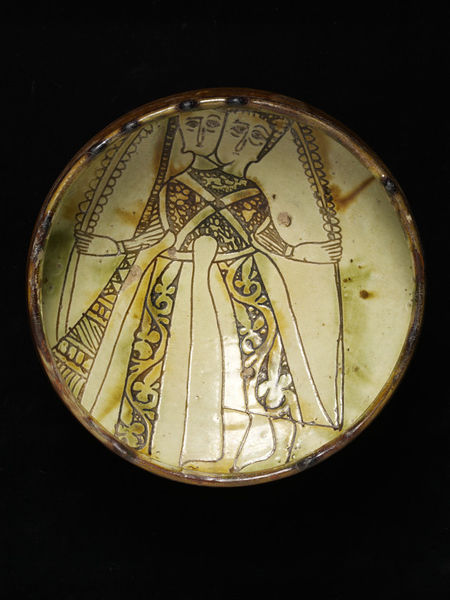